Danish midfielder Eriksen is in a stable condition in hospital, the Danish FA have said, after dropping to the ground at the Parken Stadium shortly before half-time of the Group B fixture, leaving players from both teams in clear distress.

Finland beat Denmark 1-0 in their first major tournament game, but the Euro 2020 match will be remembered for Christian Eriksen, who is now in a stable condition after collapsing on the pitch.

Denmark and Inter Milan midfielder Eriksen is in a stable condition in hospital, the Danish FA said, after he dropped to the ground at the Parken Stadium shortly before half-time of the Group B fixture, leaving players from both teams in clear distress.

English referee Anthony Taylor immediately called medics on to the pitch and Eriksen underwent prolonged treatment with compressions performed on the chest of the Inter Milan player before he was taken to hospital.

The Danish Football Association later provided an update on the 29-year-old's condition and revealed the match would be completed on Saturday night, as requested by both sets of players.

Players emerged at 7.30pm to resume the game, which had been halted at 5.43pm, playing the remaining few minutes of the first half and taking a five-minute half-time. 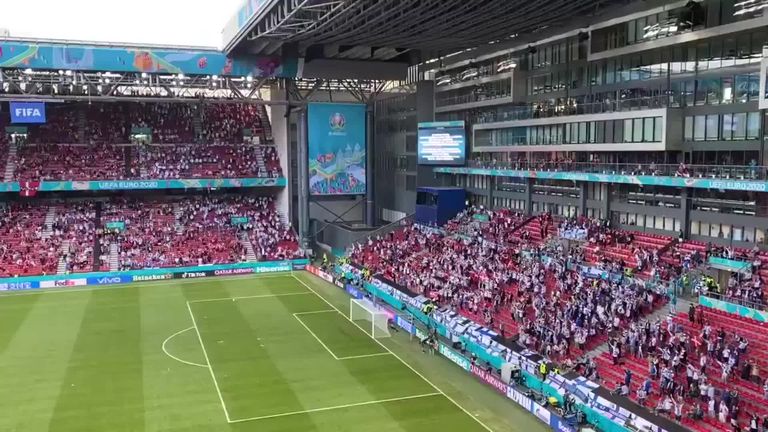 Denmark and Finland fans chant Christian Eriksen's name after the midfielder was taken to hospital, having collapsed on the pitch

Finland, appearing in their first major international tournament, scored against the run of play with their first attempt on goal on the hour mark. Jere Uronen's left-wing cross was headed home by Joel Pohjanpalo from eight yards out, slipping through the grasp of Kasper Schmeichel.

Denmark were awarded a penalty with 18 minutes remaining as Poulsen went down after a slight clip from Paulus Arajuuri, but Tottenham midfielder Pierre-Emile Hojbjerg struck his spot-kick into the hands of Lukas Hradecky, who guessed correctly.

Eriksen 'awake and stable' in hospital after collapsing

Christian Eriksen is "awake" and undergoing tests in hospital after collapsing on the pitch as Denmark's opening Euro 2020 match against Finland was temporarily suspended just before half-time.

The 29-year-old's condition has been "stabilised", according to tournament organisers Uefa.

A statement from the Danish FA also read: "Christian Eriksen is awake and his condition remains stable. He remains hospitalized at Rigshospitalet for further examinations.

"The match against Finland will be played tonight (Saturday). This happened after the players had it confirmed that Christian is okay."

UEFA confirmed players from both sides requested the Group B encounter be finished, which was goalless just before half-time.

5.43pm: Christian Eriksen collapses on the pitch as he goes to control a throw-in. English referee Anthony Taylor, as well as both sets of players, instantly see the severity of the issue and call on medical staff

Eriksen receives CPR from the medical staff, as well as electric current shocks.

Denmark's players, visibly emotional, form a wall around Eriksen and the medical staff to maintain the privacy of the scene

5.59pm: UEFA confirms the game has been suspended due to a medical emergency

6.15pm: Pictures, taken by Friedemann Vogel of AFP, emerge of Eriksen being taken off the pitch on a stretcher, with his eyes open and his head up

6.26pm: UEFA says Eriksen has been 'stabilised in hospital' and confirms a crisis meeting with teams and players

7.03pm: Denmark's official account tweets to say Eriksen is awake and in for further examinations at Rigshospitalet Hospital in Copenhagen, 1km from the Parken Stadium

7.13pm: UEFA confirms game will go ahead at 7.30pm following "request made by players of both teams". The tweet also said: "This happens after the players have been confirmed that Christian is okay."

7.20pm: Both sets of players emerge to warm up for the remainder of the first half, with many of the 16,000 fans still in the stadium singing Eriksen's name

7.30pm: Just over one hour and 45 minutes after Eriksen first collapsed, the game restarts in the 42nd minute, with a five-minute half-time break

8.35pm: Eriksen is named player of the match as Finland win the resumed game 1-0

Denmark host Belgium in Copenhagen on Thursday at 5pm, while Finland now face Russia on Wednesday in their second Group B game at 2pm in St Petersburg.