Colin Kazim-Richards celebrated signing a new contract at Derby with a brilliant late strike to earn the Rams a point after a 1-1 draw with Nottingham Forest in the East Midlands derby.

Wayne Rooney's team had fallen behind against the run of play in the 33rd minute, when James Garner's shot escaped the grasp of David Marshall and nestled in the back of the net, shortly before the goalkeeper was substituted due to a back injury.

But 34-year-old Kazim-Richards - who had signed an extension until the summer of 2022 earlier in the day - took advantage of a fortunate touch from Forest's Tobias Figueiredo to blast home and restore parity six minutes from time.

A point apiece moves both sides further away from the relegation scrap, with Forest up to 14th on 40 points and Derby up to 17th on 38 points.

How another East Midlands derby ended all square

With four draws from the last seven meetings, recent history suggested a cagey encounter might be on the cards at Pride Park and the fact it took more than 20 minutes for either goalkeeper to make a save made that eventuality all the more likely.

Derby were the more confident on the ball, though, and perhaps should have earned a penalty midway through the first half when Kamil Jozwiak's shot appeared to be blocked by the arm of Yuri Ribeiro. Their appeals, however, were turned down by referee Oliver Langford.

Just after the half-hour, Forest nudged in front against the run of play. The move started when Joe Worrall's header evaded Andre Wisdom and Matt Clarke, with Garner hitting a shot that squirmed under Marshall and into the back of the net.

Not only did the goal knock force a shift in momentum, Derby were dealt a second blow when Marshall was taken off with a back injury and replaced by Kelle Roos shortly before the break. The Dutchman was almost immediately caught out by another strike from Garner, but recovered quickly to reclaim the shot he had spilled before Glenn Murray could pounce.

There was a more front-foot approach from Forest after the break, yet it was Derby who went agonisingly close when Kazim-Richards collected a pass from Jason Knight and rolled a shot that beat Brice Samba and trickled past the far post.

With six minutes to play, they finally pulled level with their local rivals. Former Turkey international Kazim-Richards showed determination to pressurise Figueiredo and control Lee Gregory's flick, which paid off when the ball broke kindly for him and he hit a dipping shot over the line from 20 yards out.

The game then sparked into life in the immediate aftermath, as Anthony Knockaert headed wide for Forest and Lee Gregory volleyed off target following a slick exchange with Patrick Roberts, but no winner could be found.

"Everyone wants to win the derby, but it's a positive not to lose it. On the balance of play, we're more disappointed than Derby would be."

"Let's not kid ourselves, though. We didn't play Barcelona - it was Derby. I think we needed to stamp our authority on the game." 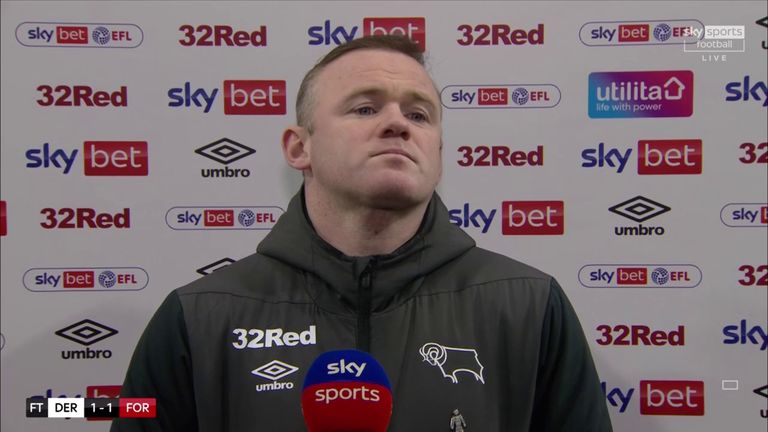 Derby's Wayne Rooney: "I thought, for 30-35 minutes, we played excellent. Forest were struggling to deal with how we were building up and causing them problems and then we gave a silly goal away. For the rest of the first half, we let our heads go down. I said at half time I wanted to see a reaction - I still felt we could win the game.

"In the second half, we weren't good enough. We were second to second balls, we were taking chances at the back and they almost broke three or four times on us. I think, second half, we were lucky to get out of here with a point, but in the scheme of things, that was probably a fair result." 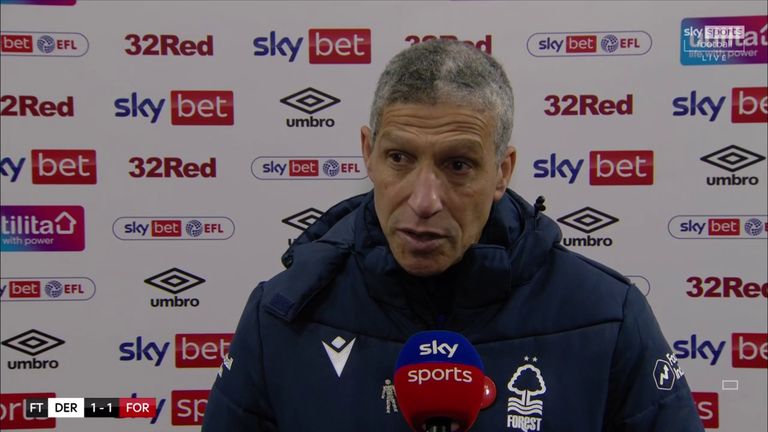 Nottingham Forest's Chris Hughton: "That's a big disappointment. I thought they edged it first half in possession, but never really threatened the goal so from that aspect, I think we had to be happy with it. I think we needed to press a little bit more, get a little bit closer and put ourselves in a position to create a few chances.

"As the game opened up in that second half, I thought we were the better side. The big disappointment for me was that we needed that second goal because the goal that the lad scored can happen - it was a great strike. At that stage, I think we should have been further ahead or should've been in a position to get further ahead. That's the biggest disappointment because, as the game opened up, I thought it opened up in our favour."

Both sides are next in action on Tuesday, March 2. Derby travel to the Cardiff City Stadium to take on Cardiff at 7pm, while Nottingham Forest host Luton at the City Ground at 7.45pm. Both matches will be available live on Sky Sports Football Red Button.