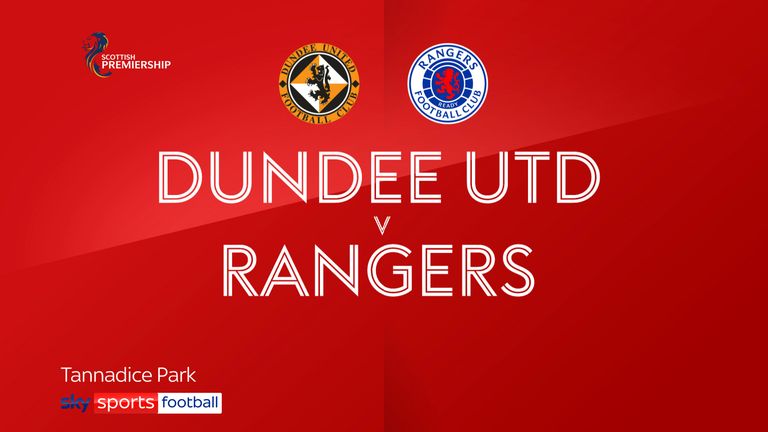 Rangers' impressive season continued as they strengthened their grip on top spot in the Scottish Premiership with a 2-1 victory at Dundee United.

Victory sees Rangers, who remain unbeaten in the league, remain 13 points ahead of second-placed Celtic, who have two games in hand.

Steven Gerrard's side took the lead in the 26th minute through James Tavernier's stunning free-kick but they were pegged back seven minutes later by Liam Smith's volley (33).

The visitors restored their advantage just before the half-time interval when Connor Goldson headed home Tavernier's free-kick, and despite Rangers' best efforts in the second half, it proved to be enough to seal all three points at Tannadice Park.

Meanwhile, Dundee United stay sixth after their seventh defeat of the season.

Last time the teams met back in September, Micky Mellon tried to go toe to toe with Rangers and paid a heavy price as his Tangerines slumped 4-0 at Ibrox. This time, the United boss had learned his lesson and took a more cautious approach.

Man of the match: James Tavernier

Yet it was the hosts who threatened the opener first. Adrian Sporle's corner was missed by Goldson while his defensive partner Leon Balogun had to throw himself in front of Mark Connolly's strike. The rebound fell to Mark Reynolds but Steven Davis blocked on the line before Kemar Roofe finally cleared the danger.

Alfredo Morelos was on the charge soon after as he drove forward from halfway before drilling just wide. But the Colombian, who was shown a yellow card, could have been given his marching orders in the 12th minute after his elbow caught Connolly's face.

There was another close escape for the visitors when Allan McGregor and Balogun collided as they raced to get to Ian Harkes' long ball before Marc McNulty. With the pair sprawling and the goal lying empty, however, Smith could only shoot wide from distance.

The visitors were beginning to look light on ideas - but then up stepped their captain with another moment of brilliance in the 26th minute. Connolly's trip on Roofe was 30 yards out from goal but Tavernier found the whip to arc the free-kick over the wall and past Benjamin Siegrist for a sensational opener.

United responded with a well-worked goal of their own seven minutes later as Mellon's team became the first Scottish side since Motherwell back in September to score against Gerrard's team. Harkes sent the ball out wide for Robson. Borna Barisic had eyes only on McNulty as the cross came in and totally missed Smith sneaking in behind him to fire the ball in off the far post.

Rangers were back ahead a minute before the break as Tavernier again produced a big moment. Brought down by Sporle, it was the skipper's set-piece which found Goldson as the defender peeled towards the front post to flick home with his head.

Another speculative Morelos shot skipped wide while Goldson blazed a loose ball over from six yards as Rangers dominated the opening stages of the second period.

Morelos has not scored a league goal for almost three months and let another big chance to break his drought slip by as the ball got stuck under his feet when Roofe's chip found him in the box, with Siegrist racing from his line to smother.

Another swing at fresh air proved to be his last involvement as Cedric Itten was introduced by Gerrard. The Switzerland striker almost made an immediate impact as he went past the 'keeper before teeing up Scott Arfield but Connolly prevented the third with his goal-line clearance.

Dundee United manager Micky Mellon on whether Alfredo Morelos should have been sent off: "I wouldn't want any other manager trying to get my players sent off. That's for other people. I'm just concentrating on Dundee United and us trying to get better. We are 17 games into this level and we're a developing group who will keep getting better. We will attract good players in bring through some excellent talents from our academy." 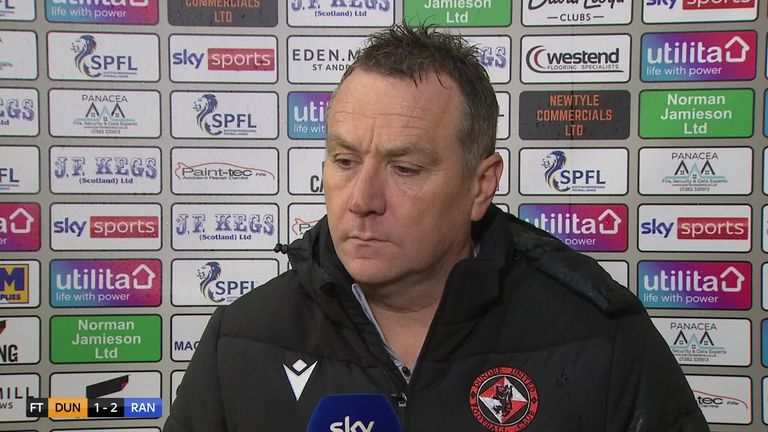 Rangers boss Steven Gerrard: "That was our third game in a busy week and I didn't expect us to be perfect. I am proud of the performance.

"Sometimes you have to win ugly and I thought we did that. We had a few issues from crosses - and it was a great finish from the Dundee United lad - but we didn't feel sorry for ourselves and got the three points. It's all positive."

On whether he breathed a sigh of relief when Morelos avoided a red card: "No, not really. I haven't looked at the incident back, but I remember it in normal play. It was a foul and the referee's dealt with it with a yellow card. I don't think there's anything else to say on it." 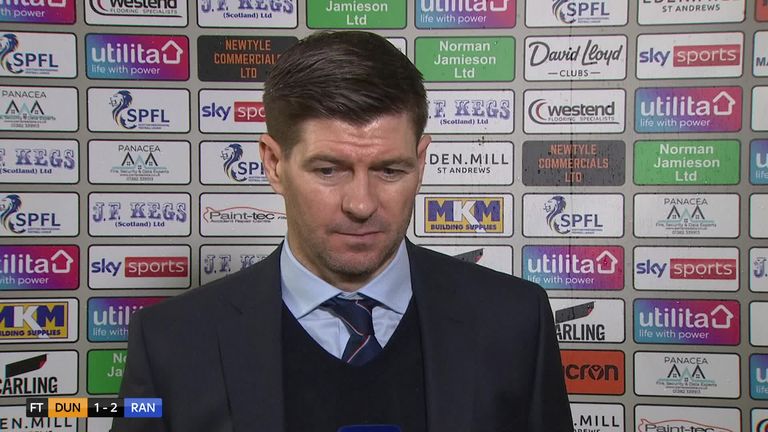 Should Morelos have seen red?

"Steven Gerrard said in his post-match interview he hadn't seen it, but once he sees it, I think he will change his mind.

"If Morelos catches him with the first one then I think you can say 'okay, you are challenging for the ball', but it's the little lash out afterwards.

"Throwing your elbow right across somebody's face and endangering them, he's very lucky to stay on the pitch - very, very lucky." 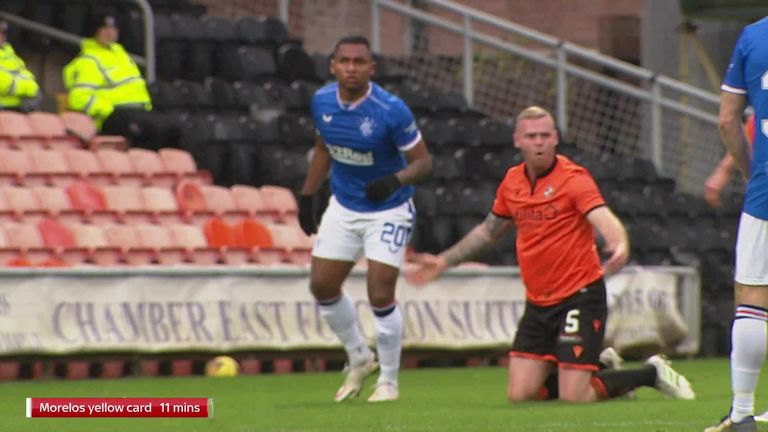 The panel discuss whether Rangers' Alfredo Morelos should have given his marching orders for this tackle on Dundee United's Mark Connolly.

Man of the match - James Tavernier

Tavernier again underlined his player-of-the-year credentials with another goal and an assist at Tannadice Park.

It was his 17th goal of the season in all competitions and the 13th goal the right-back has set up this term.

"His form is exactly where we want it. He's been sensational since the first game of the season. Again, he pops up with an assist and a goal. The goal is world class. it doesn't matter who you are or who you play for, if you can execute a free-kick like that into the top corner with that amount of dip and speed, it's a world-class moment. And he comes big for in the second goal again." 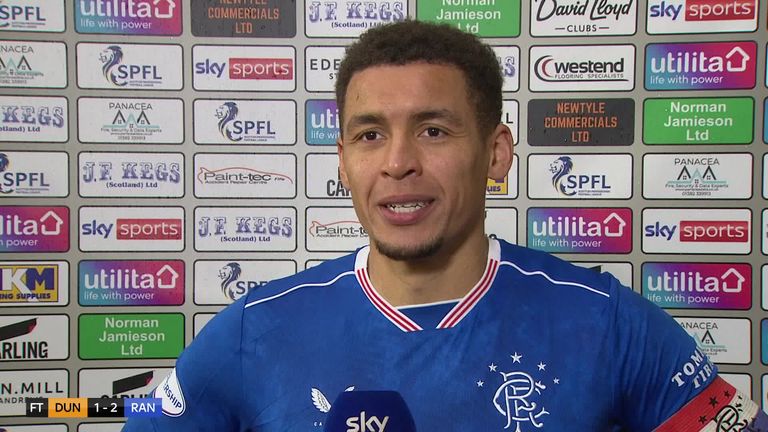 "For Rangers, over the years, he's become a very important player. I know he has been vilified by his own support for a lack of defending, but Rangers are attacking that much, especially this season, and he's a huge part of that."

Dundee United are back in action in the Scottish Premiership next Saturday when they travel to Hibernian at 3pm.

Save over 25% when you buy a NOW TV Sky Sports Pass for just £25 a month. Cancel anytime.