Match report and highlights as Celtic win 3-0 at Dundee United to move back within four points of Rangers at the top of the Scottish Premiership; goals from Tom Rogic, David Turnbull and substitute Liam Scales - his first for the club - see the visitors to a comfortable win 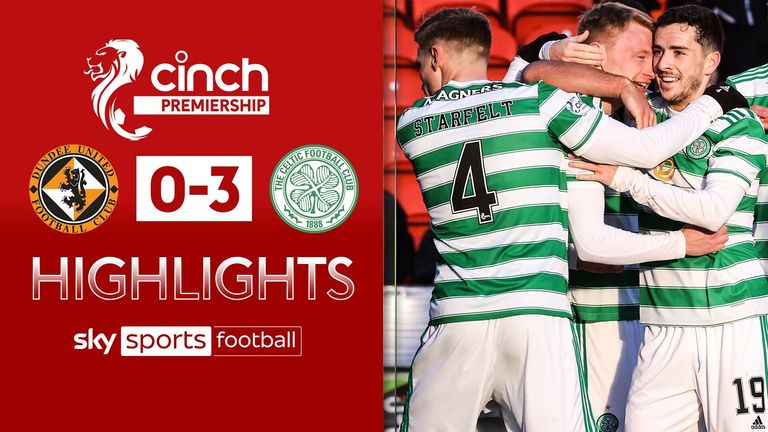 Highlights of the Scottish Premiership match between Dundee United and Celtic

Liam Scales' first Celtic goal helped his side stroll to a 3-0 win at Dundee United to move back within four points of Rangers at the top of the Scottish Premiership.

Tom Rogic opened the scoring for the visitors with a brilliant, mesmeric solo goal, before David Turnbull's clever finish doubled their advantage five minutes before half-time.

However, it was Scales - only just on as a substitute - who grabbed the headlines after adding a third with nine minutes to go as Ange Postecoglou's team kept the pressure on the champions, while United stay fourth in the table after a poor recent run of just one win in seven.

Man of the match: Tom Rogic

How Celtic maintained pressure on Rangers

With arch-rivals Rangers winning on Saturday, Celtic knew nothing less than three points would do at Tannadice Park and that is exactly what they managed after a dominant display as the visitors made it eight wins in their last nine league outings. 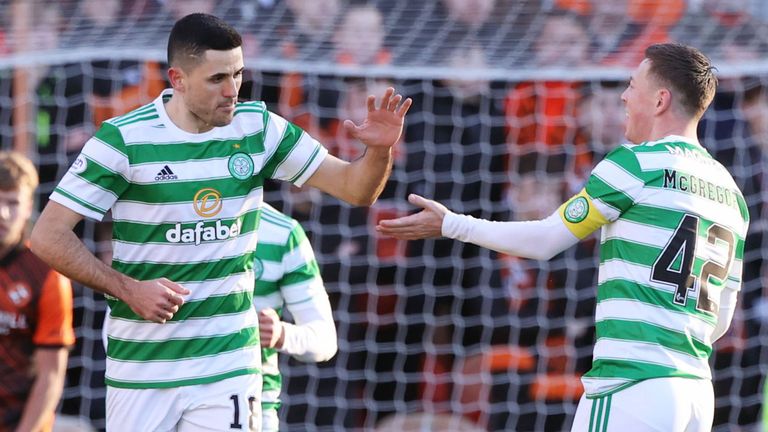 The impressive Rogic put Celtic on their way to victory with one of the goals of the season as the Australian picked up possession midway inside the hosts' half, before showing great feet to evade a trio of United players and then bending a beauty into the left-hand corner of the goal. Turnbull makes it two for Celtic

Midfielder Calum Butcher was back for Dundee United after serving a two-game ban, but had to settle for place on the bench, while Jeando Fuchs returned to the lineup having recovered from injury.

As for Celtic, central defender Cameron Carter-Vickers started having sat out Thursday's 1-0 home win over Hearts due to personal reasons.

However, the likes of right-back Anthony Ralston, centre-back Stephen Welsh and forward Jota all missed out after going off injured in that game.

That 19th-minute strike could, and should, have been added to long before Celtic did finally score a second just before half-time with a well-worked goal involving captain Callum McGregor, whose lofted pass picked out Turnbull's run in the box - the midfielder doing the rest by lobbing the advancing Benjamin Siegrist and then walking the ball over the line. The home side never had a sniff really against the top flight's meanest defence and their task would have been made even harder had referee Don Robertson shown United substitute Calum Butcher a straight red - rather than a yellow - for a two-footed lunge on Turnbull on the hour-mark.

Luckily for Celtic there was no lasting damage to their Scotland international and it was smiles all round come the full-time whistle after Scales, who had only been on the pitch for six minutes of his league debut, rounded off another flowing move with a composed finish to score his first goal for the club.

Dundee Utd boss Tam Courts: "You can see they are a very slick outfit, they have got a strong squad and a lot of top performers, and we probably allowed them to get too much control and too much rhythm in the early part of the game.

"That was partly because they are very good players and partly because we just couldn't get our distances right to get any real control in the game, or at least make some physical contact.

"We're just in a little moment just now where we have been very reliant on the same players to perform and perform admirably for us. We're just in a moment where the squad is a bit stretched.

"We're just having one of those tricky periods in a season but we're calm, we're focused, we know where we need to get to. It's more about giving Celtic credit than actually looking at any failings we've got." 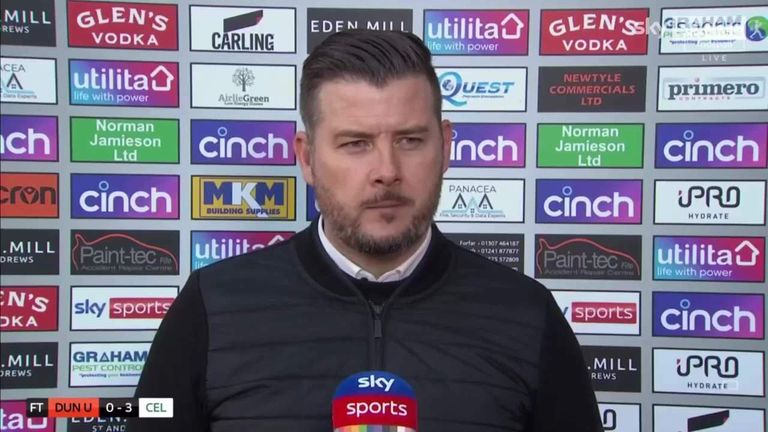 Celtic boss Ange Postecoglou: "He's [Rogic] just one of those players. When he gets the ball, put down your phones, stop eating and drinking, just watch - because something will happen.

"And it's not just his technique. He's a strong player, hard to knock off the ball. United have a strong team in the middle of the park, they're physical and they shut teams down - and it's not an easy pitch.

"But I've always enjoyed coaching Tommy. I had him for a number of years with the national team.

"Even as a manager, I get excited when he's out there playing his football.

"Tommy is one of those guys I take great pride in working with and seeing him develop." 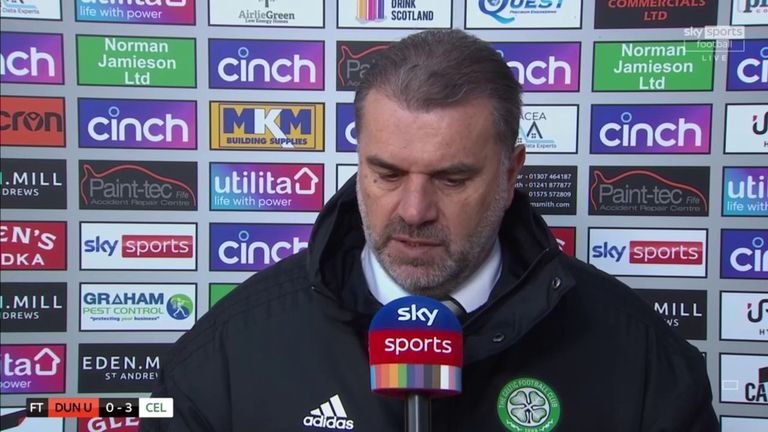 Man of the Match - Tom Rogic

Rogic's manager called him a player who gets people out of bars and after this scintillating display at Tannadice, you can see exactly why.

The Australia international's all-round performance earned him the deserved man-of-the-match award, but it will be the 28-year-old's first-half opener that most people will be talking about after the game.

Picking the ball up midway inside the home team's half, the midfielder showed great strength initially to hold off a trio of United players, before then demonstrating world-class technique to find the bottom corner with a delightful curler. 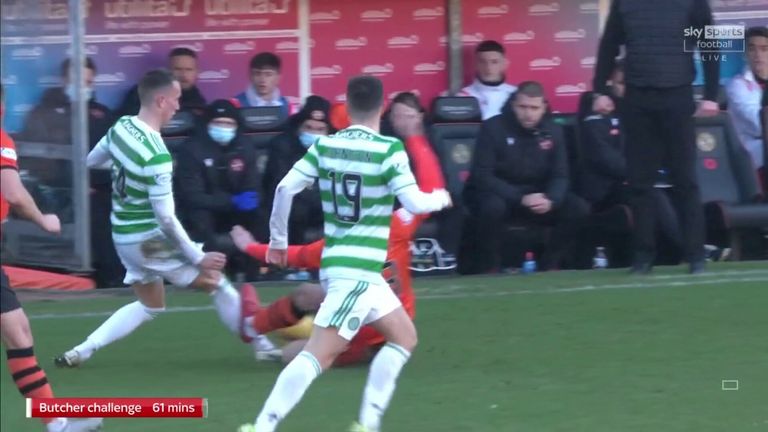 Kris Boyd has called for VAR to be introduced into Scottish football after seeing Calum Butcher’s tackle on David Turnbull only punished with a yellow card.

"It is a red card all day, there is no doubt about it. You can see the challenge is high and at speed, he is endangering the safety of an opponent.

"Turnbull is lucky to get away with this one, and the sooner we get VAR in Scottish football, the better because that is a red card and Turnbull is very lucky he has not got a really sore one there."