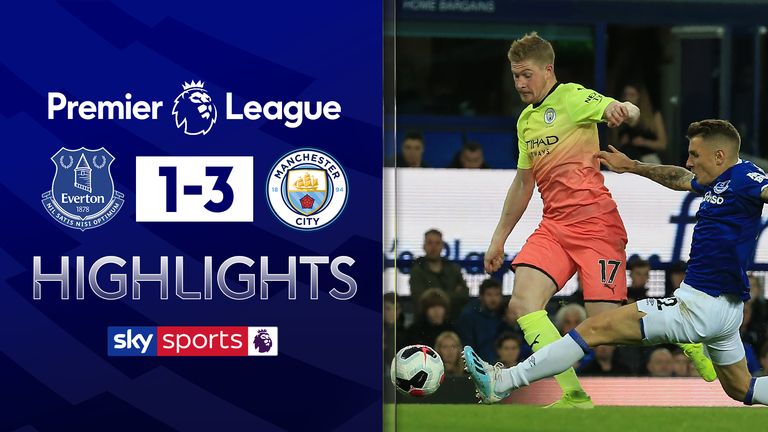 City looked slick early on and took the lead through Gabriel Jesus' diving header from yet another fine Kevin De Bruyne delivery (24), but Everton levelled as Seamus Coleman found just enough space in the box to dink over Ederson at an angle, and Dominic Calvert-Lewin got the final touch on the line (32).

Everton caused City's defence plenty of problems either side of the break, but Riyad Mahrez punished them for briefly sitting back, curling a free-kick from the edge of the box (71) under the grasp of Jordan Pickford.

And Raheem Sterling wrapped up the points with a left-footed volley at the far post in off the bar (85), meaning City remain second, five points off leaders Liverpool. Everton are 15th after three straight defeats.

City made four changes from the 8-0 win over Watford, most notably Jesus in for Aguero. Elsewhere Zinchenko, Gundogan and Sterling came in for Mendy, David Silva and Bernardo Silva.

Everton made two changes as Calvert-Lewin and Walcott came in for Bernard and Kean.

There was concern in the first minute as Sterling's cross struck Theo Walcott in the face, leading to a lengthy stoppage and the Everton forward having to be carried off on a stretcher on just his first Premier League start of the season. Everton confirmed Walcott had been taken straight to hospital for a precautionary assessment.

City's Ilkay Gundogan missed an open-goal sitter from a few yards out after Mahrez's centre, while at the other end Gylfi Sigurdsson saw a low effort blocked from 12 yards after a nice Everton move.

But the champions' opener came from a familiar delivery. After fine work from Mahrez on the right, the Algerian offloaded to De Bruyne, whose sweeping cross found Jesus at the back post. The Brazilian muscled in ahead of Michael Keane to head home, giving De Bruyne his eighth assist of the season already.

Man of the match: Riyad Mahrez

But Everton levelled eight minutes later as early sub Alex Iwobi squeezed the ball through to Coleman at an angle, and the right-back did well to lift it over Ederson as Calvert-Lewin made sure with a header on the line.

Yerry Mina tested Ederson after the break with a header from a free-kick as City gave away numerous silly fouls, before Sterling missed a sitter by his recent high standards, side-footing wide of the post after Mahrez's superb through ball had found him one-on-one with Pickford.

With 25 minutes remaining, Everton retreated. They invited City on and were punished when Mahrez curled home a low free-kick from just outside the box to the right, though there were question marks of Pickford as the ball went under his outstretched hand.

Calvert-Lewin nearly levelled again moments later, having been slipped through by Sigurdsson, but Ederson rushed out to block him well, and Ederson again came to City's rescue with a fine diving save from Mina's header, before Calvert-Lewin deflected the rebound wide.

But City searched for a third and Sterling made sure of the points late on, lurking at the far post to volley home left-footed after sub Sergio Aguero had forced a save from Pickford at an angle.

City fans celebrated in both jubilation and relief, knowing they could have slipped at least seven points behind a perfect Liverpool side, with their defensive frailties evident at Goodison Park.

Everton boss Marco Silva: "We didn't start the game very strong, maybe in the first 20 minutes we respected them, but after the goal we reacted, showed desire to challenge them, and played to win, but they were more clinical than us. 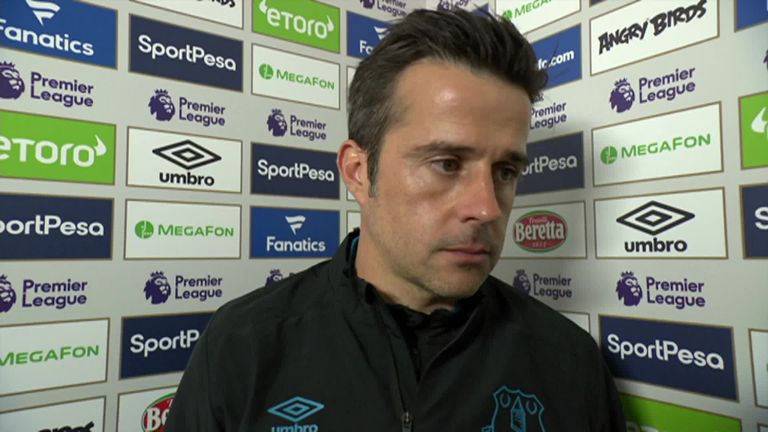 Manchester City boss Pep Guardiola: "It was a tough game. We saw Liverpool had won, so it was a lot of pressure, eight points would have been difficult in September. It's incredible to come here, every season it is difficult, and we make an incredible result. With the ball we were outstanding.

"From September we have to live this situation. Liverpool are on an incredible won, seven wins. It is not easy." 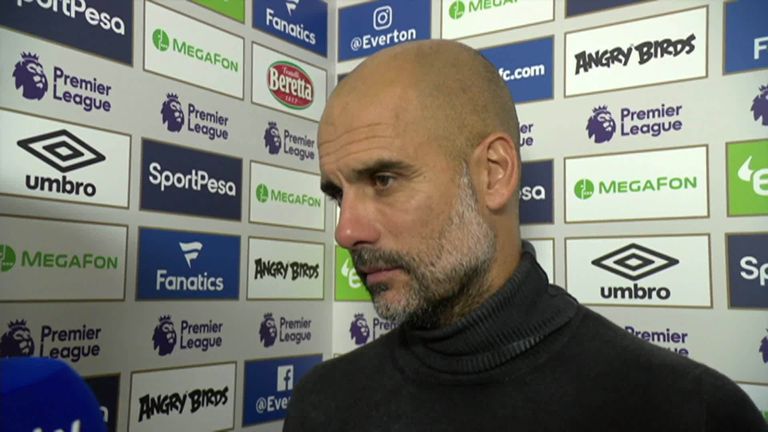