Wilson, who had missed Newcastle's two best chances either side of half-time, scored his 50th Premier League goal with a fabulous, inch-perfect header from Jonjo Shelvey's corner (73), a deserved opener for Bruce's side.

Wilson got his and Newcastle's second in stoppage time, finishing low past Jordan Pickford when one-on-one as Everton were caught high up the pitch looking for a leveller (90+3).

There have been strong calls for Bruce's sacking among Newcastle fans of late, but this was a rare positive performance and lifts Newcastle eight points clear of the drop zone, albeit having played one more game than 18th-placed Fulham.

Everton lacked creativity and missed the chance to move fifth; they sit seventh, four points off the top four but with a game in hand.

Man of the match: Callum Wilson

Bruce had new assistant coach Graeme Jones alongside him in the dugout for the first time, and in 90 minutes Newcastle showed more guts, energy and creativity than in many of their games combined this season.

The first half was goalless but open, with Newcastle visibly pressing high and getting more success than in recent weeks.

Shelvey went close with a deflected effort just wide, and the best chance of the opening 45 minutes fell to Wilson, whose header from Ryan Fraser's corner forced a brilliant stop from Pickford from point-blank range.

Everton had their moments - Richarlison and James Rodriguez forced Karl Darlow into low blocks, while Richarlison also floated an effort inches wide, but the hosts struggled to get the ball into Dominic Calvert-Lewin, who failed to muster an attempt on goal until early in the second half.

Wilson had another chance to put Newcastle ahead after the break, receiving the ball with just Pickford to beat 12 yards out from Fraser's centre, but he swept the ball just wide of the far post.

Darlow then tipped away Calvert-Lewin's curling effort, but Carlo Ancelotti's side otherwise looked short of creativity as Newcastle worked hard to shut down avenues - four of the five top runners in the game were from visiting players.

And Newcastle got their deserved opener with a brilliant striker's finish from Wilson. Shelvey's drilled corner met Wilson 10 yards out, and having peeled off Richarlison, the striker had to create the power and direct a fantastic header into the far corner, only Newcastle's third goal in 10 games in all competitions.

Everton huffed and puffed for a leveller, but Newcastle had the better chance to score again, as Wilson hit the post having rounded Pickford at an angle.

Despite speculation that he may be dropped, Jordan Pickford kept his place in Everton's starting XI.

Carlo Ancelotti did make four changes from the side that drew 1-1 with Leicester in midweek, however; Holgate, Godfrey, Gomes and Davies all dropped to the bench, with Coleman, Sigurdsson, Doucoure and Iwobi coming in. Everton could name only eight subs, including two goalkeepers in Olsen and Virginia.

Newcastle made just one change from the 2-1 defeat by Leeds on Tuesday; Murphy as out, replaced by Manquillo.

Then in stoppage time, as Everton left numbers high to chase an equaliser, sub Allan Saint-Maximin sent Jamal Lewis flying down the left, and his square ball found Wilson, who duly slotted beyond Pickford for 2-0 for his 10th of the season.

Newcastle fans had been begging for more signs of bold attacking football in recent weeks, and they got it in abundance at Goodison Park to at least slow down the talk Bruce's future at St James' Park.

Everton boss Carlo Ancelotti on Richarlison: "We were lazy, we were slow and we were not focused. We gave away 12 corners to them, a lot of throw-ins. We didn't win duels, second balls... this is the game.

"You can only show quality if you are there in this game because the game is about winning duels, second balls, avoiding corners, avoiding throw-ins. We were not on the pitch today." 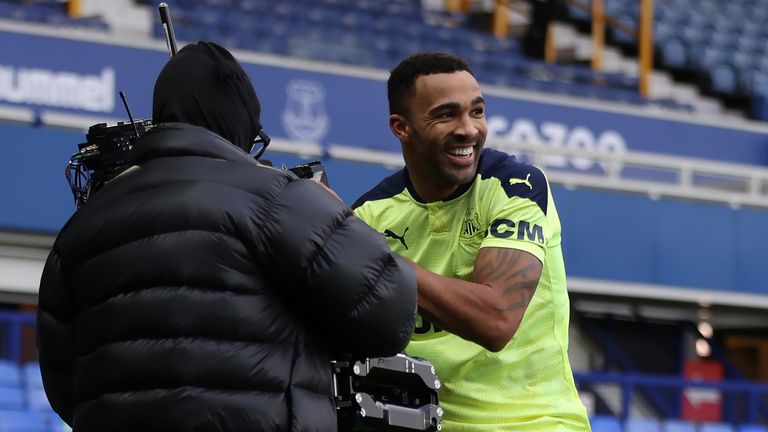 Steve Bruce praised his Newcastle side for providing the service for Callum Wilson to score twice in their 2-0 win at Everton.

"[The tactical change] is something we've been working on for weeks. If you looked at Newcastle in the past year it was sitting deep and hitting on the counter attack.

"I think the players have enjoyed the change, but you need a result to go with it. Today, of course, everyone is happy. I haven't turned it around now, just on one performance. I hope in time if we stay fit and healthy we'll be OK."

Everton now go to Leeds on Wednesday in the Premier League at 7.30pm, before going to Manchester United on Saturday at 8pm, live on Sky Sports Premier League.

Newcastle host Crystal Palace on Tuesday evening at 8.15pm, before hosting Southampton on Saturday at 3pm.