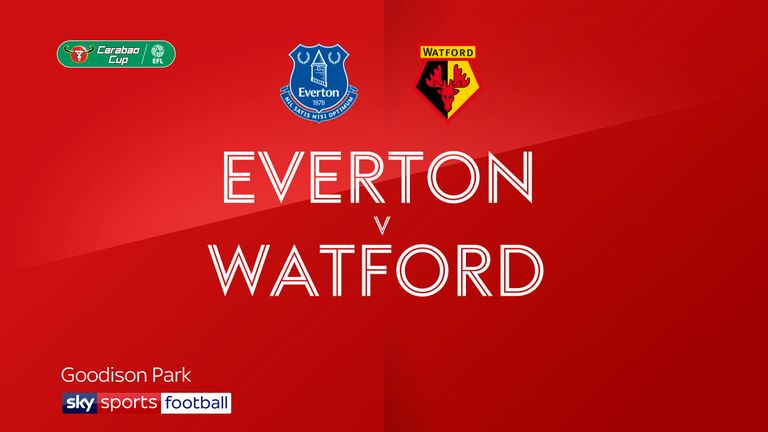 Highlights of the Carabao Cup match between Everton and Watford

Everton advanced into the quarter-finals of the Carabao Cup as goals from Mason Holgate and Richarlison secured a 2-0 victory over Watford at Goodison Park.

Holgate headed home his first goal for the Toffees in the 72nd minute, before ex-Hornets forward Richarlison secured the win when he fired past Heurelho Gomes in stoppage time.

After a first half low on entertainment, the Merseysiders went close three times before breaking the deadlock, with Andre Gomes having a shot cleared off the line and efforts from Alex Iwobi and Lucas Digne hitting the woodwork.

In the sixth minute, a break by the hosts ended with Moise Kean, one of those brought into the side, having a shot blocked by Craig Cathcart.

Everton were soon bursting forward again, but Richarlison messed up his attempt to pick out a team-mate, and Domingos Quina then skewed wide at the other end.

There was good work just after the half-hour mark from Yerry Mina as the defender took the ball away from Nathaniel Chalobah in the box and blocked a shot from Dimitri Foulquier.

Mina was subsequently taken off for Michael Keane having gone down in discomfort, shortly after Watford had made a substitution themselves due to injury, Quina being replaced by Abdoulaye Doucoure.

Iwobi then struck an effort, following a mistake by Chalobah, that was comfortably caught by Gomes as a lacklustre first half neared its conclusion.

Silva brought Theo Walcott on for Kean at the break and the substitute almost combined with Iwobi in the opening moments of the second half, but was beaten to the ball by Gomes.

Richarlison sent a curling effort off target, before a fierce Andre Gray shot brought a decent save out of Jordan Pickford.

Keane saw his bouncing header dealt with by Gomes in the 61st minute, and Andre Gomes then saw his shot go past the goalkeeper, only for Adrian Mariappa to clear off the line.

Soon after Silva's men hit the woodwork twice in quick succession, Iwobi's strike hitting the corner of the goalframe and Digne's free-kick then deflecting against the bar.

Richarlison wrapped things up at the end as he burst into the box and cracked an emphatic effort beyond Gomes.

Both teams are back on Sky Sports this weekend, with Watford hosting Chelsea on Saturday Night Football from 5pm; Kick-off at 5.30pm. Everton are at home to Tottenham on Super Sunday from 4pm; Kick-off at 4.30pm.