Fulham 0-0 Brighton: Hosts move out of drop zone thanks to VAR spot 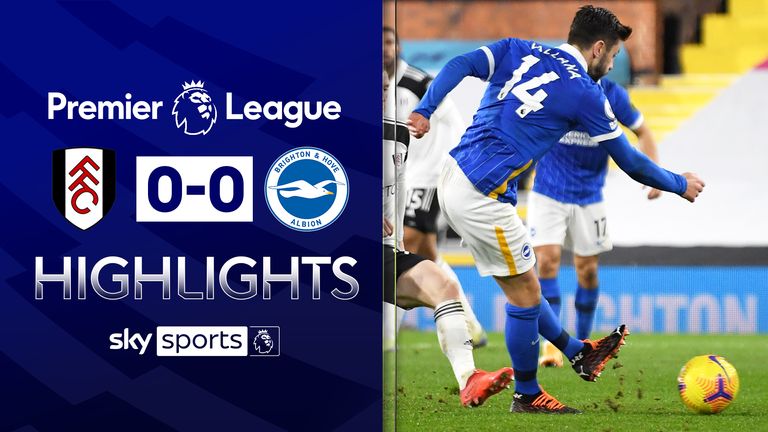 FREE TO WATCH: Highlights from Fulham’s draw with Brighton in the Premier League.

VAR and the crossbar came to Fulham's rescue as they moved out of the drop zone after a goalless draw with Brighton at Craven Cottage.

Danny Welbeck's airshot from eight yards out with most of the goal to aim at was the best chance in a first half lacking in goalmouth action, before Adam Lallana's strike minutes into the second period was ruled out by VAR for a handball by Welbeck in the build-up.

Adam Webster's thundering header hit the crossbar shortly after, while at the other end, Robert Sanchez denied both Ruben Loftus-Cheek and Ademola Lookman on only his second Premier League appearance.

The result means Fulham missed the chance to leapfrog Brighton, but Scott Parker's side move out of the drop zone for 24 hours at least on goal difference above Burnley. Brighton are two points and one place ahead in 16th.

This was Fulham's first goalless home league draw since August 2011 against Aston Villa, ending a run of 196 consecutive home league games with at least one goal scored. Meanwhile, Brighton have won just one of their last 11 Premier League matches.

Man of the match: Joachim Andersen

How VAR denied Brighton at the Cottage

With London entering Tier 3 on Wednesday, Fulham missed the vocal support of the 2,000 fans who saw them draw 1-1 with champions Liverpool on Sunday, and the majority of the first-half was as listless as they come.

There were just four touches in the opposition area in the opening half an hour - two for each team - and the best chance fell to Brighton's Welbeck, who somehow made no connection with the ball with the goal gaping from Tariq Lamptey's centre.

The game briefly opened up before the break as Ivan Cavaleiro stung the hands of Sanchez, before Tosin Adarabioyo headed over having risen well from the resulting Cavaleiro corner.

The second-half livened up considerably as Alphonse Areola made a double save from Lewis Dunk, first denying his header from a Solly March corner, before getting up to hold onto Dunk's rebound as the defender lay on the ground and swiped at the ball.

Brighton then thought they'd taken the lead as March's centre from the left found Welbeck, who miscontrolled, but the ball kindly dropped into the path of Lallana to tuck into the bottom right corner. But VAR looked at it, and spotted a handball by Welbeck in the build-up.

VAR was involved again moments later as Welbeck came piling into Ademola Lookman in the Brighton box, but Andrew Madley at Stockley Park saw that Webster had in fact won the ball.

Brighton upped the ante and came within inches of a fair opener, but Webster's powerful header from a corner came off the underside of the bar, off the line and clear.

Fulham made just one change following their 1-1 draw with Liverpool, as Harrison Reed came in for Mario Lemina. Aleksandar Mitrovic was back, but didn't make the starting XI.

For Brighton there was no less than six changes from the side that were beaten 3-0 at Leicester; Ryan, Veltman, Burn, Gross, Maupay and Jahanbakhsh came out, replaced by goalkeeper Robert Sanchez, making only his second Premier League appearance, plus Lamptey, Alzate, Trossard, Lallana and Webster.

A win for either side would have put some daylight between themselves and the drop zone, but neither side overcommitted on a night where the defences took over.

Fulham boss Scott Parker: "I felt tonight we lacked a little something, we looked a little bit jaded and I recognise that we need to play better with the ball. It's a massive positive, because I think it's been well-documented and everyone's seen that there have been times we weren't able to do that.

"Maybe [lack of fans] could have [had an impact], I think the atmosphere generated on Sunday was incredible and tonight it was that sterile, dead stadium that we've all become accustomed to."

Brighton boss Graham Potter on why Robert Sanchez started ahead of Mat Ryan, who failed to make the bench: "I made the decision to go with Rob, he's got some incredible attributes, and huge potential, and Jason Steele has been doing well as the No 2, so that was the decision for the game.

"He earned his place on merit in terms of how he's trained and worked, and I thought his performance was good tonight. He's quite relaxed, quite laidback, ambitious, confident, a young man that wants to do well.

"I think Matty has been a fantastic servant for us, he's a top pro and a top guy, what he's done for this club and me is amazing. Sometimes in a season you think you might just need a change of dynamic, and Sanchez has attributes that are difficult to find.

"As you'd imagine he's disappointed because he wants to play and be a part of what we're doing here, but he took it and was very professional as you'd expect from a top guy."