Match report and highlights as Karl Toko Ekambi double ends Gambia's valiant Africa Cup of Nations run in the quarter-finals and sends hosts Cameroon into last four, where they will face either Egypt or Morocco 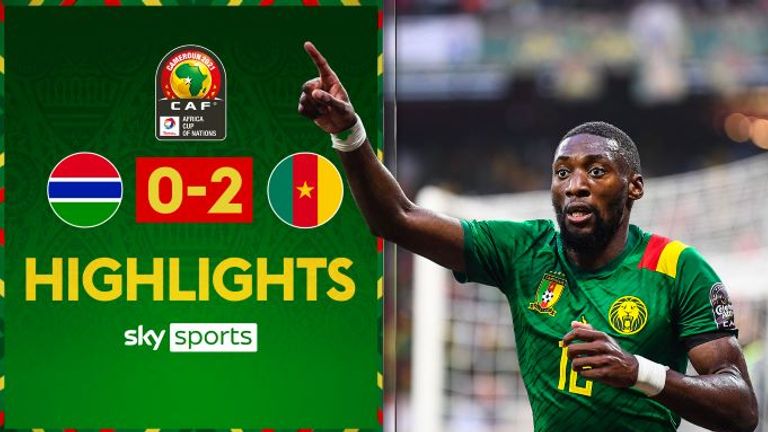 Karl Toko Ekambi scored twice as hosts Cameroon booked a place in the Africa Cup of Nations semi-finals with a 2-0 quarter-final win over lowly-ranked Gambia.

Cameroon's winning goals came in a seven-minute burst in the second half as the hosts finally converted their superiority into goals in front of an ecstatic crowd at the Japoma Stadium.

Toko Ekambi got his first with a 50th-minute header and then, in the 57th minute, snuck in behind the Gambian defence to tap home a square pass for the second.

Security was increased at the Japoma Stadium in Douala following the deadly crush that left eight fans dead at Cameroon's last game.

Cameroon authorities said they had placed 250 extra police officers at the Japoma Stadium, while yellow-vested security officials formed a line between the crowd and the field during the game.

That incident at the Olembe Stadium in Yaounde is the subject of an investigation by officials, which could yet see the venue removed as host of the Africa Cup of Nations final on February 6.

Cameroon are still on course to make that final - wherever it is held - after dominating against Gambia, who were playing in their first Africa Cup and caused a major surprise to make it to the quarter-finals.

Cameroon will meet the winner of Sunday's quarter-final between Mohamed Salah's Egypt and Morocco.