Hearts 0-0 Hibs: All square in Edinburgh derby at Tynecastle

Match report as the first Edinburgh derby of the Scottish Premiership season ends goalless at Tynecastle; as a result, Hibs and Hearts stay in second and third places respectively in the table, just a point behind champions Rangers 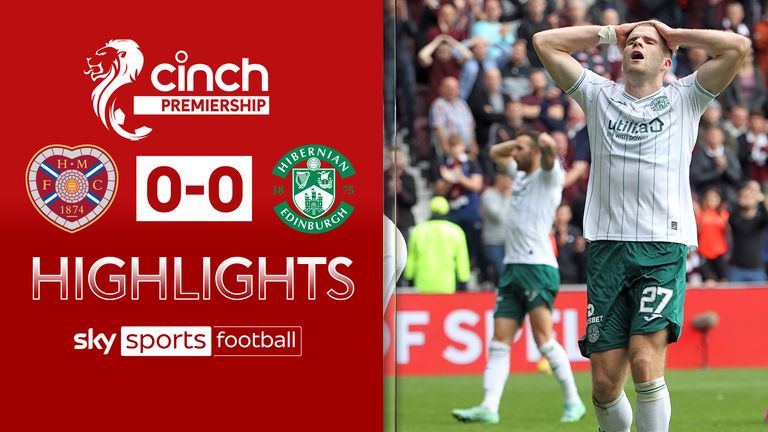 Highlights of the Scottish Premiership match between Hearts and Hibernian.

Hearts and Hibs both missed out on the chance to go top of the Scottish Premiership after playing out a goalless draw at Tynecastle in the first Edinburgh derby of the season.

The clash between the two fierce city rivals - played in front of fans for the first time since March 2020 - ended up being a contest between the two opposing goalkeepers.

Hibs 'keeper Matt Macey was in inspired form, twice denying Gary Mackay-Steven with two breath-taking stops just past the hour-mark, before his opposite number - Craig Gordon - produced an equally stunning save to prevent Kevin Nisbet from opening the scoring with 13 minutes to go.

As a result, Hibs and Hearts stay in second and third places respectively in the table, just a point behind champions Rangers.

How Edinburgh derby ended in stalemate

Hearts made one change to the side that started the 2-0 win at Dundee United a fortnight ago, with the fit-again Stephen Kingsley starting in defence and Andy Halliday dropping to the bench. New signing Barrie McKay was also among the substitutes.

There were three changes for Hibs as Jake Doyle-Hayes missed out through illness and Jamie Murphy was absent due to injury, while Darren McGregor dropped to the bench.

Joe Newell, Paul Hanlon and Chris Cadden all went straight into the starting line-up after their recent injury lay-offs.

Hearts had the first attempt on goal in the 15th minute when Ben Woodburn rasped a 20-yard strike just over the crossbar.

The visitors struggled to get a proper sight of goal in the early stages although there was a momentary scare for the hosts in the 19th minute when Newell's cross from the left dropped onto the top of the crossbar.

At the other end, Liam Boyce headed over from a Kingsley cross.

Hearts were starting to crank up the pressure and in the 25th minute, Mackay-Steven saw a ferocious strike from 25 yards out beaten away by Macey. Kingsley and John Souttar then both went close from successive Hearts corners.

Home goalkeeper Gordon made his first save of the match 10 minutes before the break when he got a firm wrist behind a powerful Martin Boyle strike from outside the box.

The Australia international forced the Scotland stopper into another vital block with a low-angled shot from the edge of the box at the end of the first half.

With Hearts having generally been the more authoritative side before the break, Hibs manager Jack Ross sent on midfield enforcer Alex Gogic in place of James Scott for the start of the second half in an attempt to get his side back in the game.

The visitors had a good chance just before the hour when Kyle Magennis seized on a loose pass from Souttar but the midfielder's shot from 15 yards out was too tame to trouble Gordon.

Mackay-Steven then went close twice in quick succession for Hearts, with the winger denied by big saves from Macey on both occasions.

The Hibs goalkeeper made another important block in the 73rd minute to keep out Josh Ginnelly's header after he was picked out at the back post by a cross from fellow substitute McKay.

At the other end, Gogic fizzed a powerful strike inches wide before Magennis was denied by stunning save from Gordon after being teed up by Nisbet after 77 minutes. Nisbet then volleyed the ball just over from inside the box.

Hearts almost won it at the death but the excellent Macey prevented Hanlon from turning Alex Cochrane's cross into his own net. Hearts boss Robbie Neilson felt that his team deserved a victory against Hibernian in the Edinburgh derby after it finished goalless.

Hearts boss Robbie Neilson: "It was a really good game, I actually enjoyed it.

"Sometimes as a manager you don't because of the things that happen in it but I think everyone would agree that was an entertaining game.

"There's a tinge of disappointment that we didn't get the three points because I thought we created some really good chances but - at the same time - Craig Gordon made a few good saves as well.

"There were some great saves from both goalkeepers and I think that's one of the main reasons both teams are joint second, because we've got great goalies.

"Craig is an exceptional goalie and I thought Macey put on a great performance." 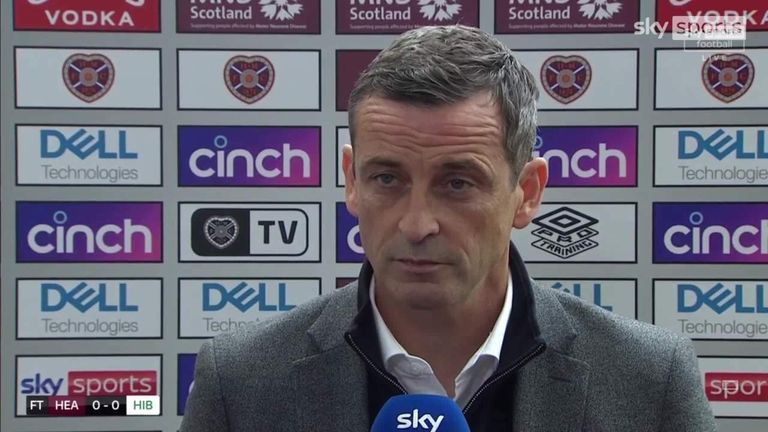 Jack Ross praised the entertaining 0-0 draw between Hearts and Hibernian as his Hibs side continued their unbeaten start in the Scottish Premiership.

Hibs boss Jack Ross: "The goalkeepers will grab the headlines - and rightly so for the quality of their saves.

"Matt has really grown into being an established number one. His performances and the results we've achieved with him in the team have been outstanding, even going back to the cup games last season.

"He played a big part in us taking something from the game.

"And Craig Gordon has done that countless times against other teams. Some of the saves from both of them were outstanding."

Hearts travel to Ross County, while Hibs host St Mirren, with both Scottish Premiership games kicking off at 3pm on Saturday.