Match report as Dundee United move into third spot in the Scottish Premiership with 3-0 win at Easter Road; Hibs slip into fifth behind Celtic 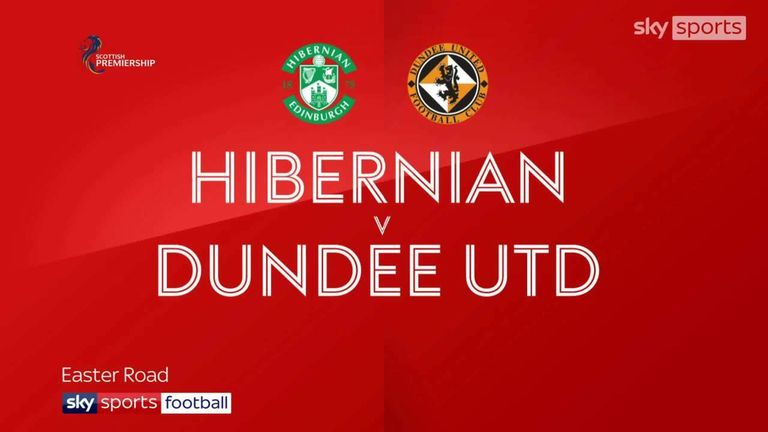 Highlights of the Scottish Premiership clash between Hibernian and Dundee United.

Dundee United moved into third in the Scottish Premiership with a stunning 3-0 victory over Hibernian at Easter Road.

Nicky Clark drilled in the opener just moments before the interval to put the Tangerines firmly in the driving seat.

And second-half strikes from Ryan Edwards and Kieran Freeman sealed a thoroughly-deserved win for the Tannadice side.

There was little to shout about in the opening exchanges as Hibs struggled to find their rhythm in attack and United defended stoutly. The visitors were slicker in possession and were first to every loose ball.

Midway through the half, United carved out the first opportunity of the match as they worked an opening on the left side of the box.

Ilmari Niskanen flashed in a shot that looked to be heading wide, but Matt Macey in the Hibs goal made certain with a fingertip save.

Martin Boyle suddenly burst into life for the home side shortly after but was cynically hauled down by Edwards, who earned the game's first booking.

There was little to enthuse Hibs manager Jack Ross or the club's supporters as they continued to struggle for a way past United's well-drilled defence.

By contrast, United would have been thrilled with their first-half showing.

Clark speared in a shot that flew narrowly over the bar in the 32nd minute and they finally found the opener their efforts deserved in the 44th minute.

Hibs had just enjoyed a spell of meaningful possession around the visitors' box but were caught out at the other end.

United appeared to be going nowhere with an attack on the left but Clark took responsibility and fired a superb shot into the bottom corner from 20 yards out.

Hibs responded with a change of shape at half-time, withdrawing Scott Allan in favour of striker James Scott.

But it was United who snatched the all-important second goal just seven minutes into the second half. A corner from the left was recycled and Edwards bulleted in his header from Scott McMann's superb cross.

Edwards was in the right place at the right time again just moments later when he deflected Jamie Murphy's shot over his own bar.

Hibs' hopes of a late comeback disappeared when United added a third in the 74th minute. They sliced through the home defence with a slick passing move that culminated with Freeman arriving unmarked to slot in from 10 yards out.

Kevin Nisbet was denied a late consolation when Benjamin Siegrist tipped his shot onto a post as United held on comfortably.

Dundee United boss Tam Courts: "The longer we work together, the better an understanding that the players have got of what is expected of them from a shape and formation perspective.

"The boys are giving it absolutely everything for each other so it's nice to see them getting a reward.

"I don't really pay attention to the league table because what we are trying to do is be mindful of our own targets. So the weekly league position is not really what we are paying attention to.

"I think the fans are enjoying first and foremost the players being committed to each other and giving absolutely everything, regardless of whether they are playing against teams at the top or bottom.

"Their efforts and energy levels are through the roof every game and that's the minimum that the fans expect. And the fans are responding to the effort and it's good to send them away happy. There's a good connection there."

Hibs boss Jack Ross: "It was the worst version of ourselves. We strive a lot to be the best version but today we were lazy, slow and selfish in our play. When you do that you produce that type of performance and subsequently the result.

"Don't dramatise it. Lazy is an expression to say they haven't worked hard enough, and I've told them that. I'm just giving an answer to the question because they didn't work hard enough in all aspects of their play.

"Why? That's the question I'll have to find the answer to over the course of the week. It was just way below the standards we've been at and have been fairly consistently."

Hibs face a trip to Aberdeen next Saturday before a midweek clash with Celtic on home soil on October 27.