Report and highlights from the Sky Bet Championship clash between Huddersfield and Reading at the John Smith's Stadium as Lewis O'Brien, Matthew Pearson, Sorba Thomas and Danny Ward strike for the Terriers. 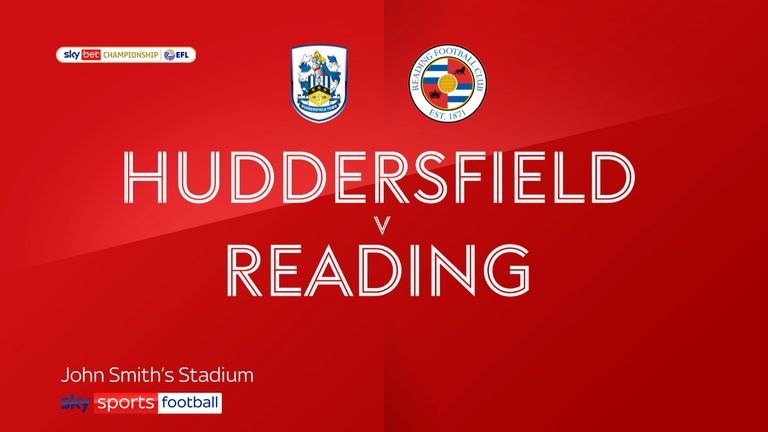 Highlights of the Sky Bet Championship match between Huddersfield and Reading.

Sorba Thomas was the inspiration, scoring his first for the club and setting up goals for Lewis O'Brien and Matty Pearson, with Danny Ward also on target on a miserable afternoon for the Royals.

It is the first time since the Terriers' promotion to the Premier League in 2017 that they have won three consecutive league games, with the result leaving Reading floundering with the Championship's worst defence at the wrong end of the table.

Town dominated throughout, with Josh Koroma causing problems early on. He twice fired straight at goalkeeper Rafael in the opening 10 minutes.

Huddersfield thought they were ahead midway through the half. Royals left-back Andy Yiadom was booked for a foul on Thomas just outside the box, and Danel Sinani fired a thunderous left-footed free-kick back off the post which half the stadium thought had gone in.

A weak Junior Hoilett shot was all the visitors could muster before Town took the lead.

Midfielder O'Brien, who has been heavily linked with Leeds this summer, slotted the ball home five minutes before the break after terrific work from Thomas.

He chipped and chased over the Reading defence and, when the Royals failed to clear his bobbling cross, O'Brien was there to slot it home.

The Terriers almost doubled their lead at the start of the second half, as the lively Sinani burst clear but Rafael was off his line swiftly to smother his effort.

Six minutes after the break, the hosts made it 2-0 after a Town free-kick on the left was whipped in wonderfully from the right foot of Thomas and Pearson had the simplest of tasks to poke the ball home from close range.

The unplayable Thomas made it 3-0 with a fine solo goal, picking up the ball just inside his own half and tormenting the Reading defence before finding the bottom corner.

And - straight from the restart - Huddersfield tore through again, Koroma scampering clear down the left and picking out Ward, who had the composure to round Rafael and tap in.

With the Town fans finding their voice on a sun-drenched West Yorkshire afternoon, it became damage-limitation for Reading who were relieved to see no further addition to the score before the referee ended their misery.

Huddersfield's Carlos Corberan: "I am happy because the team played good football, was very serious and competed very well. We had good moments of football in attack and defence and you start to enjoy that with the positive collective performance.

"Sorba Thomas is a player that helps the team a lot. He needs more minutes and is using those minutes well. The whole team played well, they were solid in defence, had good pressing, managing the ball, creating chances - I like to see the team play with personality and maturity."

Reading's Veljko Paunovic: "I think it is a game to forget as soon as possible. We can't ignore how we feel but we have to use this defeat as a catalyst to bring back the spirit and the mojo we have lost so far. I also think we have to acknowledge the team is incomplete and has been for the whole of pre-season. I think there are two reasons why the team is incomplete.

"We lost certain players and didn't replace them and secondly it is the injuries and those are difficult to replace because they are our players. This is nothing new, it is just a fact in football and I also want to take full accountability and responsibility for our team for not putting on a performance and not being at our best."