Report and free highlights as Richarlison and Mason Holgate score to send Everton fifth and stop Leicester City from topping the Premier League; Allan forced off before half-time with serious-looking hamstring injury 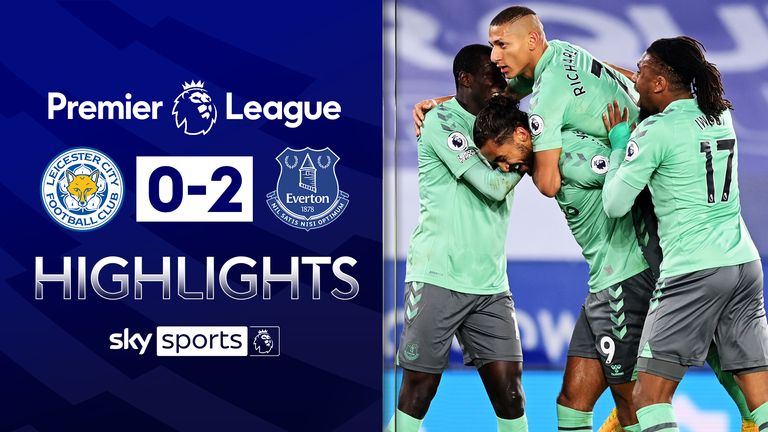 FREE TO WATCH: Highlights from Everton’s win at Leicester in the Premier League.

Richarlison and Mason Holgate gave Everton a resolute 2-0 victory at Leicester to stop the Foxes going top of the Premier League - while moving fifth in the table themselves.

Richarlison's hopeful effort was palmed into the corner of his net by a Kasper Schmeichel mistake midway through the opening half, moments before Jamie Vardy should have levelled for the hosts with a free header from six yards.

Leicester struggled to test restored Everton goalkeeper Robin Olsen besides and fell further behind when Mason Holgate turned in just the fourth goal of his senior career on the rebound from a Gylfi Sigurdsson corner with 18 minutes to go.

The Foxes thought they had a route back into the game when Lee Mason awarded a penalty for Andre Gomes' challenge on Ayoze Perez, but after reviewing the VAR monitor overturned his own decision when he ruled the Portuguese midfielder had got something on the ball.

The result, Everton's second win against a top-six side in five days, lifts them up to fifth while Leicester miss the chance to go top of the Premier League, at least until the conclusion of Liverpool vs Tottenham in Wednesday's late kick-off.

Ahead of table-topping Liverpool and Spurs going head-to-head later on Wednesday, Leicester smelled the chance to steal a march on their title rivals and began on the front foot in the early kick-off.

Youri Tielemans' drive whistled wide with less than two minutes gone but without the quality in the final third, left the restored Robin Olsen a spectator.

Schmeichel may have wished he was given the same opportunity after coming up short from Everton's first real chance of the night, palming Richarlison's effort from distance into his own corner with 20 minutes played.

Moments later Leicester should have restored parity, but Vardy directed an unusually wasteful free header straight at the goalkeeper from six yards.

Calvert-Lewin twice gave Schmeichel catching practice from crosses before Under forced a strong hold from Olsen, but in the dying minutes of the opening period Everton's lead took a sour turn when Allan was forced off with a serious-looking hamstring injury.

Leicester's response from the half-time interval offered little to give Brendan Rodgers hope the second 45 minutes might be different; before the hour mark the best they could muster were two long-range efforts from Tielemans and Under.

James Maddison fired over from similar range with Leicester failing to make the most of what little opportunities they could conjure up, before Everton clinically struck with their first meaningful chance of the half. Schmeichel made a superb double-save to keep out efforts from Yerry Mina and Calvert-Lewin from a corner, but was left powerless to deny Holgate a third bite of the cherry.

Seven minutes from time Leicester suddenly looked to have a lifeline when Gomes' challenge on Perez was ruled a penalty, but after VAR official Darren England instructed Mason to visit the review monitor, and the referee reversed his original decision.

Nothing continued to click for Leicester, including their hopes of topping the table, as resurgent Everton rose to fifth to seal a fine few days' work for Carlo Ancelotti.

Leicester have got plenty of joy in recent weeks from getting the likes of Maddison, Harvey Barnes or Dennis Praet in behind the opposition midfield but Abdoulaye Doucoure and Allan - until his departure through injury - kept them at bay superbly.

This is the box-to-box role he was brought in for, and the form which saw Doucoure linked with the likes of PSG barely a year ago.

Leicester boss Brendan Rodgers: "We're disappointed with the first goal, the first goal was going to be important and we could have been much better in that moment. In the attacking third, we arrived in the right areas but lacked the quality to break them down.

"I thought we should have had the penalty, that would have given us the last 10 minutes to push on, but we're very frustrated to have lost the game because otherwise we haven't given away a lot apart from the set-piece. Frustrating is the word.

"It was a surprise, down on the sidelines you could hear the contact and Lee Mason was right on it. He has had another look at it, and the image he is looking at on the screen isn't the one that shows Ayoze Perez got the touch and was clipped on the foot.

"Watching the Fulham-Liverpool game, the referee comes over and has a look but as soon as he makes his decision, the next image shown shows clearly it looks like a penalty for Fulham."

Everton manager Carlo Ancelotti: "We were able to repeat the same performance we did against Chelsea. Solid defensively, when we had the opportunity we scored, and then we controlled the game quite well.

"We were well-organised, and it's a very important result. First of all, there is good form from all the players, the strikers Dominic Calvert-Lewin and Gylfi Sigurdsson are working hard, the back four are working well together, we don't push the full-backs on a lot because it's difficult then to find us out of balance."

Leicester are live on Super Sunday on Sky Sports Premier League this Sunday when they visit Tottenham from 2pm; Kick-off at 2.15pm.

Everton are also back on Sky Sports this weekend when they host out-of-form Arsenal on Saturday Night Football live on Sky Sports Premier League from 5pm; Kick-off at 5.30pm.