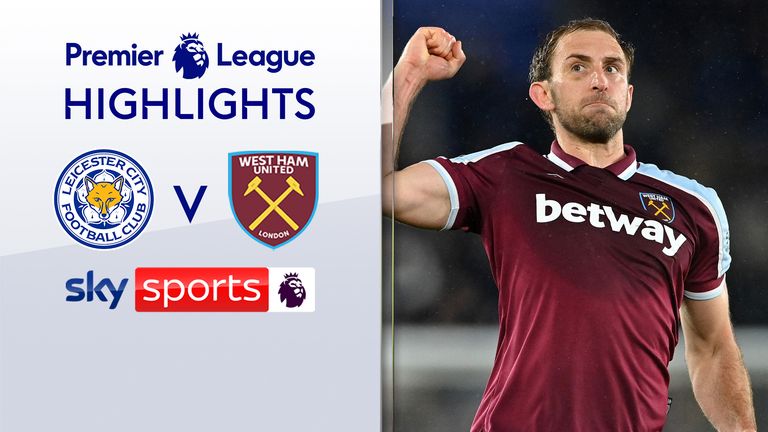 FREE TO WATCH: Highlights from Leicester's draw with West Ham in the Premier League

Craig Dawson's last-gasp goal rescued a point for West Ham as they drew 2-2 at Leicester to extend the Foxes' wait for a Premier League win.

The centre-back's equaliser in the first minute of stoppage - forced in off his shoulder - moved the visitors one point clear of Manchester United in the battle for a top-four spot.

But it was heartbreaking for Leicester, who had fought back from a goal down to take themselves within minutes of a much-needed victory - it would have been their first since December 28.

Jarrod Bowen's well-taken 10th-minute strike gave the Hammers an early lead and the Foxes looked completely bereft of any confidence, with moans and groans greeting every backwards or misplaced pass.

The visitors were comfortable until a moment of madness from Aaron Cresswell gifted the Foxes a route back into the game as he inexplicably handled a James Maddison corner.

Youri Tielemans converted confidently from the spot on the stroke of half-time and the goal changed the mood among the home supporters completely.

Man of the match: Barnes

Harvey Barnes had already got the better of Vladimir Coufal moments earlier, with his low cross just evading the onrushing Patson Daka, when he clipped in a ball from the left for Ricardo Periera to nod beyond Lukasz Fabianski and complete the turnaround for Leicester.

They looked to be seeing the game out comfortably, with Kasper Schmeichel not forced into any saves of note.

But corners have been Leicester's Achilles' heel all season, and despite protests it came off Dawson's arm replays showed it was off the top of his sleeve and the goal was given, with VAR saying there was not enough evidence to overturn it.

The result does nothing to ease the pressure on Brendan Rodgers with his side remaining 11th, while the Hammers sit in fourth having played more games than the four teams directly behind them.

It will feel like an opportunity missed for West Ham after Manchester United and Tottenham's slip-ups.

They will have wanted to take all three points and move three clear of Manchester United, four ahead of Arsenal and even further ahead of Tottenham and Wolves.

David Moyes may feel his side should have gone for the jugular while Leicester struggled in the first 35 minutes - not even having a shot on target until the 39th.

After taking an early lead against a Leicester side completely bereft of any confidence, they failed to take advantage.

Declan Rice agreed: "Disappointment really, a game of two halves. We could have used our chances better in the first half and they were on top in the second half.

"We have been working hard on our set-pieces and a good point in the end."

The fact is this was a day when West Ham were not at their best, conditions were horrible and in the second half, they were up against a side being roared on by their fans.

This squad always believe though, as shown by winning 13 points from losing positions this campaign. More than any other side in the top flight.

They still left the King Power Stadium with a point could prove vital at the end of the season.

It is their never-say-die attitude that means Champions League football will remain a possibility right until May. 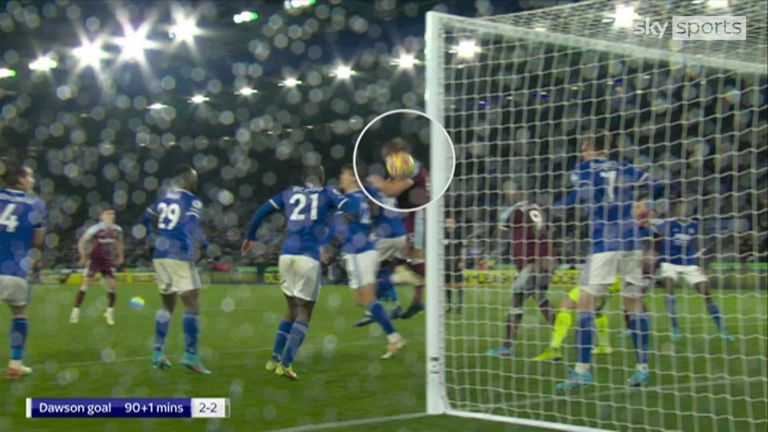 Graeme Souness wanted clarification on why Craig Dawson’s late equaliser was not ruled out after VAR looked at the incident. Micah Richards felt it was not a clear and obvious error and therefore the correct decision was to award the goal.

Leicester have struggled at the back all season and that continued against West Ham.

The Hammers were not fluent, did not put together quick-passing moves and never really looked like creating chances.

But they still managed to score two goals and the hosts' defensive issues were the main reason why.

One long ball forward from Issa Diop caught the Foxes' backline square and Bowen took advantage brilliantly by racing through and scoring.

Once they were 2-1 up, they were comfortable for the most part and had plenty of the ball. At no point was Kasper Schmeichel really forced into a save.

Yet their inability to defend corners reared its ugly head again in stoppage-time as Dawson was able to shoulder the ball into the back of the net.

Rodgers was clearly deflated at the end, saying: "We have closed out the game really well, made subs to see the game through. Kasper Schmeichel did not have too much to do today so from the static position, you have the height and numbers, just go deal with it. Unfortunately the last few games we have conceded late here."

Ultimately, it doesn't matter how dangerous Barnes, Patson Daka or James Maddison may look. If Rodgers cannot find a way to shore up the backline, Leicester are going nowhere fast.

● Leicester are winless in four Premier League games (D2 L2), their joint-longest run in the competition under Rodgers, while they last went longer without victory in February 2019, in Claude Puel's final six league games as Foxes' manager (D1 L5).

● Five of Leicester's last seven goals conceded in the Premier League have come in the final 10 minutes of play, while only West Ham and Watford have conceded more in this timeframe than the Foxes' eight this season.

● Leicester have conceded 14 goals from set-pieces (excluding pens) in the Premier League this season, more than any other team. 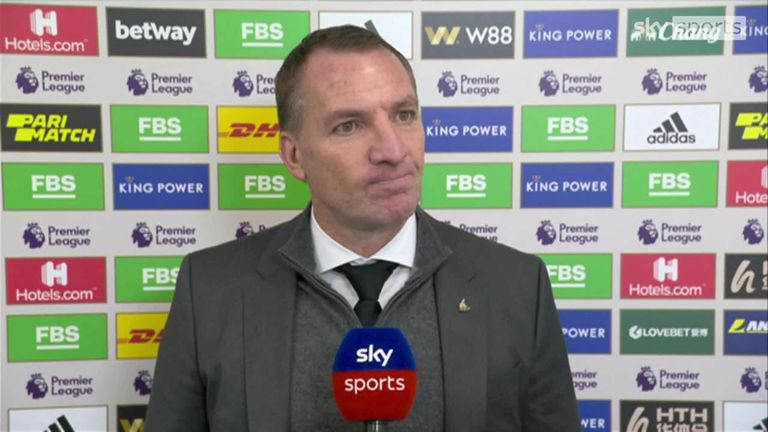 Brendan Rodgers was clearly disappointed with Craig Dawson’s late equaliser in Leicester’s 2-2 draw with West Ham and said that it was really deflating for himself and his players.

"We have had a few of them lately, deflating for the players," he said.

"Second half we were outstanding and first half West Ham were better. Second half was like watching us of old, speed of the game and chances. That is seven points dropped in our last three games from good positions, it is disappointing.

"There was anxiety there but possession is a mantra, you have to take the ball and be brave. Naturally, when you are inconsistent the crowd will be edgy. Second half we got up the pitch."

He added: "Firstly he has not declined [a new contract]. I have seen stories but the position is exactly the same. He is a fantastic player and there has been no movement. He has worked well and until his last days here, he will always give his best. He is a top professional and you saw his commitment today." 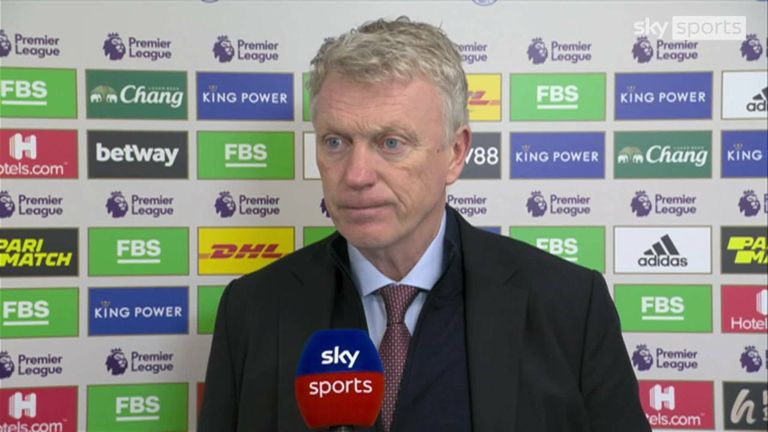 David Moyes felt his West Ham players showed resilience to grab a late equaliser in the 2-2 draw against Leicester but was disappointed that they allowed the Foxes back into the game after taking a early lead.

Opposite number David Moyes admitted his frustration West Ham gifted Leicester a route back into the game.

Moyes said: "We started the game quite well, had control but gave it away before half-time, gave them a leg up and it was a penalty kick. They got a goal from it and second half we did not play well but showed resilience to get a point.

"We had not really given them many opportunities, we had chances but did not take it. We were punished for it.

"In the first half I felt annoyed after going into a good lead and gave them a leg up. It says lots for the players, we have come quickly and made massive strides in the last couple of years. I will squeeze everything out of them and I want us to challenge the top teams."

The Hammers were forced into a late change as Kurt Zouma trudged off the pitch with illness.

Moyes revealed the centre-back had a stomach bug and it was nothing to do with the fallout from the video of him kicking his cat.

"He was ill before the game, wanted to play, we wanted him to play as well," Moyes said. "He was sick during the night, he stayed away from the players and did not eat much. Once he got out he did not think it was possible. We told Issa Diop to be ready. It is a stomach bug, probably something he has eaten."

Bowen's fine strike to give West Ham the lead was his seventh in his last seven games in all competitions.

The winger is in the form of his life and Micah Richards believe the former-Hull player is ready for his first England call-up.

Richards said: "I gave him the big build up because it is not just now, I think he has done it consistently all season.

"It's not just the goals, it's his work rate. He is always helping out his full-back, he is not afraid to go in areas where some people shy away from the ball. He can run in behind and the quality of that finish is devastating.

"He's got so many variants to his game that I think he is ready for that England call-up now."

Bowen's on fire - the stats

● Bowen has been directly involved in 16 Premier League goals this season (eight goals, eight assists), only Mohamed Salah (25) has more. The last West Ham player to be involved in more goals in a single season was Marko Arnautovic in 2017-18 (17, 11 goals, six assists).

Leicester host Randers in the Europa Conference League knockout play-offs on Thursday at 8pm while West Ham host Newcastle in the Premier League next Saturday at 12.30pm.