Report and highlights as strikes from Tony Watt and Liam Grimshaw see Motherwell come from behind to win 2-1 at Livingston; the hosts had lead through Alan Forrest's effort; the visitors record their first league win of the season, while Livingston are without a point after three games 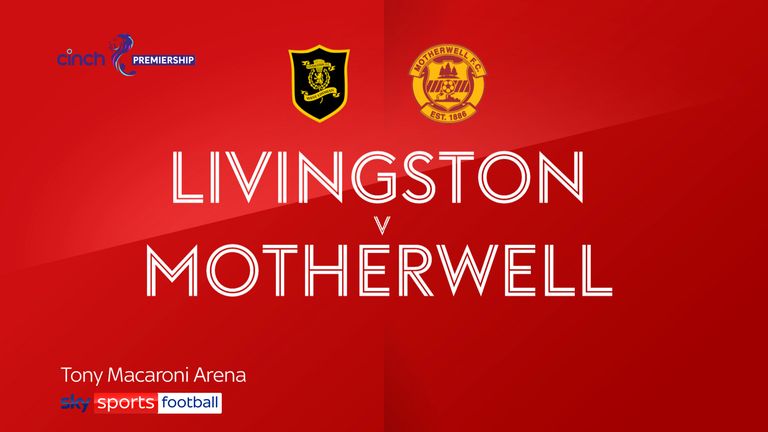 Highlights of the Scottish Premiership match between Livingston and Motherwell.

Liam Grimshaw scored his first professional goal as Motherwell came from behind to beat Livingston 2-1 in the Scottish Premiership.

David Martindale's side had moved in front through Alan Forrest before strikes from Tony Watt and Grimshaw turned the game on its head.

It was Motherwell's first league win of the season and leaves Livingston without a point after three games.

Livi were unchanged from the side that knocked out St Mirren from the Premier Sports Cup on penalties.

It was the visitors who started on the front foot. O'Hara had a volley that sailed just wide, before Kaiyne Woolery's effort was blocked for a corner.

Woolery then threatened again following a corner, but his shot was snuffed out by the defence.

But it was the home side who went in front seven minutes before half-time. Forrest took a pass on the edge of the penalty box, shifted the ball onto his left foot then found the far corner of the net.

Motherwell were level just three minutes into the second half. A short corner was nodded on by Juhani Ojala to Watt, who helped the ball over the line at the back post from a matter of yards.

Livingston had a great chance to go back in front when Jack Fitzwater's 50-yard pass fell perfectly for Odin Bailey, but rather than strike it first time, the forward took a touch and Liam Kelly was able to close him down.

It was end to end by this point. A driving Grimshaw run teed up a great chance for Woolery, but he could not find the power or accuracy to beat Max Stryjek.

There was then a moment of controversy when Stryjek and his own defender, substitute Kelly, collided on the edge of the box.

The ball ran free to Motherwell's Amaluzor, but the referee chose to halt the game with Kelly injured before the forward could roll it into the empty net.

Motherwell could have fallen behind moments later, but Nicky Devlin slashed his shot high over the bar after being picked out by Jackson Longridge.

And that miss came back to haunt Livingston when Grimshaw was able to tap in from close range after Watt's shot was saved for his first career goal.

Livingston boss David Martindale: "I don't think the way we defended our box today we deserved to take anything from the game if I'm honest. You can't win games of football defending like that.

"The goals we gave away were far too cheap and I'm really disappointed in the defensive unit - not just the defenders - both from open play and set-plays.

"Anyone watching could see their gameplan was to put every single ball from anywhere in our half in our box and that's what Motherwell did.

"I can fix it but as a group it's not great to lose a game of football in that manner.

"Nicky Devlin has a chance in the second half from a fantastic bit of play that he's got to score."

Motherwell boss Graham Alexander: "The goal meant everything to us all. You could see the way the boys celebrated with him [Grimshaw] on the pitch. They are all over him in the dressing room.

"He's a fantastic lad but, I'll be honest, we didn't expect him to come up with the winner. But he made a great run into the box off the blindside of his opponent and he gets his luck by getting into the right area.

"If we can get him three inches from the goal week in week out, he might have a chance to score more.

"We were unfortunate to be behind at half-time. We had good spells in the first half.

"Their goal was a bolt out of the blue for us and we lost our discipline and shape after that.

"We reset at half-time and said to the boys there was a game for us to win - and we did it.

"Every credit to the players because I thought we deserved it over the 90 minutes."

Livingston take on Hibernian at Easter Road, while Motherwell face Dundee at Fir Park, with both Scottish Premiership games kicking off at 3pm next Saturday.