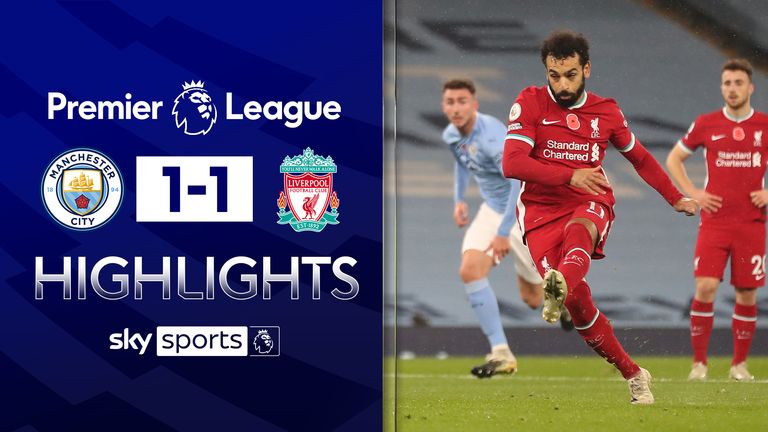 FREE TO WATCH: Highlights from Manchester City's draw with Liverpool in the Premier League.

Kevin De Bruyne put a first-half penalty wide as Manchester City failed to close the gap on Liverpool following a lively 1-1 draw at the Etihad Stadium.

Liverpool set up for an early blitz and got the opener through Mohamed Salah's penalty after Kyle Walker left a knee on Sadio Mane (13), but City found rhythm and levelled as Gabriel Jesus poked under Alisson (31) following a wonderful touch for his sixth goal in seven Premier League games.

In a breathless first half, City were then awarded a controversial penalty by VAR after Joe Gomez handled De Bruyne's cross, but the Belgian gave us a collector's item as he struck the spot-kick wide (42).

Liverpool then retreated in a game of two distinct halves - Jesus' unmarked header wide the only clear-cut chance - and it remained level as Jurgen Klopp's side failed to move top of the Premier League, but kept their five-point leader over City, who have a game in hand.

How points were shared in tale of two halves

This first half was 45 minutes of football for the ages, the level of attacking "world-class" according to Gary Neville, as the Premier League's top two sides in recent years went full pelt.

Jurgen Klopp insisted before kick-off his side would be brave at the Etihad, and he was true to his word as Liverpool burst out of the blocks with what became a 4-2-4 formation on the ball.

And they got the goal their early energy deserved as Walker stuck out a knee to catch Mane on the left of the box after some lovely Liverpool build-up play, and Salah's spot-kick was too strong for Ederson, despite guessing correctly to his right. 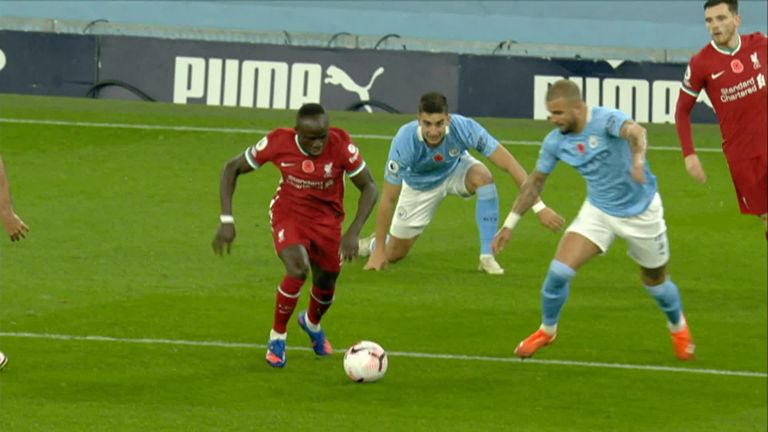 Roy Keane slams Manchester City's Kyle Walker's defending after giving away a penalty in their match with Liverpool.

Forty-five seconds before the goal at the other end, Raheem Sterling had been nudged on the edge of the box by Diogo Jota, but because the incident was not inside the penalty area and in a much earlier phase of play, it was not reviewed by VAR.

After Sterling's effort from an acute angle was blocked well by Alisson, City began to locate the gaps in Liverpool's midfield.

Georginio Wijnaldum was pulled out of position, meaning De Bruyne could feed Jesus in the box, and his sublime touch on the turn - the Brazilian claimed afterwards he meant it - allowed him to gain a yard on Trent Alexander-Arnold and poke under Alisson from eight yards before Joel Matip could block.

VAR then got involved to add to the drama as Gomez blocked De Bruyne's cross with his hand in the box, awarded by referee Anthony Taylor after consulting the pitch-side monitor.

It has been an unusual Premier League season so far, but the sight of De Bruyne sticking his penalty wide was up there with the most bizarre.

The second half was more measured as both sides desperately looked for control; Jesus missed a fine chance to put City ahead, heading wide unmarked after Joao Cancelo brilliantly found him behind the Liverpool defence.

Alexander-Arnold was then forced off with a worrying calf injury, replaced by James Milner, and Liverpool's passing became sloppy as City laboured to force a winner that would bring them to within two points of the champions.

For Man City, Gabriel Jesus made his first Premier League start since the opening day of the season after recovering from injury. It was one of two changes from the win over Sheffield United with Ilkay Gundogan replacing Bernardo Silva. Riyad Mahrez dropped to the bench as Ferran Torres kept his place.

Liverpool started both Diogo Jota and Roberto Firmino, in a front four with Sadio Mane and Mohamed Salah, while Joel Matip was back in central defence to replace Nat Phillips. Midfielder Curtis Jones dropped to the bench for the champions.

Liverpool looked more comfortable with a draw, settling back into a 4-4-2 as Roberto Firmino was replaced by Xherdan Shaqiri, and it remained cagey and cautious as the game petered out.

In a season lacking in certainty, this game of two halves went some way to proving these two sides remain the heavyweights, even in missing their key players. But as City sit 10th in the Premier League, it's clear this was a better result for champions Liverpool. 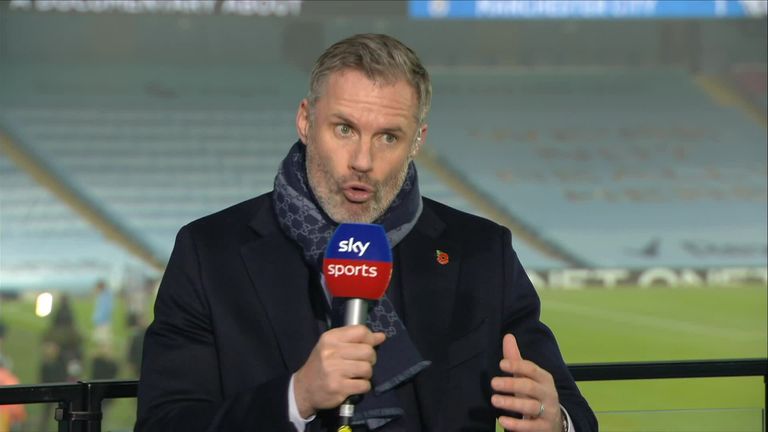 Jamie Carragher says it's almost impossible for defenders to move their arms out of the way when they're running and has questioned the penalties awarded for Man City and Leicester on Super Sunday.

"On a personal note, it's frustrating. At that moment I was running towards goal, I'm not going to run with my hands behind my back. I'm not going to dispute the ball hitting my hand, but I didn't try and handball it.

"It's frustrating the ref goes over and looks at it in slow motion when De Bruyne has hit it as hard as he can. He made a decision, that's that, and I had to accept it, but there's enough conversation going on around that rule at the minute."

"Liverpool were fantastic early on, and that was the moment you thought they had to push on and win the game, because City are too good to be dominated by anyone for the whole game.

"I just think of how many opportunities Liverpool had in terms of dangerous situations, but they didn't ever get that chance where you thought they must score. They never capitalised on that first half an hour and the domination they had and, in some ways, the game petered out.

"I don't think City were anywhere near their best at any stage, really. I just think Liverpool's energy levels dropped slightly in the second half. City dominated possession without ever really looking like scoring."

"The gamble was daft and crazy, but the second part to dangle a leg out… he knows he's going to give away a penalty. I've watched him over the years, and he's got that in his locker.

"He's got that daftness, he can make idiotic decisions and when he compounded his first mistake with the second one, I wasn't that surprised.

"Some of his defending over the years has been shocking. Over the last few months he's been in his best form but he's 30 years of age and he's doing the same daft things. He'll never learn."

Man City boss Pep Guardiola: "Tight game. They started well, we conceded, and after we take the game. It was tight. Second half we had the more clear chances. But a draw is a fair result." 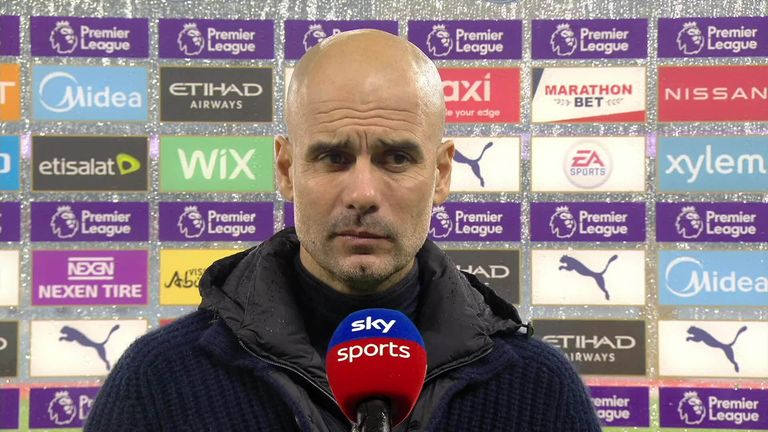 Pep Guardiola slammed the decision to continue with only three substitutes in the Premier League, calling it a disaster and asking for more protection for players.

On the need for five substitutions: "Look, international English player, Trent Alexander-Arnold, he's injured. So, all around the world it's five substitutions, but here we believe we are more special people. We don't protect the players, and that's why it's a disaster. In this calendar, especially. I will demand, if the people allow, we have to come back to five substitutions. If not, it's difficult to sustain it.

Liverpool boss Jurgen Klopp: "Super football game to be honest, from all points of view. Two top teams, ready for a massive fight, energy level of both teams was incredible. Obviously a little surprise for the opponent, a different system. We had so many counter attacking moments, obviously we didn't finish it off, a little bit of a shame. 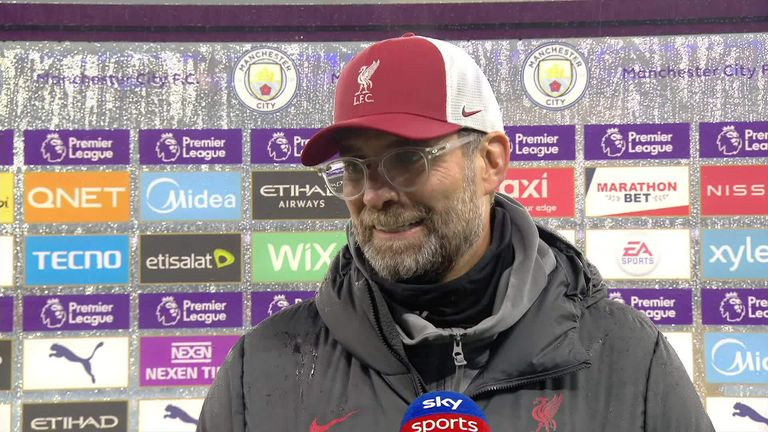 Jurgen Klopp felt it was a super game of football as Manchester City and Liverpool cancelled each other out at the Etihad Stadium.

"It was a tough decision to be honest to change a system before playing City. The boys are just ready to listen, ready to adapt, to perform, I think in a lot of moments, we could have created bigger chances. But I am completely fine.

"We were brave, of course. We had moments when we played too many long balls, but it's normal, the demand on concentration was incredible. In so many moments when we came back to football ways, we caused City problems, and they're a top team, and we showed tonight we are a top team as well."

Manchester City go to Tottenham after the international break on Saturday, November 21, live on Sky Sports Premier League at 5.30pm, and then go to Olympiakos in the Champions League at 5.55pm on Wednesday, November 25.

Liverpool host Leicester on Saturday, November 21 at 3pm, before hosting Atalanta in the Champions League at 8pm on Wednesday, November 25.