FREE TO WATCH: Highlights from Manchester Utd's victory over Tottenham in the Premier League

Marcus Rashford scored twice for Manchester United as they beat Tottenham 2-1 to leave Jose Mourinho empty handed on his return to Old Trafford.

Rashford struck early in the first half, before the hosts were pegged back before the break by a superb Dele Alli goal. Rashford then converted the winner shortly after the break from a penalty he won himself to ease some of the pressure on Ole Gunnar Solskjaer.

The result lifted United up to sixth in the table, albeit eight points behind Chelsea in fourth, while Spurs - who lost for the first time under Mourinho - drop to eighth.

It was a huge morale-boosting performance from United and for Solskjaer, which will stand them in great stead ahead of the Manchester derby at the Etihad Stadium on Saturday evening, which is live on Sky Sports Premier League.

It took just six minutes for United to take the lead and it came in somewhat opportunistic fashion, as Davinson Sanchez dallied on the ball for too long and Jesse Lingard picked his pocket before finding Rashford.

The England striker then caught Paolo Gazzaniga cold with a near-post drive from the left-hand corner of the 18-yard box, which the Spurs goalkeeper should have done far better with.

Gazzaniga did redeem himself, however, with three fine saves as United pushed for a second. The first after 23 minutes to deny Mason Greenwood from close range, the second and third shortly afterwards from Rashford, as he tipped a 30-yard piledriver onto the bar, then pushed a curling effort from just inside the box wide.

United would pay for those missed opportunities as Spurs levelled in remarkable fashion shortly before the break. Alli has been in fine form since the arrival of Mourinho and his finish was spectacular, vintage stuff from the midfielder.

The ball arrived in his path with his back to goal from a David de Gea save, but in two sleek movements he flicked it over two defenders, turned, and then finished past the Spaniard. United simply had no time to react to his moment of brilliance.

Shortly after the break, though, United were back in front. Rashford was tripped by Moussa Sissoko after charging past him into the box and he stepped up himself to send Gazzaniga the wrong way with what proved to be the winner.

'United's best performance of the season'

Perhaps Manchester United should arrange for Mourinho to be in the opposition dugout for every game because this was their best performance of the season.

Perhaps the only criticism on a heady night when the manager's name was roundly sung was United's inability to add to their two goals, but whatever way you look at it there was an undoubted improvement.

United had energy and fight and in Rashford the best player on the pitch, his confidence and ambition infecting those around him as Spurs were halted on almost every occasion.

Victor Lindelof bellowing at Harry Maguire in the 93rd minute told you just how much it meant to United to make this their fifth Premier League win.

So does that mean the Manchester Derby is now a free hit for Manchester United? As one of the sages of the North West press pack corrected me: "Manchester United should never need free hits." Ole remains at the wheel and bearing in mind his opposite number, he'll have enjoyed this spin.

'Jose is papering over the cracks right now' 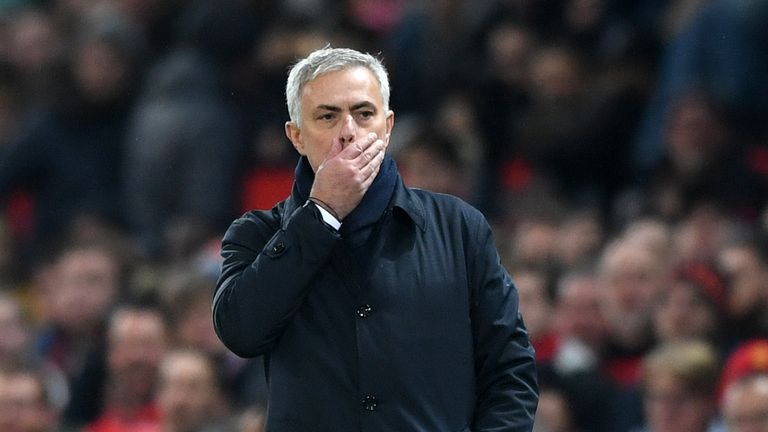 Paul Merson says Manchester United were much the superior side against Tottenham and that a lot of Spurs’ old problems resurfaced in the loss at Old Trafford.

"Tottenham were pretty poor if I'm being honest. They turned up thinking, 'we'll just role United over the way we're playing'.

"Jose is papering over the cracks right now, he's like Polyfilla. They are not playing well at the moment. Jose knows he's got a lot of work to do at Tottenham.

"When you look at this game you think 'are these players with Mourinho?', because this Spurs team look exactly the same as when Mauricio Pochettino was in charge three weeks ago. It's not great for Tottenham, they probably thought they had turned the corner, but they are on a bend at the moment."

Manchester United's Ole Gunnar Solskjaer: "One of the best performances of the season, definitely. We've had spells against Liverpool, Chelsea and Leicester but the first 40 minutes were excellent today. But the reaction after they scored was good at the start of the second half.

"That is always the concern because this season we've been winning, gone to a draw and then stayed at a draw. But the players never gave in, trusted themselves and we deserved to win." "You want to start at 1-1 and go for the three points, but then we arrived in the second half and they played the game they wanted to play. They dropped the blocked, defended, had a couple of dangerous counter attacks. We had the ball in the final third, the goal could have happened, but it didn't, and they deserved the victory."

Man of the Match: Marcus Rashford

A brilliant performance from the Manchester United and England striker. He was unplayable at times and looked determined to prove a point in a No. 9 role during Mourinho's return to Old Trafford. His first goal may have been a little fortunate but he ran Tottenham ragged all night, leading his side to all three points.

United travel to Manchester City for the derby on Saturday Night Football at 5.30pm - live on Sky Sports Premier League from 5pm - while Spurs host Burnley at 3pm.