Match report as Manchester United suffer a 1-0 home defeat to Atletico Madrid to end their Champions League hopes at the last-16 stage; David de Gea: "There are too many years without any trophies"

Manchester United are out of the Champions League after a 1-0 home defeat to Atletico Madrid saw them beaten 2-1 on aggregate.

Renan Lodi's first-half header was enough to take Diego Simeone's side into the quarter-finals as Ralf Rangnick's team endured a frustrating evening at Old Trafford.

Anthony Elanga had appeared to be fouled in the build-up to the goal but United lacked the spark at the other end that was required to break down a resolute Atletico.

Man of the match: Renan Lodi.

Already out of the FA Cup, the defeat means that United's slim hopes of ending their long trophy drought this season are at an end, with goalkeeper David de Gea later admitting: "There are too many years without any trophies."

How Man Utd were eliminated

Manchester United were the more enterprising team for much of the first half as they tried to press Atletico with some success, rushing the Spanish side to the delight of the crowd.

Raphael Varane's tackle on Joao Felix was cheered, Fred's flicks and tricks brought roars, while Cristiano Ronaldo was winning tackles by the touchline, dribbling down the wing.

There were moments, hints that Atletico might fold. Elanga spurned a wonderful chance from close range. Bruno Fernandes wanted a penalty. Nothing was given.

Ralf Rangnick made three changes to the Man Utd team that beat Tottenham at the weekend, with Marcus Rashford, Paul Pogba and Nemanja Matic dropping to the bench.

Anthony Elanga, Bruno Fernandes and Scott McTominay came into the team, with the latter two having recovered after being forced to miss the Spurs game.

The Atletico forwards had only long balls to work with for much of the opening 45 minutes but when they did play, it was United's frailty that was systematically exposed.

The warning came just before the goal, Marcos Llorente narrowly offside when setting up Joao Felix to score. The Atletico wing-backs had too much space. It proved costly.

Elanga appeared to have been fouled at the other end but Atletico were soon through United, Joao Felix's backheel finding Antoine Griezmann whose cross was headed in by Lodi.

De Gea, who had earlier pulled off an extraordinary save to keep out Rodrigo De Paul's speculative shot, could do nothing. Diogo Dalot could not say the same.

A response was needed. Elanga drove wide, Fred dragged another past the other post to Ronaldo's disgust, before Jadon Sancho volleyed the ball into the Stretford End.

Rangnick made a triple substitution midway through the second half. Fernandes was withdrawn. But the formation stayed the same until Edinson Cavani came on for Fred.

Jan Oblak did save well from Varane but the final substitution only capped a miserable night - captain Harry Maguire jeered off as he was replaced by Juan Mata.

Rangnick on a night of frustration 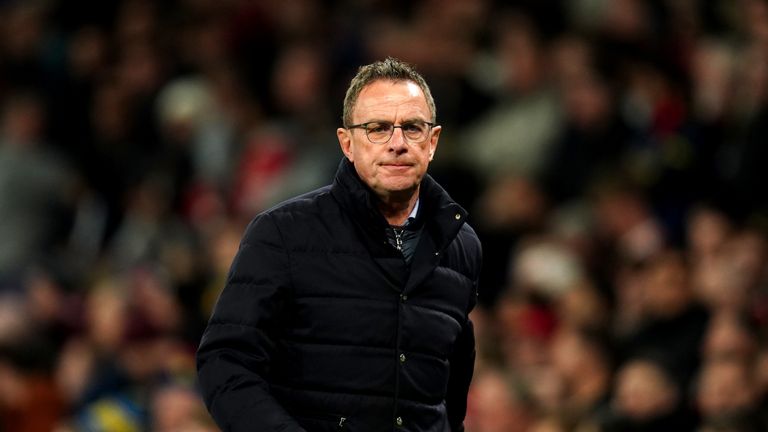 Manchester United interim boss Ralf Rangnick was left frustrated by refereeing decisions which he believed allowed Atletico Madrid to run down the clock as they exited the Champions League.

"I think we played a good first half," said Rangnick. "All those things we planned to do we did. The only thing we did not do was convert that energy into scoring the first goal ourselves. One thing we cannot do against Atletico is concede the first goal."

Rangnick was frustrated that the officials did not award the foul on Elanga in the build-up to the game's only goal. "I did not think we should have been 1-0 down," he said. "For me that was a foul on Elanga. That was the only really dangerous moment, apart from the offside goal that they scored," he said on BT Sport.

The Man Utd interim manager felt the officials allowed Atletico to get away with antics which disrupted the flow of the game. "The second half, I don't know if the game was played for more than two minutes without someone down on the floor. There were some curious decisions, I don't know if they were decisive."

He added on BT Sport: "We had one or two good moments where we should have scored. Conceding that counter-attacking goal before half time didn't make life any easier for us.

"In the second half it was difficult - it was always interrupted with somebody lying on the floor. [The ref] fell for those time-wasting antics and four minutes extra time was a joke."

De Gea: It's not good enough Manchester United goalkeeper David de Gea admitted it has been too long since the club have been fighting for trophies and says they need much more from everyone after losing to Atletico Madrid in the Champions League.

"There are too many years without any trophies, even without fighting for trophies," De Gea said.

"So I think we need to be clear we want to achieve good things, fight for trophies, we don't just want to play for the top four and be there, get out of the Champions League in the quarter-finals. Something like this.

Simeone: 'We controlled the game'

"It was very stable," said Simeone of his own team's performance.

"They caused us some issues down the sides, they started to cause us problems, then we changed things. Griezmann worked hard down the right and that enabled us to be better positioned.

"But it was not just this. We managed to hit them on the counter and that confirmed that the solutions were going to be there. I think the team really knew what they needed to do today.

"In the second half, we controlled the game and that made us more comfortable. We knew the opponent likes to play on the counter-attack so we decided to deny them the spaces."

Analysis: What next for Man Utd?

There was little realistic chance of Manchester United pulling off something extraordinary in this Champions League. The Premier League table reveals the gulf between them and their domestic rivals even before the best clubs from continental Europe are considered.

However, this was still a dismal evening for United because it was so predictable. Punished on the counter-attack after being exposed in the wide areas, what followed was grim: United trying to find a way through Atletico Madrid's defensive block. Ideas lacking.

Rangnick said afterwards that the one thing not to do against Atletico is concede first. That is what they did. Simeone understood the one thing that his team had to do. "We knew the opponent likes to play on the counter-attack," he said. Sit back. Let United have it.

What followed was turgid. United passed it to one side and then to the other. Crosses came in. Fodder for these centre-backs. An increasingly desperate Ronaldo tried to knock it past a defender and run round him. Maybe 10 years ago.

The fans at Old Trafford were vocal in the support at the start, seeing their side press their opponents, there was a real sense of occasion and signs that the team were up for the challenge. But once behind, familiar frustrations began to sour the atmosphere.

Maguire's distribution was sloppy and his cumbersome movements are beginning to antagonise frustrated fans. He is a strong character but this is an awkward situation for him now. He is in danger of becoming a symbol of the club's decline.

It is a club ripe for a rebuild, but one built to win now. It is mid-March and the 37-year-old Ronaldo has no trophies to play for. Maguire is 29, Varane is 28. Fernandes is in the worst form of his Manchester United career and Marcus Rashford is struggling badly.

Securing Champions League qualification will be the focus now but this was a night to remind everyone that merely qualifying is not enough for this club, the aim must be to construct a team capable of doing rather more than this once they are in it.

That demands difficult decisions about players' futures and correct ones about the future of the manager. Rangnick cannot stay but Mauricio Pochettino and Erik ten Hag, seen as the two strongest candidates for the job, have both been eliminated already too.

For De Gea, the exasperation was clear. "We all want the best for this club, especially myself," he added. "I have been here many years, I love this club. I really believe, I don't know when, that this club will be back at the top." But the wait goes on.

When is the draw for the quarter-finals?

The Champions League quarter-final draw will take place on Friday, March 18 at 11am UK time, with the balls being drawn out at UEFA's headquarters in Nyon, Switzerland.

The semi-finals will be drawn at the same time, meaning clubs and fans can plot out their potential route to the Paris final.

Manchester United's next engagement is not until April 2 when they host Leicester City in the Premier League, live on Sky Sports; kick-off 5.30pm.

Atletico Madrid are back in action on Saturday when they travel to Rayo Vallecano; kick-off 8pm.