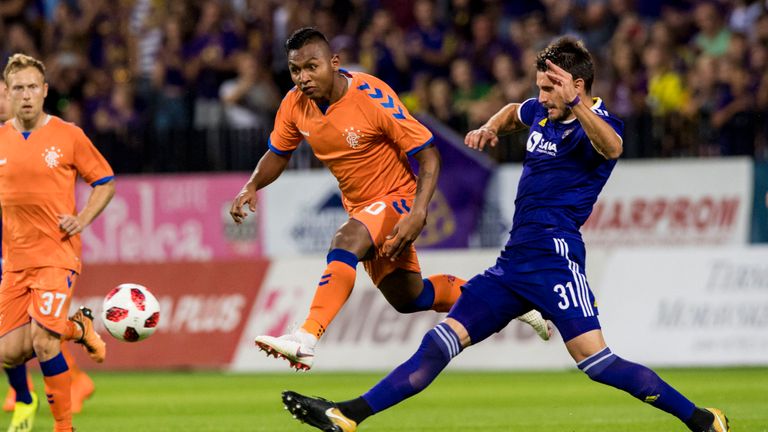 Rangers held their nerve in Maribor as Allan McGregor's stoppage-time penalty save sealed the 0-0 draw which sees Steven Gerrard's team into the Europa League play-offs.

The Rangers boss vowed on Wednesday he would not park the bus and look to protect last week's 3-1 first-leg lead.

But the Light Blues had to grit their teeth as the Slovenians came for them at the Ljudski Stadion, with McGregor capping off a fine display as he repelled Marcos Tavares' late spot-kick.

A 4,600-mile round trip now beckons for Gers as they march on to face FC Ufa after the Russians denied Rangers a shot at revenge against Progres Niederkorn for last year's humiliating upset.

Ryan Jack was back after 10 days out with concussion but Lassana Coulibaly missed out with the strain picked up during Sunday's win over St Mirren.

It was a mistake from skipper James Tavernier which quickened the Scots' heart-rates but McGregor - as he was all night - was there to rescue as he pushed away Tavares' effort.

Andy Halliday was plugging the left-back slot but the nervy converted-midfielder was grateful to see a couple of misjudgements go unpunished while Nikola Katic did well to put off Sasa Ivkovic as he met Amir Dervisevic's corner six yards out.

Dervisevic almost caught Rangers off-guard as he lined-up a free-kick 30 yards out. A decoy runner was sent into the Gers box from deep and as the visitors dropped back to cover, the Slovenia international whipped a free-kick towards the top corner. Once again McGregor was on his toes, pulling off another vital stop.

Jamie Murphy wasted another chance for Gers after being sent clear by Alfredo Morelos while the home fans groaned as another deflected Dervisevic effort went close.

The tense atmosphere grew even more hostile as Belgian referee Jonathan Lardot stopped the game briefly to collect an array of objects that had rained down towards McGregor as he took a goal kick.

But the Gers keeper continued to defy the home support, pulling off a wonder block at point-blank range as Aleks Pihler nodded down for Tavares.

There was one last fright for Gers in added time as Connor Goldson gave away a penalty with a trip on Luka Zahovic, but McGregor again refused to be beaten as he blocked Tavares' strike with his legs.