Report and highlights from the Sky Bet Championship clash between Middlesbrough and Blackburn Rovers at the Riverside Stadium as Jonny Howson cancelled out Sam Gallagher's strike in a game that saw both sides finish with 10 men. 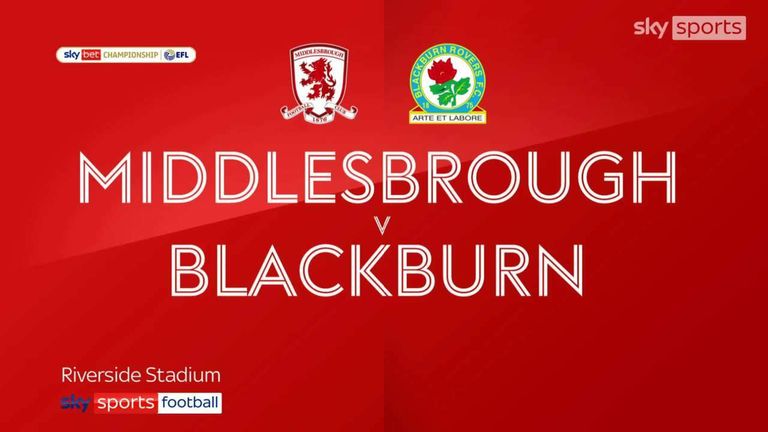 Highlights of the Sky Bet Championship match between Middlesbrough and Blackburn Rovers.

Jonny Howson's first goal since October earned Middlesbrough a point with a 1-1 draw against Blackburn at the Riverside Stadium.

Neither side could find a winner despite both teams finishing the Championship fixture with 10 men after Hayden Carter's 79th-minute red card was followed by Sam Morsy's dismissal two minutes later.

Before those, Boro captain Howson had lobbed goalkeeper Thomas Kaminski with nine minutes remaining of the first half to cancel out Sam Gallagher's brilliant 17th-minute opener.

Former Middlesbrough skipper and manager Tony Mowbray watched his Rovers side make a fine start by keeping the hosts at bay before taking the lead.

But Blackburn were unable to hold on to their advantage and return to winning ways following a first defeat to West Brom a week earlier.

Middlesbrough, who were watched by Norwich's Onel Hernandez ahead of him completing a loan deal, went closest to scoring in the early exchanges.

The lively Marcus Tavernier struck a volley that was well saved by Kaminski following some good work from striker Matt Crooks.

But it was Blackburn who took the lead when Gallagher, having been picked out by Ian Poveda, got the ball out of his feet before striking left-footed powerfully from the edge of the area in off the left post.

Blackburn looked lively in possession but it was Middlesbrough who did most of the attacking for the rest of the half, even though Kaminski did not have too much to stop.

Tavernier and his Boro teammates had a penalty claim waved away by referee Michael Salisbury after former Riverside player Daniel Ayala clearly tugged at his shirt.

But Middlesbrough levelled in the 36th minute when some quick thinking from goalkeeper Joe Lumley and Anfernee Dijksteel sparked a quick counter-attack.

That led to Dijksteel's pass playing Howson in behind the Blackburn defence and he lifted his chip over Kaminski and it shaved the post before dropping in.

After the restart Middlesbrough continued to probe. Kaminski had to be alert to turn a drive from Paddy McNair around the post early into the second half.

Blackburn, after a couple of substitute introductions, started to press more and in a bid to find a winner Middlesbrough handed a debut to new signing Toyosi Olusanya.

And Olusanya, plucked from non-league Billericay, was almost in the right place to convert Tavernier's effort that was spilled in front of Kaminski with 19 minutes left.

Then the two reds in two minutes arrived, with Blackburn full-back Carter dismissed for a second caution for leaving a high foot on McNair deep in the Middlesbrough half.

And Middlesbrough's Egyptian midfielder Morsy headed for the tunnel having been deemed to have left his studs on Tyler Magloire moments later.

It could have been worse too when Lewis Travis and Olusanya were only cautioned for a tussle which could easily have seen those sent off too.

Middlesbrough's Neil Warnock: "It was a very poor decision, he said to the fourth official that it was a straight red card (for Morsy), deliberately injuring him. I don't even think it was a yellow. A red card? He has flicked his foot out, not a straight leg I will give him that, but he hardly made contact. It compounds his afternoon. We will appeal against it.

"But we played some nice stuff today, even though we had nothing on the bench. Hopefully we will have two or three by Tuesday who we can change a game with."

Blackburn's Tony Mowbray: "It wasn't very nice was it? It takes two teams to play a football match, Boro deny you playing that, it's very combative in there. It was an eye opener for our young players today. We stuck at it, there was no fluency to the game. Daniel Ayala was immense. It was no surprise that when he was up for a corner they broke and scored.

"Sam has a bazooka in his right foot, he never uses it. I am pleased he did today. It flew in off the post. I thought we looked like we could score. It was a bit of blood and thunder, not sure if it was a game of two sending offs, but there you go. I think Hayden tried to kick the ball, the lad put his head in. The ref could have used his common sense. The first yellow was definitely a booking.

"The second red? I can't see Morsy's red card. The referee was quick to get it out. I will let Neil complain about that."