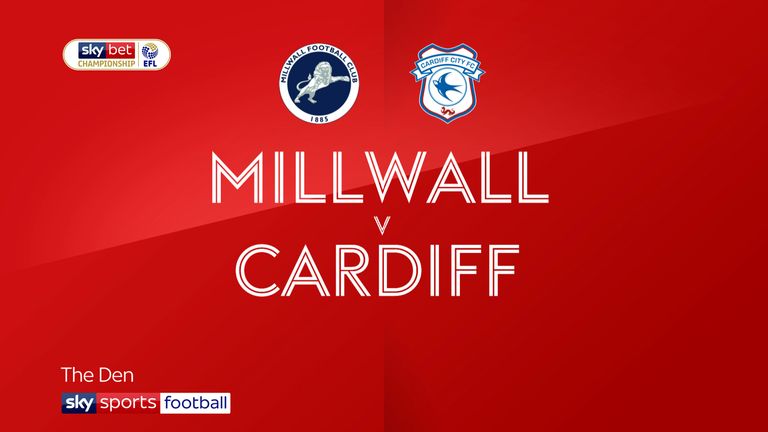 Highlights of the Sky Bet Championship match between Millwall and Cardiff

Incoming Millwall boss Gary Rowett watched his new side twice come from behind thanks to Tom Bradshaw's brace to earn a 2-2 draw at home to Cardiff and move five points clear of the Sky Bet Championship drop zone.

Danny Ward needed just 12 minutes to put the visitors ahead, but Bradshaw would strike either side of Junior Hoilett's stunning effort to share the spoils.

Rowett was appointed manager on Monday and will take over for Saturday's match, at home to former club Stoke, while caretaker Adam Barrett ends his spell with one win, one draw and one defeat from three games after Neil Harris' departure.

Neil Warnock's men remain winless on the road this season and sit five points from the play-offs in 13th.

The Bluebirds drew first blood, Hoilett swinging in a cross from the left and Ward nodding home from close range through the keeper's legs after 11 minutes.

Cardiff looked to capitalise on their early advantage, with Lee Tomlin and then Ward forcing low saves from Bartosz Bialkowski with shots from outside the area.

Jake Cooper wasted a good chance, directing a tame header straight at Neil Etheridge from a corner, before Matt Smith sent his own effort narrowly over but was penalised for a foul.

Rowett was given reason to smile when Bradshaw popped up on the right of the box and fired home a deflected shot to level shortly before half-time.

The second half started in fiery fashion, with Cardiff carving out several half-chances, Tomlin and Ward firing over after encouraging build-up play.

The Bluebirds made their dominance count when Hoilett and Tomlin combined well and the Canadian winger curled home a brilliant effort.

Tempers rose as Joe Bennett earned a yellow card for illegally halting Romeo on the breakaway, one of several fouls that disrupted the game.

With 20 minutes left, a superb Bialkowski stop from Aden Flint kept the Lions in the game.

Millwall were rewarded for a rare foray forward as Bradshaw latched onto the ball in the box, jinked past one defender and lashed another equaliser high into the net.

The hitman could have had a hat-trick minutes later, but shot straight at Etheridge from a tight angle.

Suddenly Millwall were asking the questions as Etheridge had to push away a venomous Jed Wallace shot in the closing stages but both sides stood firm to give Rowett plenty to think about as he steps into the manager's office.

Millwall caretaker boss Adam Barrett: "I am just delighted with the character of the team after a difficult game on Saturday to come back twice tonight against a very strong Cardiff team.

"It has been a real topsy turvy two weeks and to come away with four points from the three games I am delighted for the boys and for everyone at the club. With a new manager, hopefully, he can come in and take us forward. I am delighted with the team and the boys.

Cardiff boss Neil Warnock: "It is probably the most frustrated I've ever been this season, and there have been one or two moments. It is scandalous really. I just don't know what to say.

"I have never felt so comfortable at Millwall. We had shot after shot after shot, chances from corner kicks and everywhere. We were so charitable with the two goals and it is unbelievable really, so I am disappointed, especially as this is as good an away performance as you are going to get at a place like this. I can't see many teams dominating as much as we did."