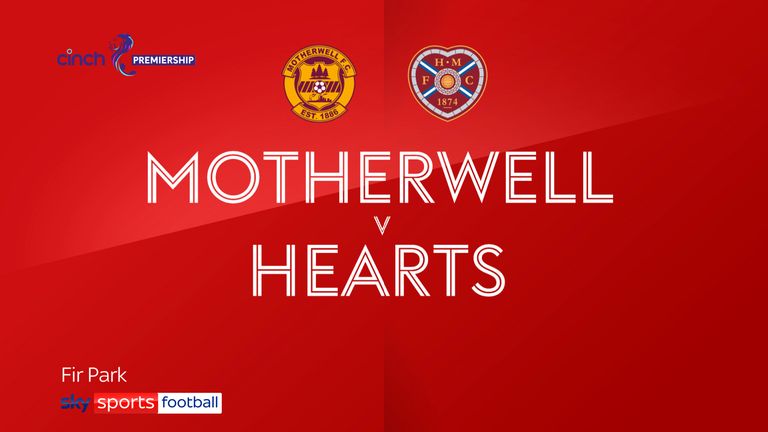 Highlights of the Scottish Premiership match between Motherwell and Hearts.

The 24-year-old attacker, signed from Queen of the South in the summer, fired in from close range in the 23rd minute but the turning point came after the break when the visitors went a man down and immediately conceded a second.

In the 65th minute, from the free-kick which saw Taylor Moore sent off by referee Willie Collum for picking up a second yellow card, defender Rickie Lamie headed in to confirm a second successive win for the Lanarkshire side.

For lacklustre Hearts, backed by huge and noisy travelling support, the chance to move into second place was passed up and that will be a source of frustration.

Well boss Graham Alexander, however, will be delighted.

He was forced into a reshuffle with Kevin van Veen suspended, Mark O'Hara and Juhani Ojala out injured and loan player Jordan Roberts unable to play against his parent club.

In came Lamie, Callum Slattery, Kaiyne Woolery and Shields as returning captain Stephen O'Donnell had to settle for a place on the bench after his ban.

Hearts made one change with Michael Smith in for Craig Halkett, out with a groin strain, while striker Liam Boyce was fit only for a place on the bench.

The Steelmen made most of the early running but in the 10th minute Jambos striker Ben Woodburn failed to control a Barrie McKay through ball which would have put him against Liam Kelly and the Well 'keeper and stand-in captain gathered.

Five minutes later Woolery drilled in a shot from the edge of the Hearts box as Scotland 'keeper Craig Gordon watched it fly harmlessly past his right-hand post - but he was soon to be beaten.

Following a swift move striker Tony Watt sent Woolery running down the right. His cross into the middle saw Sean Goss fail to connect properly only for Shields to pounce on the loose ball and sweep it past Gordon from six yards.

Moments later, as the Lanarkshire side pressed for a second, the Gorgie 'keeper was alert to beat away a 25-yard drive from Well midfielder Barry Maguire.

In the 44th minute a timely if robust penalty box tackle by Lamie on Josh Gingelly, sent clear by McKay, prevented the Tynecastle attacker getting his shot away.

Motherwell pressed at the start of the second half and Boyce replaced Woodburn just before the hour as the visitors fought to gain more control of the match.

However, another blow was suffered when Moore, booked early in the second half for a challenge on Nathan McGinley, was sent packing by Collum for another yellow card challenge on Shields which ended a Motherwell counter 30 yards from goal.

Goss whipped the free-kick into the far post where leaping Lamie headed back across Gordon and into the net and Hearts were in real trouble.

Gordon made a remarkable double save, first from Woolery's back-post header then from Shields' close-range blast from the rebound to prevent further damage and Motherwell managed the rest of the match without too much concern.

Motherwell visit Dundee next Saturday at 3pm and Hearts host St Mirren at the same time.