Motherwell 0-0 Hibernian: 10-man Motherwell hold on to draw with Hibs

Match report as Motherwell and Hibernian draw at Fir Park; Liam Donnelly was red-carded for the hosts; manager Graham Alexander was sent to the stands; Hibs remain two points behind Motherwell in the Scottish Premiership 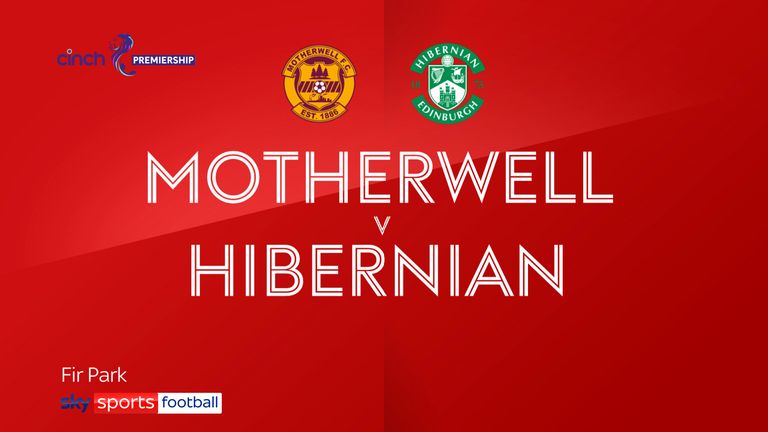 Ten-man Motherwell held out for a point in a goalless Premiership encounter with Hibernian.

Midfielder Liam Donnelly and manager Graham Alexander were both red-carded in the closing 20 minutes at Fir Park but Hibs could not capitalise.

Substitute Christian Doidge missed their best chance of the game as Shaun Maloney's side failed to register a shot on target.

The result kept Motherwell in fourth place, two points above their visitors.

The game was heavily affected by a swirling wind that seemed to disadvantage both teams.

Motherwell striker Kevin van Veen had the best opportunities of the first half. The Dutchman quickly became embroiled in an intriguing tussle with Belgium Under-21 international Rocky Bushiri and won a free-kick which he sent off the turf and into the arms of Matt Macey.

Van Veen had a better chance when Macey parried Connor Shields' strike into his path six yards out but the former Scunthorpe forward sliced wide.

Hibs wing-backs Chris Cadden and Josh Doig made some purposeful first-half forays but the home defence dealt well with their final balls.

Motherwell skipper Stephen O'Donnell had a shot blocked by Joe Newell from a decent opening early in the second half but the game got even tighter, although Hibs got a better grip on possession.

The game changed in the 73rd minute. Donnelly was the wrong side of the ball and tried to slide in and reach round Drey Wright but referee Andrew Dallas ruled it a foul and showed him a second yellow card. The Northern Ireland international had been booked earlier in the half for a foul on Chris Mueller.

Dallas immediately flashed another red card as he sent off Alexander for disputing the decision with the home boss reluctantly going down the tunnel.

Hibs substitute Ewan Henderson soon delivered a teasing ball that just zipped past the far post but Motherwell had the next chances with Van Veen seeing a free-kick deflected wide before Sean Goss had a shot blocked from the resulting corner.

Motherwell substitute Ross Tierney was sacrificed for a more defensive player 18 minutes after coming on, a decision which did not go down well with many in the home support. On-loan Celtic midfielder Liam Shaw came on for his debut.

Doidge's late chance came when a ball forward held up in the wind and home goalkeeper Liam Kelly hesitated but the striker blazed over.

"Liam has probably made two fouls all game. I saw their centre-halves making foul after foul in the first half and just a warning. That was where my frustration was.

"I think it's a harsh decision and I made my view point. But obviously I'm not allowed to."

Christian Doidge missed a good late chance for Hibs but Motherwell also threatened after the sending-off and the visitors did not register a shot on target in a game that was badly affected by a swirling wind.

Alexander said: "We held out with 10 men but it wasn't holding out before that. We were the team who had the chances, made their keeper make saves. I don't think we conceded a shot on target so I thought we played really well.

"When it goes to 10 men, it's tough but even then we threatened to score the winner a couple of times. I'm really proud of my players."

"Really pleased with the performance but slightly disappointed we didn't take one of the chances we had," he said.

"But in these conditions I have to be very pleased with how the team played.

"We maybe weren't as patient as we could've been when they went down to 10 men. But they're fourth and these games are maybe decided on fine margins.

"I can't criticise any of my forward players for missing chances, I want them to be brave.

"Although we didn't have any shots on target I still thought we created enough chances to win the game."

Motherwell travel to Hearts, while Hibs host Livingston, with both Scottish Premiership matches kicking off at 3pm on Saturday.