Match report as St Johnstone secure a late 2-1 win at Motherwell; Jamie Murphy gave the visitors a first half lead; Motherwell thought they had secured a point when Sean Goss' corner found its way into the net in the 90th minute but Stevie May then scored a winner deep into injury time 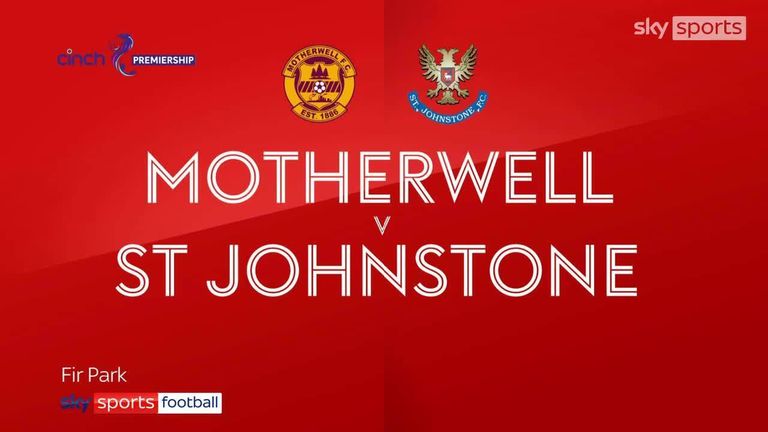 Highlights of the Scottish Premiership match between Motherwell and St Johnstone.

Stevie May scored a dramatic winner deep into injury time as St Johnstone secured a 2-1 victory over Motherwell in an entertaining Scottish Premiership match at Fir Park.

Jamie Murphy gave the visitors the lead with a low strike in the first half, before Motherwell thought they had secured a hard-fought point as Sean Goss' corner found its way into the net in the 90th minute, with Sondre Solholm wheeling away in celebration.

There was to be an even later twist, however, as May ran on to Ryan McGowan's header to slide a cute finish beyond Motherwell goalkeeper Liam Kelly and seal the points.

St Johnstone manager Callum Davidson chose to stick with largely the same side that began the season with a defeat against Hibs last time out, with Cammy MacPherson replacing the suspended Murray Davidson in the only swap.

Kevin van Veen had the first effort on goal in the third minute, but his free-kick sailed harmlessly over the Saints crossbar.

MacPherson then had the first attempt for the visitors in the 11th minute, as he won the ball and drove forward, but his low shot was well blocked.

St Johnstone had a great opportunity to take the lead in the 26th minute as Theo Bair went through one on one with Kelly, but the Motherwell goalkeeper saved easily.

They did not have to wait long for another chance, however, and two minutes later they broke the deadlock as Murphy latched on to a touch from Bair and expertly fired a crisp finish across Kelly and into the bottom corner.

The home side responded well though and they were inches away from a leveller in the 32nd minute as Connor Shields swivelled just outside the Saints box, but his effort came back off the lefthand post.

Paul McGinn then produced a goal-saving clearance to deny Andy Considine from three yards out, before Van Veen shot over for the hosts with the last kick of the opening period.

Motherwell were much improved after the break and Shields came close again shortly after the hour mark, skewing a deflected effort narrowly over the bar when Adam Montgomery was caught napping at the far post.

St Johnstone remained a threat on the counter and only a crucial touch from Solholm prevented the away side from doubling their lead as Bair waited for a tap in.

The home fans were left incensed with 10 minutes to go as Ross Tierney nipped in behind the Saints defence and went down under the challenge of McGowan, but referee Willie Collum waved away the protests.

In a frantic period, Matthews then clawed away Goss's awkward bouncing volley, before Joseph Efford went down under a challenge from the resulting corner, with Collum again unmoved.

The hosts kept coming and eventually their pressure told, with the ball trickling agonisingly over the Saints line from a deep inswinging Goss corner, with Solholm appearing to have got a touch on the way.

That looked to have been the game's decisive movement, before May's late show, as the Saints substitute latched on to McGowan's header to slide a first-time finish past Kelly to seal the win and send the away supporters wild.

"Nothing's changed and it's the last thing on my mind just now, it's just an overriding feeling of disappointment," he said.

"That's nothing to do with me, that's out of my control and I'll let the people who make those decisions do whatever they feel is best.

"It was a game we were confident we'd put everything into the preparation and we would get a positive result. It's never easy but to lose it the way we did, it's a hard one to take.

"The first goal is a straight long ball, with the second striker running so it's the most basic movement and we struggled with it.

"The second one, again, is a long ball and we make an absolute mess of it which results in a corner and we're still looking to chase the game and win the game.

"In the second phase, we switch off which can't happen and the two goals we lose are poor."

Davidson: I'm just happy we got that win today

"I quite like that every year people write you off," he said. "In the previous season we had a lot of expectations on our shoulders - this season no one thinks we can do anything.

"I think I've got a really good group of players there - it's a harder league, it's as simple as that. It's such a small league and last year was so tight, so it's important we start well and give ourselves an opportunity to stay in the league.

"It's positive that the spirit is there, I've got a lot of players who have played in the league before who know the game and I can see in the dressing room I've got a good togetherness.

"It's important to get that first win of the season, it's going to be a really tough league this season, you look at the teams above us and obviously the bigger teams are spending money.

"Picking up points is really important and for me, just happy we got that win today."

Motherwell travel to face Aberdeen in their next Scottish Premiership match on Saturday 13 August.

St Johnstone are away to Rangers on the same day. Both games kick-off at 3pm.