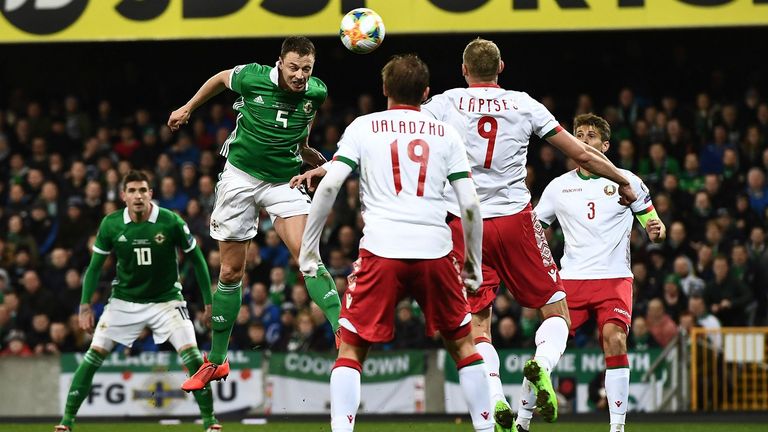 Northern Ireland made it two successive victories to kick off their Euro 2020 Group C qualifying campaign with a 2-1 win over a plucky Belarus side on Sunday.

Jonny Evans scored his third goal in a Northern Ireland shirt on the half-hour mark with an unmarked header. Three minutes later, winger Ihar Stasevich responded quickly with a fortunate equaliser as his deflected shot got the better of Bailey Peacock-Farrell (33).

After applying plenty of pressure in the second half, Northern Ireland grabbed a deserved late winner through Josh Magennis who poked home at the near post (87). But in injury time, Peacock-Farrell was called into action to make a vital save to deny substitute Pavel Nekhajchik (90+4).

Northern Ireland's second win in a row puts them top of Group C on six points; three clear of Netherlands and Germany.

Man of the match: Jordan Jones

The Irish started the game on the front foot, with Paddy McNair looking particularly lively early on. In the 20th minute, he arrowed the first shot on goal which forced Andrey Klimovich to parry away.

The hosts went on to break the deadlock on the half-hour mark through Evans. Niall McGinn's corner was flicked on by Steven Davis and into the unmarked Leicester defender's path to nod home.

Northern Ireland were unchanged from their 2-0 win over Estonia.

But three minutes later, Belarus got a surprise equaliser with their first shot on goal. Stasevich's hopeful effort took a wicked deflection off Stuart Dallas and looped over Peacock-Farrell into the net.

Northern Ireland dominated possession in the second half and Michael O'Neill decided to bring on Magennis in the 67th minute to add more firepower to the hosts' attack.

In injury-time, Peacock-Farrell preserved the Irish lead as he reacted quickly to get in the way of Nekhajchik's shot at the back post.

Man of the Match - Jordan Jones

The Kilmarnock winger was a constant danger down the left-hand side, alongside Lewis, with a hefty amount of Northern Ireland's attacks stemming from the flank he occupied.

His surging runs forward caused Igor Shitov with plenty of problems and twice played in very dangerous balls into the box which Kyle Lafferty perhaps should have met.

Northern Ireland next play Estonia in Tallinn on June 8. Belarus will host Germany in their third Euro 2020 qualifier on the same day.