Cristiano Ronaldo scored his 700th career goal during Portugal's 2-1 defeat to Ukraine on Monday - but how did he reach the staggering milestone?

Ronaldo reached the sensational milestone with a clinical penalty but he and his team-mates were unable to find an equaliser against the 10 men of Ukraine. 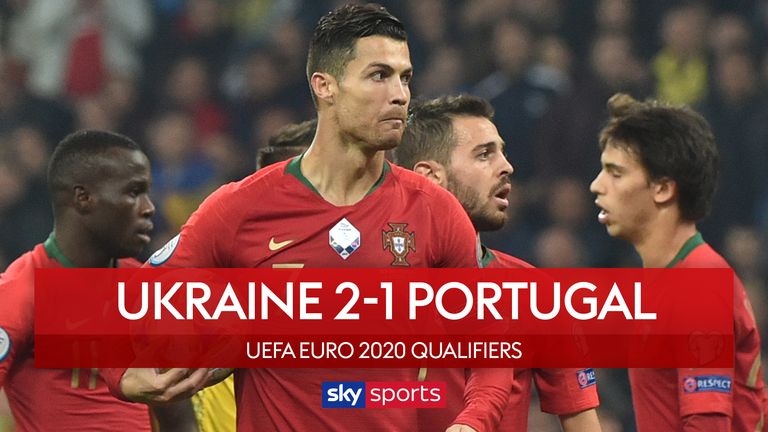 Highlights of the European Qualifying Group B match between Ukraine and Portugal.

The 34-year-old has scored more career goals than any other active player in professional football, edging the 672 amassed by his former La Liga adversary Lionel Messi.

"The records come naturally, I don't look for them, the records look for me," he told reporters after scoring another milestone goal.

"It's not for anyone to reach this number and I thank everyone, team-mates, colleagues, coaches and everyone who helped Cristiano become the player that he is.

"It's a nice moment in my career but there was a bitter taste because we didn't win."

This season, Ronaldo has scored 11 goals from 12 appearances for club and country, having scored four for Portugal during a 5-1 win over Lithuania in the European Qualifiers last month.

Incredibly, he scored in excess of 50 goals for eight successive seasons between 2010/11 and 2017/18, before netting 31 last term after his summer switch from Real Madrid to Juventus.

His most stellar season for goals came in 2011/12 with a career-topping 69, lifting the Liga trophy and reaching the Champions League semi-finals with Real, and helping Portugal reach the semi-finals in Euro 2012.

In fact, the Juventus forward has now scored 95 goals for his country, just 23 fewer than his tally for Manchester United over six seasons under Sir Alex Ferguson.

But the bulk of his incredible haul came after his £80m move from Old Trafford in 2009, when he proceeded to score 450 goals in a Madrid shirt during a nine-year spell at the club.

Ronaldo has found the back of net with 55 direct free-kicks - more than the 50 he's scored from outside the box in open play.

In addition to being lethal from range, the five-time Ballon d'Or winner poses equal threat in the air from closer range with 127 headed goals to date - just two shy of the number he's scored with his left boot.