Watch Cardiff City vs Swansea City on Sky Sports Football from 11.30am on Sunday (kick-off 12pm)

Liverpool forward Rhian Brewster has joined Swansea City on loan until the end of the season.

The Sky Bet Championship club were among a number of teams chasing the 19-year-old England U21 international after Liverpool made him available for a loan deal.

Aston Villa were thought to be interested, but Swansea have won the race to loan Brewster, who will embark on his first spell away from Liverpool.

Sky Sports News reported last week that Swansea believed their chances of signing Brewster were boosted because he played under Swans boss Steve Cooper in the England U17 set-up which won the World Cup in 2017.

"I'm very, very excited to be part of this," Brewster told the club, who are currently sixth in the Championship table and face rivals Cardiff City on Sunday lunchtime - live on Sky Sports Football.

"I couldn't wait to get here and get started, to be honest. I've been watching the results and the team closely. It's a very young team but the quality is second to none. I want to bring something different to the team and help them.

"I've come here to try and play a lot of games and score a lot of goals for Swansea.

"It's a great club. I've been watching them for ages - particularly when they were in the Premier League. Hopefully, I can help them get back to where they belong.

"At this moment in time, Swansea is the best team for me to join on loan. I want to help Swansea get promoted." 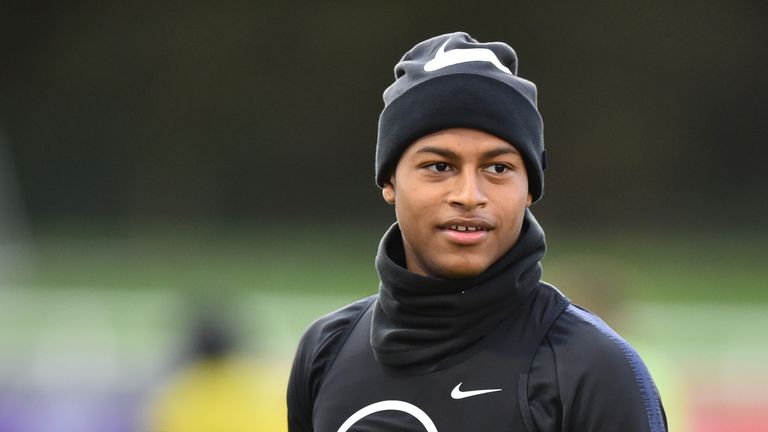 I've come here to try and play a lot of games and score a lot of goals for Swansea. Hopefully, I can help them get back to where they belong.

Brewster signed his first five-year professional deal with Liverpool in July 2018, but persistent ankle problems have hindered his development since winning the Golden Boot during England's U17 triumph three years ago.

He returned to first-team training in time to feature on the bench for Liverpool's Champions League semi-final, second-leg victory over Barcelona last year, and was once more among the substitutes when the Reds beat Tottenham 2-0 in the final.

This season, Brewster has started twice in the EFL Cup for Liverpool, but predominantly featured for the U23 side.

He made the Premier League matchday squad just once - remaining on the bench at Chelsea in September - and played the final 10 minutes of Liverpool's FA Cup win over Everton on Sunday.