In part two of the series, Sky Sports' Voice of Football takes us on a virtual visit to Aston Villa's Villa Park, as he recalls an FA Cup classic in one of the country's most historic venues.

Martin has also recorded some of his much-loved Tyler's Teasers videos from his home. Hit play for a tricky question about Jack Grealish and then scroll to the bottom of the page when you want to know the answers...

Villa Park: How I get there

By car. The large club car park allows most of the TV crew to park close to the broadcasting trucks, which is very convenient. Aston is also just off the motorway south of Spaghetti Junction, so it is a very drive-able journey

Villa Park is one of the few current grounds where I have commentated from both sides, level with the half-way line (Chelsea, Blackburn and Middlesbrough are among the others).

In the early Premier League years, we were based in the Trinity Road Stand, close to the directors box, with the off-centre players' tunnel down to our left. Sky Sports were regular attendees too. Remember that in the first Premier League season, Villa finished second to Manchester United. 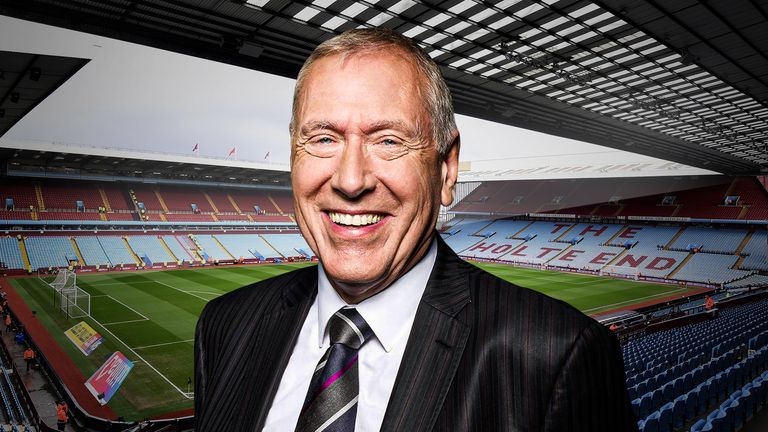 Now there are two commentary areas opposite in the Doug Ellis Stand. One is specifically for the company which is broadcasting the game, Sky, BBC or BT, and is set in among the supporters, which certainly adds to the atmosphere.

The other regularly used by the large number of foreign broadcasters is at the top of the main structure and runs the whole length of the stand. Unlike the lower position it is very roomy. Both afford excellent views of the football below.

Aston Villa's return to the Premier League has been good for Sky Sports. Both Villa and Newcastle were relegated in 2016 and for the following season our Premier League viewing figures dipped but the EFL numbers went up. The presence of both back in elite league have helped in a big increase in interest in this campaign.

My most notable memory of Villa Park

I'll never forget the sight of Ryan Giggs deciding what we knew then was the very last FA Cup semi-final replay.

For decades Villa Park was a major neutral venue at that stage of the competition. In 1999 the Manchester United vs Arsenal rivalry was at its height. The action was epic and the winning goal unforgettable.

A much more recent memory is also a treasured one. I was on duty for Sky Sports at Wembley for the Carabao Cup Final between Aston Villa and Manchester City. As part of my research for my commentary I asked for permission to visit the Villa training ground a couple of days before the match.

This is not access that clubs have to provide but Dean Smith and his staff could not have been more helpful. I was very grateful for the background information they gave me which was invaluable on the big occasion.

Every time I visit Villa Park I think of the National Trust as much as the Premier League. The home of Aston Villa is stately indeed. The architecture is splendid and the atmosphere from the Holte End can take your breath away.

If the league can resume as we all hope, Villa Park may well hold the key to a revival which is needed for survival. Six of the last 10 scheduled games are at home.

On Wednesday: Martin brings us his guide to Bournemouth's Vitality Stadium.