Graham Potter interview: Brighton boss on his development abroad and plans for the Seagulls

Graham Potter has transformed Brighton's style of play. But his first season in the Premier League has been a tough next step in his development as a coach too...

He took an unusual path to the Premier League and his first season hasn't always gone to plan.

Without a win in 2020, Brighton slipped to just two points above the relegation zone when football was suspended due to coronavirus. Their good work in the first half of the campaign was threatening to come undone. But Potter is relishing the task of a long-term project on the south coast.

"I've found it challenging. I've found it enjoyable," he says of his first taste of England's top flight, having progressed as a coach through a seven-season spell at Swedish club Ostersunds and a year with Swansea in the Championship.

"You can appreciate, there's a responsibility in the Premier League and you also realise that I'm very lucky and privileged to be here as well. I'm sure there's a lot of coaches out there in the world who would swap position with me.

"It's, as you'd expect, challenging, hard, ups and downs. But it's been exciting.

"There's a lot of work to do, we know that. We've made some steps. We've introduced young players into the group, we've changed the dynamic a little bit. We're at the start of that process. Clearly we need to carry on. That's where the work is now."

Chris Hughton's sacking at the end of last season, after steering Brighton to Premier League survival despite a dreadful second half to the 2018/19 campaign, sparked debate.

But when Brighton chairman Tony Bloom highlighted Potter's "excellent record of developing teams with an attractive playing style" upon his arrival, it was clear the club were intent on a change in direction.

The transformation in their play has been stark.

"We always look at the players we've got, firstly," says Potter, as he explains the thinking behind a dramatic shift from the direct approach under Hughton to his own more patient, passing style. "You have to look at the quality of player you have. We've tried to use them as well as we can.

The stats underline a huge shift in the areas Potter picks out.

Opta have an advanced metric measuring the number of 'build-up attacks' a Premier League team makes. That's the number of times they put a string of 10 passes together or more which ends up with a shot or touch in the opposition box.

Potter has taken Brighton from making the second fewest build-up attacks last season to seventh in this campaign. 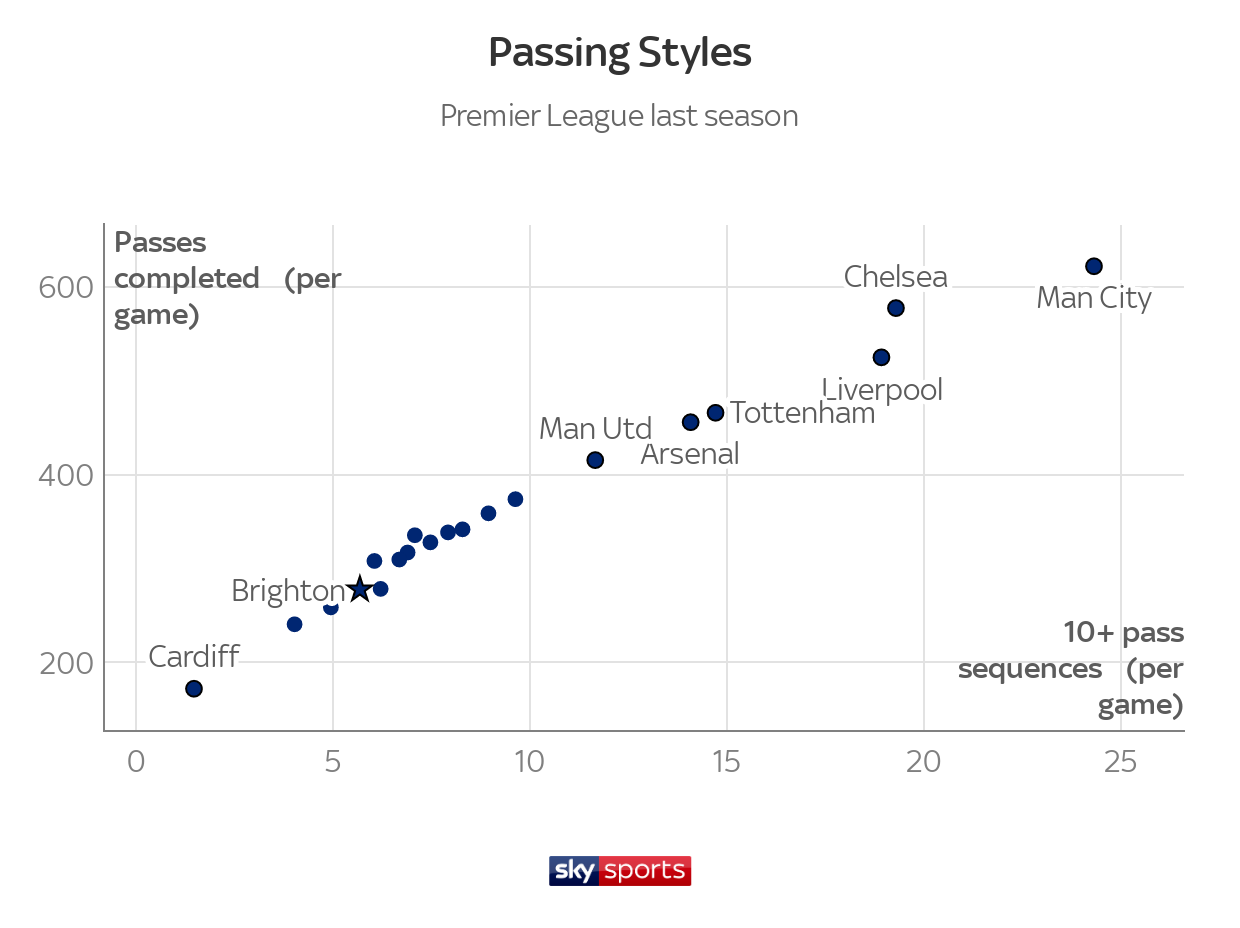 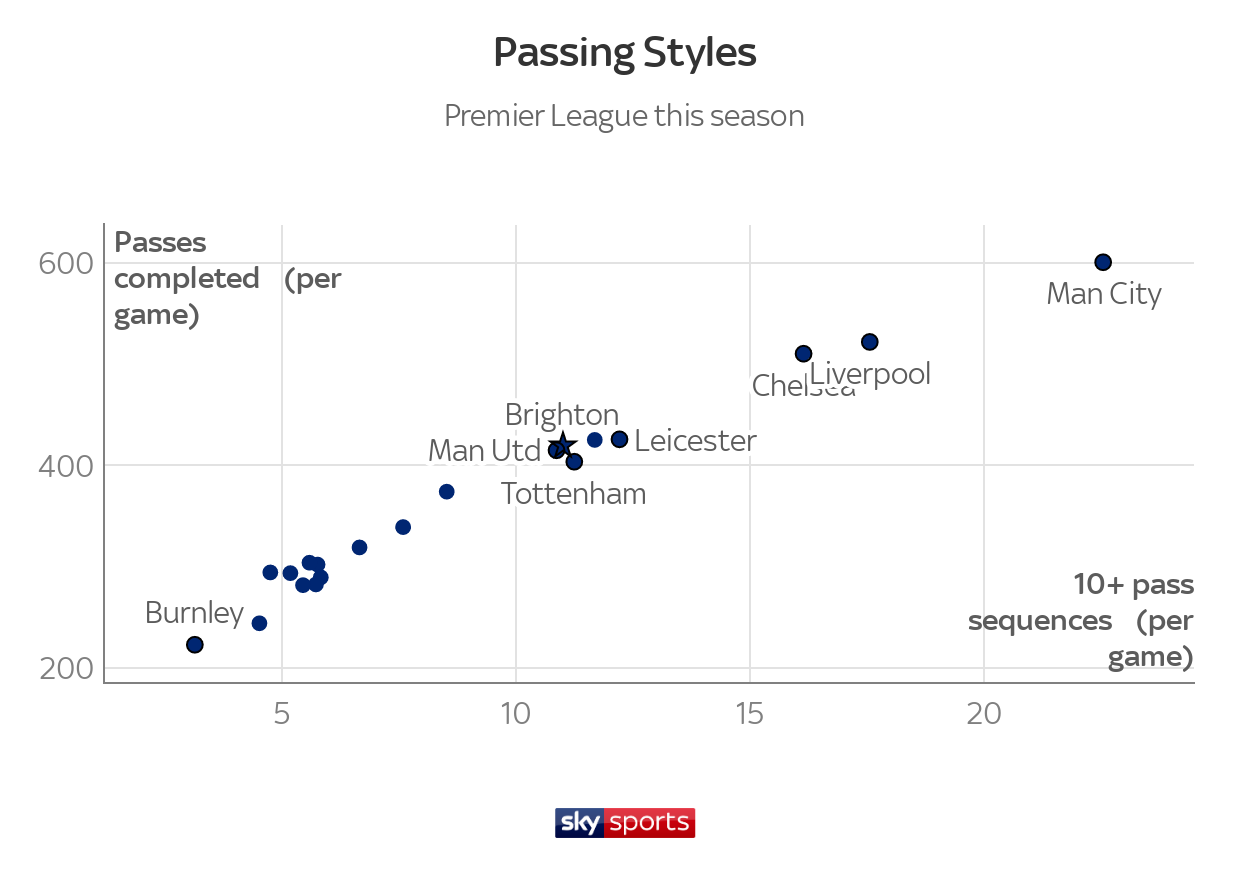 And without the ball? Brighton now press like a team at the top end of the table.

Another advanced metric is passes allowed per defensive action. Brighton have shot up from the third-lowest figure in the Premier League under Hughton to the fourth-best under Potter.

Of course, critics will say that's all well and good but Brighton currently sit exactly the same number of points above the relegation zone as they did when they sacked Hughton.

Hughton failed to win any of his last nine. So has Potter.

But Potter is quick to point out that this is just the start of Brighton's next steps under him. And it will take time.

"I think every manager has the responsibility to try to play football how they want to play football," he said. "And I've always said, that's the subjective choice. No one is saying that's the best way or the only way or my way is better than anyone else's. It's not at all.

"We're all trying to do the same thing in terms of trying to win football matches and get points. How we do it is the subjective bit. It's our choices and as a manager or head coach that's what you're here for. There's no point coming in and doing exactly the same, that doesn't make any sense.

"Chris had done a great job here. It wasn't like everything has to go. Of course not. You have to build on what was already here, which was a lot of good stuff. Then you have to try to put your own ideas and your own thoughts in to create something you can go forward with over a longer term.

"The style in itself is essentially insignificant, it's more how well you do it. But the main thing is we know we've got a lot to do as well. We're not thinking about anything other than the nine games we've got to play, because clearly that defines the season. That's our focus and what we need to think about."

Brighton would be in a far more comfortable position if they'd been able to turn some of their 11 draws into victories this season and Potter says Brighton must improve "in both boxes" to do that.

"That's the exciting bit, that's the challenging bit and that's where our work is," he says.

Potter also believes his experience as a manager gives him the attributes to find ways to make those differences.

Recently on The Football Show, Sky Sports pundits Graeme Souness and Gary Neville encouraged young coaches to go and manage abroad. Potter says the years he had working outside the UK were invaluable. 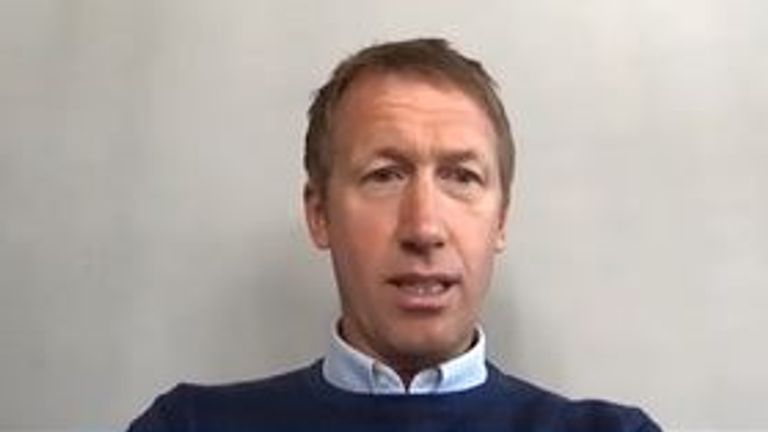 If people have the opportunity to [coach abroad] then of course I would recommend it wholeheartedly. It's the best thing I've done in my life so far

"I agree with Gary and Graeme. If people have the opportunity to do it then of course I would recommend it whole-heartedly," he said. "It's the best thing I've done in my life so far.

"You leave this country, you have your truth, your beliefs based on being here. And it's nice to go somewhere else where maybe it's not quite the same, different perspectives, different ways of looking at the world, which I found fascinating. And that allows you to grow as a person and it gives you experiences on the pitch as well.

"It's nice to come out of your comfort zone, away from the surroundings that are familiar to you and if people have the opportunity then absolutely, if the family can do it and support it, because that's also a part to it you have to consider, then, yes, it's a fantastic experience and for me it was a wonderful time in my life."

As well as new experiences, the move also gave Potter the chance to develop as a coach at a steady pace, away from the spotlight, as he took Ostersunds from the fourth tier of Swedish football to the top division and into the Europa League, where they scored a memorable win over Arsenal at the Emirates in 2018.

"I had seven years in Sweden and that's seven years of experience, seven years of going step-by-step at a football club," he said. "So I think going at the right speed, learning aspects of the job as it progresses and things change but you learn, you can make mistakes, you're not too out of your depth initially. I think it was good for me, good for my personality.

"And then the step back into the UK to Swansea is another year. You familiarise yourself again with football in the UK. All these experiences - as long as you've got the understanding of what's actually happening - that combination can give you the tools and the chance to succeed.

"But still, it's football and we know it's so competitive, the league is so ferocious. But in the end I've had eight to 10 years of management experience before you take a management position in the Premier League."

If the Premier League restarts, the next nine games will be crucial for Brighton and Potter - and their evolution together as club and coach.