Williams, who has fallen out of Neville's consideration for selection, says the England Women head coach's comments were "not needed" and "hurt" Fara Williams says Phil Neville showed 'a lack of respect' towards women's football, after he admitted that the England women's job was just 'a stepping stone'.

England's record appearance-maker Fara Williams says Phil Neville demonstrated "a lack of respect" towards the women's game, after the national coach described the role as a stepping stone to club management.

The Football Association confirmed in April the former Manchester United and Everton player will leave his role with the Lionesses when his contract expires, in July 2021, shortly before the rescheduled Olympic Games.

Neville, who was due to lead hosts England at the European Championships next summer prior to its postponement to 2022 as a consequence of the coronavirus pandemic, revealed last week he always intended to use the position to gain experience and then "cut his teeth" at a club.

"My plan was always just to go for the three years and then get into the day-to-day running of a club job, which would be what I wanted to do," Neville told beIN Sports' Keys & Gray Show.

"It's been brilliant and I've loved every minute of it, but ultimately you don't get to see the players. You don't get to impact them every single day, which is now what I feel I need to do.

"The plan was always to do the three years. I had a World Cup, I had the Olympics - which [would have been] this summer - and then there's the Euros in England next summer. That was my three-year stint at international football."

Williams, who has won 172 international caps, missed out on selection at last summer's World Cup in France and this year's SheBelieves Cup and admits she was "hurt" by Neville's remarks.

Speaking to Sky Sports News, Reading midfielder Williams said: "The comments… I was disappointed with [them]. The fact that you can come out and say you was using our national team as a stepping stone, that disappointed me. Former England Women manager Hope Powell says she would like Phil Neville's replacement to be a female with experience in the women's game.

"Comments like that are not needed in my opinion. I think he could have probably handled that, or the comments could have been made a little bit better.

"I just think it shows a little lack of respect for our game and, as I say, where it was and where we are trying to get it to." 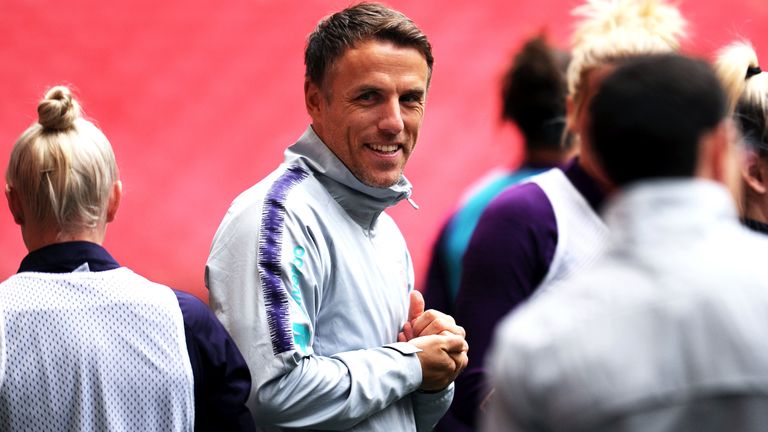 The Sunday Supplement panel discussed whether it is imperative that a woman is named as the next England women coach and what legacy Phil Neville will have.

Neville will be part of a team advising the FA on potential candidates for his successor, with former USA Women World Cup-winning head coach Jill Ellis and Manchester United Women manager Casey Stoney both seen as contenders for the position.