Injury has sidelined OL Reign and Wales' Jess Fishlock for a year but her spirit remains strong. She talks to Sky Sports about her life story and why she's supporting a new animated football film

As a Welsh caps centurion with an impressive array of club medals, Jess Fishlock has long been considered one of the game's great warriors.

For the last year, she's been battling her way back from a severe knee injury that left her wondering whether she should quit the game altogether. However, at the age of 33, she refused to concede defeat and now hopes to return to NWSL action with OL Reign this summer.

Tweet your questions below and watch on Sky Sports Football from 9am on Sunday 👇 pic.twitter.com/esOW5msKSA

Her resilience was forged back home in Cardiff and bolstered over the course of a career that's taken in titles and honours in the Netherlands, Australia, the US, Germany and France. It's a quality that can't be taught - but Fishlock believes strongly that it can be unlocked.

"You have a shield and as you start to grow, that shield gets stronger - and then the outer world really doesn't affect you," she tells Sky Sports from Utah, where the one-off, eight-team NWSL Challenge Cup tournament is being played.

Fishlock sustained a minor calf strain last week - "it's annoying more than anything" - and is keeping the bigger picture in mind, with Wales' Euro qualifying campaign due to resume in September.

In the last few weeks, she has been reflecting on fortitude, family, and freedom, having made a new short documentary charting her own journey in support of an animated film about a kids' football team.

Fishlock was initially invited to view the 'Game Changer' cartoon last year and quickly became a vocal advocate for its powerful message of acceptance and respect. "I love this film. I remember watching it for the first time and thinking 'God, I wish I'd seen this in school, I really do', and that's when I realised just how strongly I felt about its importance." 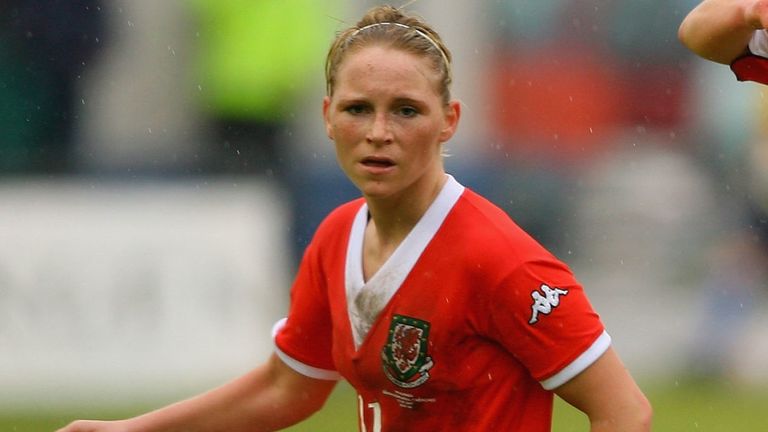 Football was the one place I could always go and be myself. I was happy and supported there

Jess Fishlock on growing up gay

This particular soccer story follows the latest adventure of a team of globe-trotting orphans. Captained by LaGolda - the animated series is also named after her - the children combine a love of the game with a passion for learning about the world around them. In each episode, they encounter a new challenge that's connected to a social issue. Working together, the kids take an entertaining and educational approach to tackling the problem, making new friends along the way.

In 'Game Changer', LaGolda and her team meet another young girl, an 11-year-old called Ryan with attacking talent who is being bullied by her schoolmates after telling them she's gay. Fishlock was around the same age when she knew she was different, although back in the late 1990s, she wasn't yet able to articulate it in the same way. A couple of years later, in her Cardiff high school, she started getting bullied, as other pupils prejudged her based on her tomboy appearance and love of football.

She has previously described this time in her life as "hell on earth" and says knowing next to nothing about sexual orientation - with the curriculum failing to offer any sort of explanation - only made it worse. "I didn't have a level of understanding really until I was 16 or 17," she says. "I'd gone from 12 to that point mostly feeling that there was something wrong with me, and having no one to go and speak to about it. I didn't see anything regarding LGBTQ apart from suggestions it was wrong or that it needed treatment, or something stupid like that."

Recalling the confusion of her early teenage years, Fishlock sought reassurances from her sister - a teacher - about how 'Game Changer' was pitched. "I said to her, 'just let me know what you think - is it too strong?' I really liked the message, but I don't deal with kids. But my sister came back and said that she felt the language was great, and that it was a strong message but it wasn't forceful. That was just what I wanted to hear. As soon as I got that from her, I said this is something that I really want to be a part of because it's important."

'Best bit of my MBE was the LGBT+ part'

School environments and syllabuses may have changed considerably in the last 20 years, but many LGBT+ young people are still suffering in the UK. A YouGov poll conducted last December found that homophobic bullying was more prevalent than other forms of discrimination among pupils and that 75 per cent of teachers had witnessed it in some form. LGBT+-inclusive relationships and sex education will become mandatory from September, but the same survey found a quarter of respondents said children should not learn about gay relationships in school, with 16 per cent unsure.

Fishlock thinks the question is a no-brainer. "Your education should obviously be about English, maths and science, but it should also be about what has shaped the world and humanity. LGBTQ history is that, black lives history is that - they're prominent right now but we as people should have had the right to learn about them years ago.

"We've never really had anyone be brave enough to have that conversation before, but now we are finding those people. We've also found an amazing animated film that gets the message across without forcing it. That's what's so beautiful about it."

MY FAV TIME OF EVERY SINGLE YEAR. #PRIDE2020

This year is a little different for us all, but, fighting & supporting equal rights never changes. #LoveIsLove #TransLivesMatter #BlackLivesMattters https://t.co/BhExrEN2Pb

She released her own documentary short on Tuesday, the last day of Pride month - the video was shared socially by her club and her country, who both switched up their logos into rainbow colours. The symbolism of the Pride flag is discussed by the characters in 'Game Changer' as part of the storyline.

"They do a great job of bringing the flag into the conversation naturally and then the meaning of it. That's just another one of the subtle messages but a very powerful one."

Simple explanations such as this benefit not just children but their parents too, particularly in the context of how the rainbow flag differs from recent displays of appreciation across the UK for the NHS. Fishlock was particularly pleased to see the Wales FA change their badge in June. "It's great. People sometimes say to me that companies and brands just do it as a stunt or because they have to. I get that, but I don't really care - 10 years ago they wouldn't have done it, not even as a stunt. Now they're thinking, 'send out that message, send it out!' - so that's already a massive shift."

A year-and-a-half ago, Britain's appreciation for Fishlock herself was marked when she collected an MBE from Prince Charles. Images from that special day at Buckingham Palace feature in her film, with brother Gareth describing how the family turned up hours early to secure the best possible seats. The award was for services to football and to the LGBT+ community. "The best thing for me was actually the LGBTQ part - my family knew that's why I was so emotional about it. People who just know football would maybe not understand that, and that's fine."

She is grateful to Gareth for his contribution to her film. Born only 11 months apart, they have had a strong bond since childhood. "We caused carnage," laughs Fishlock. "Our poor mother... Gareth has always been my guy, we're so close. When I asked him to do it, he said 'absolutely, I would love to be a part of your story'. He did a great job, very eloquent - although he had a buzzcut right before which I wasn't happy about, but what can you do?"

There are still ambitions to bring further pride to her family and her country by helping Wales reach a major tournament. In September, qualifying resumes for Euro 2021 (the finals in England have been shunted to summer 2022) with an away game against Norway, who are perfect in Group C having scored 32 goals in four games and conceded just one. The return match is in October. "We're unbeaten too but it's a bit deceiving," admits Fishlock. "Drawing games [home and away to Northern Ireland] is not ideal as a second seed.

"I have faith in our team although there's no point hiding the fact that these are going to be very difficult games for us against Norway. But the pandemic has made it a little more of a level playing field - many of their girls are not playing at the moment. They just have to train like us." A route through the play-offs looks likely but not before Fishlock - fitness permitting - and her Wales team-mates have given it their all against the World Cup quarter-finalists.

Last year's tournament in France felt like a landmark moment for LGBT+ visibility in sports, with around 40 out players and further representation provided by coaching staff, media and fans. The women's game has always felt inclusive for Fishlock. "Football was the one place I could always go and be myself," she says. "I was happy and supported there. When I'd come out of football, I hit this wall of hostility."

She fears it's the opposite case for gay and bi players in the men's game. "My heart hurts for anyone who has to lie. As somebody who did that for a long time, I can't tell you how horrible that is. I don't care how much they earn - there's no amount of money in the world that can make anything feel better when you have to live a lie.

"But I would never put any pressure on anybody coming out. The men's game especially is so hostile. If someone did feel like they were brave enough to take that on, then the amount of support they would need and the thick skin and strength would be unreal. I hope that one day someone feels like that, but I completely understand why it doesn't happen."

For Fishlock, it all comes back to education and she's keen to see where LaGolda goes next, with the 'Game Changer' episode having recently been added to the Football v Homophobia campaign's resources in the UK. As a way to introduce inclusion and as a tool to avert bullying, it's a win-win for teachers; for a real-life Ryan, it could provide the inspiration they need to be themselves.

"When you can say, this is how I'm feeling - even if you don't want to label it - the outer world doesn't hit you quite as hard," says Fishlock. It's the start of the defence mechanism she mentioned earlier; the shield of self-confidence you need for success, in football or any walk of life.

Now she's pushing back. "I feel like, 'hey world, you came at me for so long and it's my turn to come at you!' Let's make it better. That's what happens when you understand that there's absolutely nothing wrong with you at all. As soon as you know that, you get a secret little superpower."

Jess Fishlock will be the special guest on The Women's Football Show on Sunday - watch live on Sky Sports Football from 9am.