Wycombe striker Adebayo Akinfenwa tells Sky Sports about the abhorrent racist abuse he suffered while playing professional football in Lithuania as a teenager; Akinfenwa moved after being let go by Watford 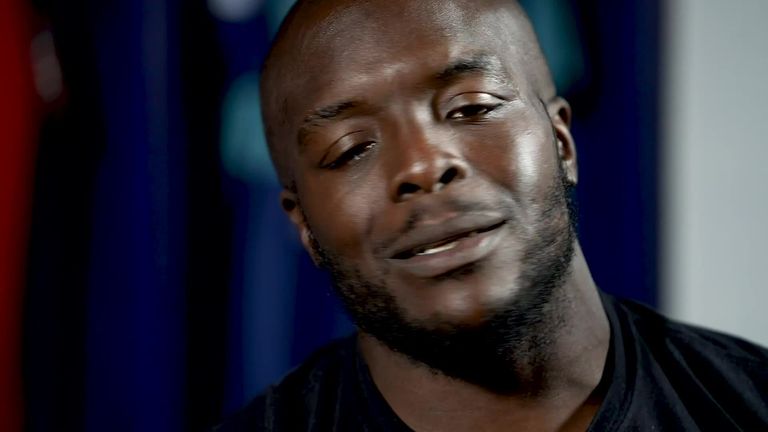 In his words, Adebayo Akinfenwa powerfully recalls the harrowing racist abuse he suffered while playing football in Lithuania

When Adebayo Akinfenwa was released by Watford in 2001, his footballing career stood at a crossroads.

With interest from clubs in England not forthcoming, a chance move to Lithuanian football offered the then-18-year-old an opportunity to continue his development. It was one he took with both hands.

What happened next completely blindsided the teenager straight out of multicultural London; overt, explicit racist abuse and hostility.

Here, in his words, Akinfenwa powerfully recalls his ordeal in Lithuania, how he came out the other side and how it shaped him into the person he is today...

'I just wanted to play football'

This situation in Lithuania came about when I was 17, 18. I'd just been released from Watford and my agent at the time was married to a Lithuanian woman.

The president of a club in Lithuania - FK Atlantas - came to watch one of my games at Watford. After I got released, he approached my agent.

It was sold to me that they played UEFA Cup football, but I'd never even heard of the country of Lithuania.

When you're young, you're fearless, I didn't take into account that I didn't speak the language, that I didn't like the food, or the colour of my skin - I just wanted to play football.

We kicked off and I went out to the wing, so we could play diagonal. I chested the ball down, went down the line and straight away heard monkey chants. In my head I thought that couldn't be. Then, when I got the ball again, monkey chants. The second time I definitely knew it was monkey chants.

I stopped and looked around and was like, 'what?'. And then what made it worse, of the 1000 people singing it, 500 were from the away team and 500 were my own team. The away fans started it, and then the home fans - my home fans - joined in.

I got through to half-time. My team captain played in Poland, so he spoke a bit of English, but everyone else, even the manager, only spoke Lithuanian, so I didn't have a clue what they were saying.

I was sitting there steaming and asked the captain what 'ziga, ziga' meant, and he nonchalantly said it was nothing, they just rhymed it with the n-word.

The second half came, and they started doing again, so I signalled to the manager I was coming off. As I came off there was a massive roar.

'It still crumbles me to this day'

As I came off, I took the president's phone and called my older brother. This was 20 years ago, but I remember it like it was yesterday.

I told him I was coming home, he asked me what happened, and I told him they were being racist. He said he wouldn't tell me to stay anywhere I didn't feel comfortable, but if I left, they would win. That was all he said.

It was funny because I would like to say it was like a film, and music started playing and I went to go and beat them, but as soon as I came off the phone I still wanted to go home. I didn't care, they could win.

I went to bed that night - call it divine intervention, God speaking to me - but I woke up thinking nobody was going to kick me out of anywhere.

The thing that disappointed me was that I allowed them to make me come off that pitch in the second half, it still crumbles me to this day.

Some people will say it wasn't weakness but for me it was weakness. I get I was young and that hadn't gone through those experiences.

'Nobody should get used to uneasiness like I did'

What I went on to learn was that I was the first black person in the entire league, one of maybe 10 black people in the city of Klaipeda.

A month into my stay, my girlfriend at the time and my brother, who was 14, came shopping with me and the whole place shut down as three black people entered.

To this day, brother still tells me how uneasy he felt, but I had got so used to the uneasiness, which should never be the case. You should never get used to that, but I did.

'People are very scared of what they don't know'

I scored goals, we got to the equivalent of the FA Cup final, FK Atlantas hadn't won a cup in 11 years, we won it 1-0 and I scored the goal.

Among my own fans I wouldn't say I was a legend, but I was the guy who brought a trophy and they stopped saying racist abuse. They stopped because of what I did on the pitch, not because they knew me, so that showed me a level of ignorance.

How can you accept someone because they are scoring goals for you, but totally dislike them because of the colour of their skin? They didn't know me either way, so for me it was a lot of ignorance and fear of the unknown.

They hadn't seen a black person close up, so whatever had been drummed into them was what they were saying, but because I was scoring goals and bringing joy to their team, they looked past the colour of my skin.

A lot of ignorance came into play and what I took from the whole ordeal was that some people are very scared of what they don't know.

There's unconscious bias and then there's overt racism, and this was blatant right in my face. There was no sugar-coating it, there was racism and I had to deal with it.

It's a mindset. I was young, fearless and went through things I never thought I would have to. This was 20 years ago, I had to go to the internet café to use MSN Messenger or buy phonecards to phone home, so I was isolated when I went through it.

I wouldn't say I would ever do it again, or want to do it again, but in a roundabout way I'm glad I went through it because it shaped me into the person I am today.

I think we've all got a story to tell, an autobiography. This was part of mine. Celebrate is the wrong word but I think you should embrace your trials and tribulations, your challenges, and I have never had a problem talking about this.

Sometimes when you're going through your darkest times, that shapes you for your light moments.