In an exclusive interview, Ole Gunnar Solskjaer challenges the narrative that his Manchester United side are inconsistent and explains how new signings are helping them evolve. Watch West Ham vs Man Utd live on Sky Sports Premier League HD from 5pm on Saturday; Kick-off is 5.30pm

"I'm getting excited here," Ole Gunnar Solskjaer tells Sky Sports with a grin. It is less than 48 hours since the 3-1 loss to Paris Saint-Germain which left Manchester United's Champions League hopes in the balance. But the manager's positive outlook remains.

His excitement, he explains, is down to the options he now has at his disposal and the improvements he is seeing in the way his side are playing. It has been a stuttering start to the campaign. The PSG defeat was not the first setback and it may yet prove costly. But he is adamant that United are on an upward trajectory.

"You're always looking for ways of improving and we know we still have a lot to improve on," he says. "But I feel we have made some decisions that have benefitted us as a team and a club. Some of the signings we have made have come in and had a great influence.

"As a manager, you are never 100 per cent happy. You always want more and you always know that the demands and the standards here at Manchester United are the highest - as they should be. Of course, it's only at the end of the season that you know how well you have done. But we are moving up the table and playing better."

Manchester United sit ninth as it stands - still a long way from where they want to be - but they head to the London Stadium to face West Ham on Saturday knowing a fourth consecutive Premier League victory could lift them back into the European places with a game in hand still to come.

"I know the narrative is that we're really inconsistent and I'm not one to argue too much, but if you look back from when the lockdown started or even from the end of the January transfer window, I think we're one of the most consistent teams in the country," says Solskjaer.

"Of course, the Tottenham defeat was made into a big thing, but we were 10 men, having had no pre-season."

That 6-1 thrashing by Spurs is unlikely to be forgotten any time soon but Solskjaer's comments do stand up to scrutiny.

Since the end of the January transfer window, only Liverpool have taken more points than Manchester United in the Premier League. Go back to the start of his reign two years ago and they sit third.

"Liverpool and Manchester City have been exceptional over the last two years, but they are still two sides too many ahead of us, in my head anyway, because I want us to be the best. Saying that, we have made real strides. The lows are not so low anymore, but the highs can be really high. It shows we are on the right track."

Solskjaer's side have been accused of being one-dimensional over the last two years. Stop their counter-attack and you stop them. But from Bruno Fernandes to Edinson Cavani, every new signing over the last year has been brought in with evolution in mind.

Ed Woodward, the club's chief executive, promised further financial backing in future transfer windows during the latest fans' forum, and while the summer dealings were far from straightforward, Solskjaer insists he is already seeing the impact of the investment.

"Take the Southampton game last weekend, when we were two-nil down," he says. "You're not going to be able to play on the counter-attack against a team that's leading two-nil, but we managed to break them down through different types of attacks and different types of football.

"We've got some exceptional pace on the break and when we have to drop deep and defend, we know we can use that. But we want to be on the front foot. With Bruno coming it, we're managing to break teams down more often.

"After that, we added Donny [van de Beek], with his movement, his cleverness around the box and spatial awareness, which is brilliant for us, then there's Edinson, who can be in the box, and Alex [Telles] with his crossing. So, we're working on the style by trying to piece together a squad of players which gives us more ways to play.

"What's exciting is that these players can improve as well. Most of them are still in a phase of their careers where they can develop a lot."

Manchester United supporters will hope to see that development in action over the course of the campaign and Solskjaer insists his side are already improving off the ball as well as on it.

"I think we're getting better and better in our pressing," he says. "The coaches have done some fantastic sessions on that. It's about tactical work and fitness, but also attitude and being on the front foot.

"If you are able to press with the talent we have, then you know you are getting somewhere with the culture as well."

Last weekend's comeback against Southampton was the latest example of the team spirit that exists in Solskjaer's squad. They are not without their flaws, of course, some of which were in evidence at Old Trafford on Wednesday night. But since the start of last season, only Liverpool have won more points from losing positions.

"I've got certain values, values I look for in players, and one of them is to never give up," says Solskjaer, "even if you're two-nil down or five-nil down - or even two-nil up or five-nil up.

"I want players to be able to make the right decisions in those situations and we've got more and more who have that solidity and robustness to keep on going no matter what. The spirit is good. The players sense that we can move up the table and challenge for things this year."

There remain frailties in defence. United have conceded 16 goals in just nine Premier League games so far this season and they were carved open far too easily by PSG on Wednesday night, a game in which Solskjaer's decision-making was also called into question for opting not to substitute Fred before his sending off.

But the squad certainly looks deeper for the club's recent recruitment.

"I've got some great headaches and challenges every time I pick a squad - never mind a team," says Solskjaer.

"There are 20 who can travel, but you look at the names you have to leave out and that's hard. It's one of the worst things, as a manager, telling a player who you want the best for that he's not part of the squad or not in the starting line-up." 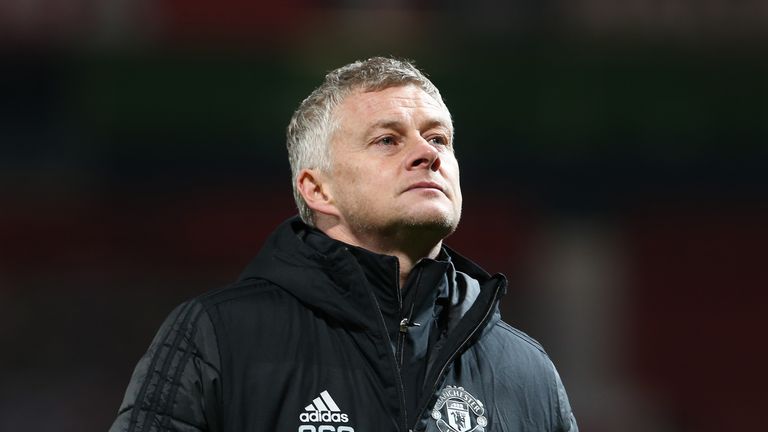 Ole Gunnar Solskjaer explains how his side have improved

That issue is most apparent in midfield. Solskjaer has chopped and changed this season but he is yet to find a way of accommodating Paul Pogba, Fernandes and Van de Beek all at once. It is something many supporters would love to see but Solskjaer must factor balance, as well as quality, into his thinking.

"Over a long season it might be that they get a run of games together," says Solskjaer. "It might be that we have a system that suits all of them together.

"But then you've got Nemanja [Matic], Scott [McTominay] and Fred, and the balance they can give you. It's difficult to see a team without at least one of them, because of that balance. All of them will play their part - it's just down to them to perform when they get their chances."

'Others must learn from Cavani'

That ability to maintain focus is something Solskjaer hopes his forwards will pick up from Cavani. The 33-year-old, who scored two goals and set up the other at St Mary's last weekend, was signed for his attitude as much as his ability, according to Solskjaer. He is seen as a mentor for Mason Greenwood, Marcus Rashford and Anthony Martial.

"I hope he will help them in many ways," says Solskjaer. "First of all, by the way he lives his life and the example he shows through being as professional as he is, in terms of how he has looked after himself throughout his career.

"But also on the pitch, of course. They've got to look at his movement and the way he plays as a centre forward, how he runs off shoulders, how he comes to feet, how he gets into the box to score goals.

"He's a different type to all three of them and he's got different qualities. But as a striker I always enjoyed learning from other players, whether it was Becks, Giggsy, Andy Cole or Ruud van Nistelrooy.

"What attributes do they have that I can get better at? How can I learn from them? Edinson is someone the others have to learn from."

Solskjaer, although eternally optimistic about the future, is aware of the criticism that will come his way if, following Wednesday's defeat to PSG, Manchester United do not navigate their next two assignments - against West Ham and RB Leipzig - successfully.

"I've been here so long so I feel I know everything there is to know about the pressure at Manchester United," he says, grinning again.

"Of course, when you are the one making the big decisions, it falls on you. But that's fine. I wouldn't have said yes to the club when they asked me to come if I didn't feel I was ready to make those decisions and take the consequences - either good or bad.

"I'm not too emotional one way or the other. Of course, it's unbelievable how much winning or losing can affect your mood. But how long do you let it affect your mood? I've always had a rule which is that if you're not going to be thinking about it in five years, don't spend more than five minutes on it now. Forget it and move on."