Edinson Cavani can have a big influence at Man Utd, says Tim Cahill

Tim Cahill believes Edinson Cavani "just needs service" to ply his predatory instincts and have a big influence on Manchester United this season.

The former Everton attacker was speaking on the Kings of the Premier League show, sponsored by Budweiser, which airs this Friday on Sky Sports Premier League at 7pm, where guests assemble their team of the month.

"He's a striker who can finish, but, at the same time, to come on [against Southampton], assist, score two goals and have the prowess Manchester United need - he pretty much turned that game on its head," said Cahill.

Kings Of The Premier League

"He's a big, influential player. He has instincts, but it's not always just [to get onto] the first ball, it's the second ball. Even when you see him score off a shot that was going off target, he was there to head it in.

"He's always proactive, not reactive, and onto things. I love seeing that glancing header because it's awkward, the timing of the run and the way he's glanced at it - he doesn't need to look at the goal because he knows where it is.

"But even earlier on, when he's had a few glimpses this season, you can see the danger [he poses] - now he just needs the service.

"The influence he has so quickly when he comes on, and you see defenders give him a little bit of room - even though he's older. I think it says a lot about his presence from what he's done before. He's a big, big influence on that team. 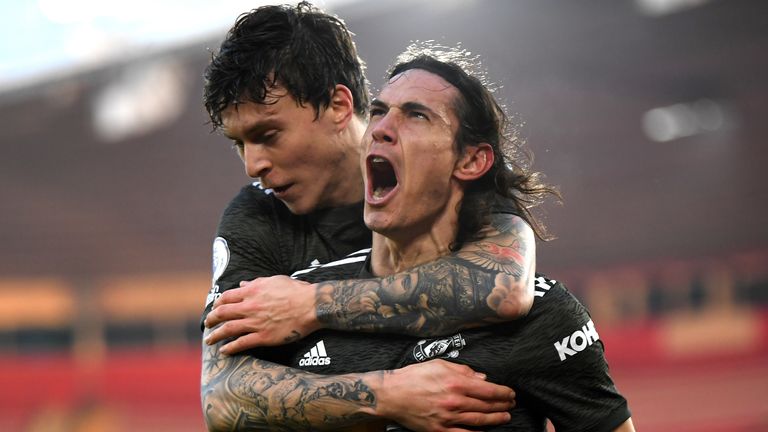 Speaking on MNF, Gary Neville analyses Edinson Cavani's movement saying he's one of the best in the world at near-post runs

Fellow guest, Wycombe striker and social media influencer Adebayo Akinfenwa, added: "Of course, he's played at high levels but [he has coped] with the pressure of whether he can come in and do it.

"People were asking, like with Ibra [Zlatan Ibrahimovic], will he be a hit or miss? But he's turned games around single-handedly. I've got to give it to him."

Speaking in a Q&A session after the show, Akinfenwa, now 38, revealed he is considering a move to Hashtag United in the future - a club founded by YouTube personality Spencer Owen in 2016 and now plays in the ninth tier of the football pyramid.

"I've still got some unfinished business at Wycombe and, as soon as I've finished that, me and Spence will sit down and talk. We'll have a conversation.

"Of course, prioritise Wycombe right now. We've got business in the Champ. Just in case you lot don't know, Wycombe are in the Champ! But after that, me and Spence will chat."

Akinfenwa and Cahill on KOTPL

The monthly Kings of the Premier League show returns on Sky Sports this Friday with another all-star line-up on the panel.

Sky Sports presenter Adam Smith and two guests build an ultimate XI from the top-performing players over the past month, armed with stats-based rankings and votes from the fans.

This month, Smithy is joined by Wycombe Wanderers striker and influencer Adebayo Akinfenwa - widely regarded as the world's strongest footballer - alongside Everton legend Tim Cahill, who appeared in four World Cups for Australia.

The pair will be pitting stats against gut, comparing results from the statistical Power Rankings with fans' votes for Kings of the Match on the Premier League website.

The guests disagreed on several selections before being forced into a decision and provided opinions on several of the hot talking points right now.

Do the Premier League's statistical leaders make the cut in this month's XI, or do the fans' favourites earn starting berths? Tune in to Sky Sports Premier League at 7pm on Friday to find out.

Southampton midfielder James Ward-Prowse reclaimed top spot in the form chart after another set-piece masterclass in the 3-2 defeat to Manchester United, teeing up Jan Bednarek from a corner and scoring an unstoppable free-kick.

Manchester City winger Riyad Mahrez shored up runner-up spot with a hat-trick during the 5-0 demolition over Burnley, while Jack Grealish (No 3) rejoined the elite performers with another stellar display in the 2-1 defeat to West Ham.

Bruno Fernandes slipped from the chart summit to No 4, despite scoring on the hour mark at St Mary's Stadium to reduce a two-goal deficit - before super-sub Edinson Cavani (No 7) nodded home twice to secure three points. 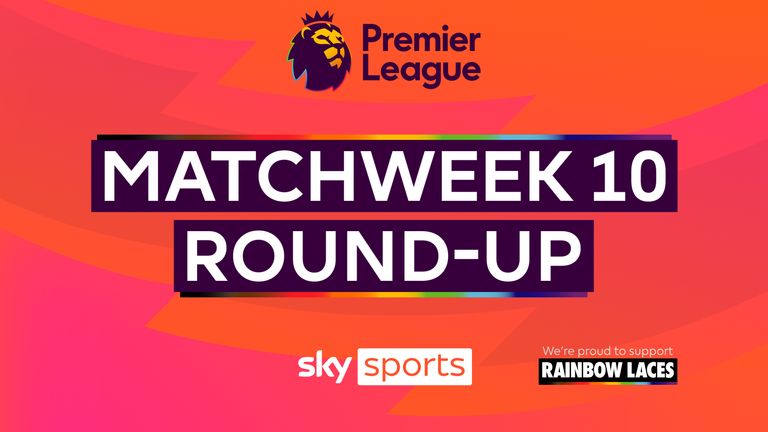 A round-up of all the games from matchweek ten in the Premier League.

Dominic Calvert-Lewin (No 8) tumbled five places after Everton suffered a 1-0 defeat to Leeds, while Wolves winger Pedro Neto (No 9) scored for the second game running in a 2-1 win over Arsenal - as did former team-mate and Liverpool forward Diogo Jota (No 10) in a 1-1 draw at Brighton.