Jose Mourinho: Tottenham don't fear anyone ahead of Chelsea clash 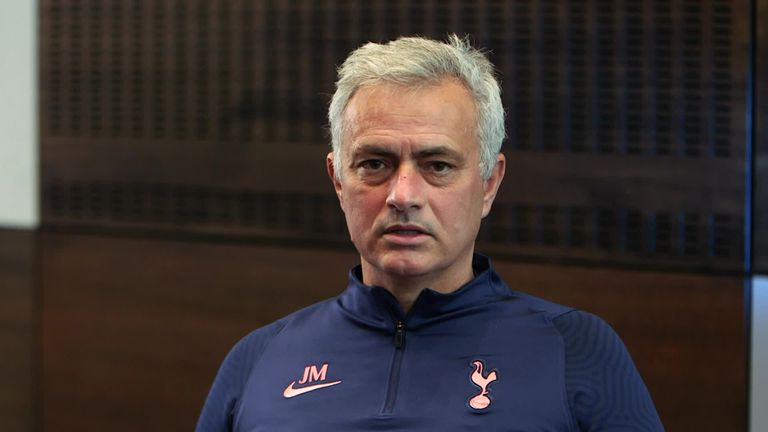 Tottenham go to Chelsea on Sunday afternoon, looking to retain their 100 per cent Premier League away record, and make it six wins in a row in all competitions.

Chelsea, of course, are in top form themselves. Victory for them would make it seven in a row.

Plenty, then, for both sides to fear? No, says Mourinho. Fear is not a word he recognises.

"You'll have to ask Frank if they fear us or not," he said. "But I don't think fear is the right word at this level. We don't fear anyone."

No fear. But certainly, respect.

"We respect their potential and I think they respect our potential. Honestly, I don't think they believe they are going to play an easy opponent," Mourinho said.

"I would love them to feel that way, but I don't think they do. Frank is a man with a lot of experience in football and I think they know we are a difficult team that is capable to go there and win."

Get all 8 Sky Sports for just £15 a month with our Black Friday half price offer.

'We can't do the crazy market'

Spurs are two points above Chelsea in the title race, despite Mourinho spending around £160m less than Lampard in the summer transfer window.

Mourinho knows only too well the spending power of Roman Abramovich, who will mark his 1,000 game as Chelsea owner on Sunday.

"We don't have the conditions, like some clubs, to do the crazy market," he said.

"We have to do the wise market, and we did it. We improved the team's potential," he added.

So, potential has improved, but by how much? Potential champions maybe?

"If potential is higher, the expectations are higher. But we are not focussed on the table. The table is something we are going to look at when the season is finished," he said.

If history is any guide, Spurs fans may well very much enjoy looking at the table at the end of the season.

Mourinho has won the league in his second season at every club he's managed, apart from Manchester United. They only managed runners-up.

Despite that impressive record, Mourinho is urging caution.

"I hope the fans look at us as a work in progress," he said. "The others normally need years and years until they achieve something. I don't think it's fair that expectations of us exceed reality."

'We are confident - the spirit is positive'

Mourinho though is prepared to admit that seeing Tottenham top the league, prior to Liverpool's draw with Brighton on Saturday, has boosted his players' confidence.

"We are confident because we work hard, but of course good results help you feel much better and give you more confidence to play better," he said.

Confidence is high and so is team spirit. Jose has a happy group.

"Spirit is positive," he said. "The players have a great relationship between them, myself and my staff. We try to be their bosses but at the same time integrate that spirit."

Sunday's game will be in an empty stadium, of course. But next weekend's north London Derby will be the first in front of fans at the Tottenham Hotspur Stadium since March.

Two thousand is a small start, says Mourinho, but very welcome none the less.

"Two thousand fans in a 60,000 stadium means the stadium will be almost empty, but better 2,000 than zero. It will be a nice moment for everyone who loves football."

Liverpool manager Jurgen Klopp has questioned the fairness of the announcement.

But Mourinho doesn't agree with him even though, Spurs play at Selhurst Park in a fortnight's time, which will be nearly a tenth full of Palace fans.

"I don't believe this is the time to be moaning or complaining about the situation. Just be happy with a little evolution. Ten is better than zero, so let's accept the way it is."

This week on the Pitch to Post Preview Podcast, Peter Smith is joined by Michael Bridge and Charlotte Marsh to look ahead to a blockbuster London derby between title hopefuls Chelsea and Tottenham, James Cooper explains how Bruno Fernandes has become Man Utd's leader, and we analyse Arsenal's creativity problems.