Premier League hits and misses: Where to start with Arsenal's issues? Plus: Liverpool show ruthless edge

Liverpool finally showed their ruthless edge. Plus: Why Dominic Calvert-Lewin sums up Carlo Ancelotti's new Everton, and where do you start with Arsenal's issues?

Arsenal... where do you start? There are so many problems with Mikel Arteta's side, it's hard to know where to start.

Their current plight is a crescendo of issues both in and out of Arteta's control. Unlucky in parts? Perhaps. Architects of their own downfall? Most definitely. Tactically unsure, shorn of leadership, and misplacing fight? Yes, yes and yes.

But at the most basic level, Arsenal's personnel are not only falling behind the Premier League's traditional top teams, but well behind the pack just below. Their squad is simply not good enough.

"They don't have enough good players, it doesn't matter who the manager is," said Graeme Souness, even before Arsenal had even kicked off in their latest disappointment.

Even if Arsenal do recover, string some performances together and finish mid-table, it's nowhere near acceptable. On Saturday, they looked like 11 moving parts, desperately trying not to be the fall guy.

Arteta assures us his team are still fighting, or in other words, have not downed tools on him and left the crumbling construction site. But on current form, things are likely to get worse before they get better. Next up it's Manchester City in the Carabao Cup, then Chelsea at the Emirates. Nobody is expecting Arsenal to get anything positive.

It's the following two games - at Brighton and West Brom - that look scarily important.
Gerard Brand

A year into his tenure, there's been a lot said of the progress Everton have made under Carlo Ancelotti.

But one of his biggest achievements has been the transformation of Dominic Calvert-Lewin. His improvement sums up Ancelotti's new Everton.

Calvert-Lewin's hold-up play allows Everton to sit back, soak and play the counter-attack, particularly without the likes of James Rodriguez. There are shades of Harry Kane in the way Calvert-Lewin holds up the ball with intelligence - and yes, holding up the ball is more a cognitive skill than you think. It's not simply about throwing your weight around.

The timing of his jumps, barges, and even when he wants to win a foul, are top level. His touch, and importantly, the weighted direction of his touch, take defenders out of the game, even when they are hanging off the back of him. And that's even before his quality of finish and aerial threat in front of goal.

It's cute and effective, and that's what Everton are now. Saturday was low ranking in their footballing performances this season, but that was necessary for three points. Previously, that game management and intelligence was absent.

They did the dirty work, and in this season of all seasons, that means more than an eye-catching performance.
Gerard Brand "I thought it was coming because over the last few weeks we haven't really been as ruthless in front of goal as we would have liked."

Jordan Henderson knows Liverpool have not quite been as clinical as we have come to expect in recent matches. Although Liverpool are unbeaten in nine, there have been 1-1 draws at Brighton and Fulham away, plus a lack of cutting edge in a dominant first half against Tottenham in midweek.

But like a volcano, the pressure of the lava finally erupted at Selhurst Park as Liverpool ran away to a spectacular 7-0 victory. As Jurgen Klopp said, his side 'obviously all wore their finishing boots', which was his explanation for the emphatic scoreline.

Liverpool scored 50 per cent of the shots they had (7/14), compared to just two of the 17 they created against Tottenham. They were by no means perfect though, guilty of some sloppy passing in the first half when Crystal Palace had their best spell of the game. But Sadio Mane's goal to double their lead seemed to refocus their minds as they ruthlessly hunted goals.

From then, they ebbed and flowed like the Liverpool we have come to admire, using the counter-attack to devastate an already wounded Crystal Palace, especially for Roberto Firmino's first. He and Mohamed Salah both scored twice and assisted - Salah doing so from the bench - while Takumi Minamino opened things up with his first Premier League goal. A mention too for a wonderful, curling strike from Henderson.

That was also another delightful aside of Liverpool's performance. Each of the seven goals was finished superbly and all assisted by different players - Mane, Firmino, Andy Robertson, Trent Alexander-Arnold, Salah, Joel Matip and Alex Oxlade-Chamberlain - which is the first time in Premier League history seven different players have assisted a goal for a team in a match.

Not that Liverpool needed much of it, but it will give them a pre-Christmas boost heading into an unprecedented eight-day rest before their next game against West Brom. The Baggies have the worst defensive record in the Premier League and could prove to another happy hunting ground for Liverpool.
Charlotte Marsh

Flashy it wasn't but a big win for Man City This felt like a big moment in Manchester City's season.

When the first ball was kicked at St Mary's Manchester City were 10 points off league leaders Liverpool, who had just sent out a bellowing title call at Crystal Palace.

Anything other than three points was not an option for Pep Guardiola - and his team played like it. As soon as they got their noses in front, it was risk-adverse football played in a very controlled manner with plenty of men getting behind the ball at every opportunity. It was far from the swashbuckling City performance we have come to expect under Guardiola, more of a workmanlike one which was built around defensive unity. That is now six clean sheets in their last seven games with the axis of John Stones and Ruben Dias continuing to impress as City moved on to the 23-point mark, eight behind leaders Liverpool.

Going forward, once again it was the influence of Kevin De Bruyne that made City tick.

Playing a touch further forward than usual with no out-and-out striker selected by Guardiola, De Bruyne was the instigator of every promising attack created by the visitors.

When called upon to produce the perfect final ball, he found it, supplying Raheem Sterling with a typically fierce pass that Guardiola will have been relieved to see was actually finished clinically after the waywardness in front of goal in the draw with West Brom.

No player made more key passes than De Bruyne (4), whose drive, energy and clever passing played a big part in keeping Southampton at bay in the closing stages.

If City win their game in hand, then it takes them up to second place. The Premier League table, all of a sudden, would have a familiar feel to it.
Lewis Jones 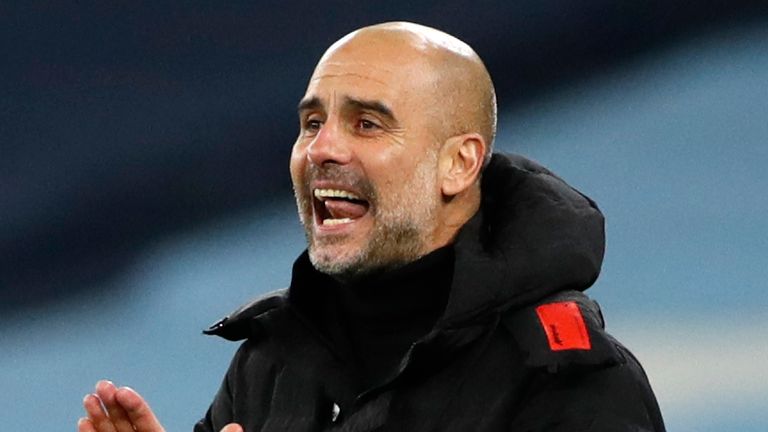 Jan's the man for Southampton

Ralph Hasenhuttl has many qualities. But what makes him a manager going places is his ability to take players to the next level. Players seem to grow under his watch.

The Denmark defender signed for the Saints in 2018 for £18m and was steady if unspectacular in large parts of Hasenhuttl's early tenure with the manager admitting being tempted to bring in reinforcements to sure up a leaky backline. However, Vestergaard looks like a new signing himself, catapulting his performances to levels that must make him one the best centre-backs in the Premier League.

Vestergaard was again superb at the back in the defeat to Manchester City, showing a huge amount of quality on the ball. No player made more successful passes than him on the pitch with his liking for a raking 60-yard switch of play to Kyle Walker-Peters a joy to behold. He's a huge threat in attack too, threatening with two headers from James Ward-Prowse corners - a combination which has led to a return of three goals for the defender this season.

With him at the heart of their defence, there is no doubt Saints will go marching on this season.
Lewis Jones

Crystal Palace can bounce back from 'humiliation' It was an afternoon to forget for Crystal Palace. Roy Hodgson said he and his players were 'humiliated' and could not draw any positives from the performance. Indeed, it is the first time Crystal Palace conceded seven goals in a home match in their entire history.

Although understandably disappointed with a 7-0 hammering when speaking after the game, Hodgson did have things to be encouraged by. Despite conceding inside three minutes, Crystal Palace were the better side for the next half an hour and created some good openings.

What let them down there was timing - Jordan Ayew just missed a Wilfried Zaha cross at the back post, helped by a Joel Matip intervention, before the roles were reversed when Zaha just ran too far ahead of an Ayew cut-back. But both did well when Palace were in the ascendancy, with Jeffrey Schlupp also looking lively on his return to the XI.

You cannot even say Crystal Palace defended particularly badly either - Vicente Guaita barely had a save to make - but they faced a table-topping Liverpool side who finally found their ruthless edge. They were simply overwhelmed.

While it may feel like woe at the moment, Crystal Palace have already reached a good position in the table so do not have a relegation battle to be concerned with. Let's face it - if Southampton can bounce back from a 9-0 defeat at Leicester last year, Crystal Palace most certainly have the heart and determination to do the same.
Charlotte Marsh

Fulham won't go down without a fight 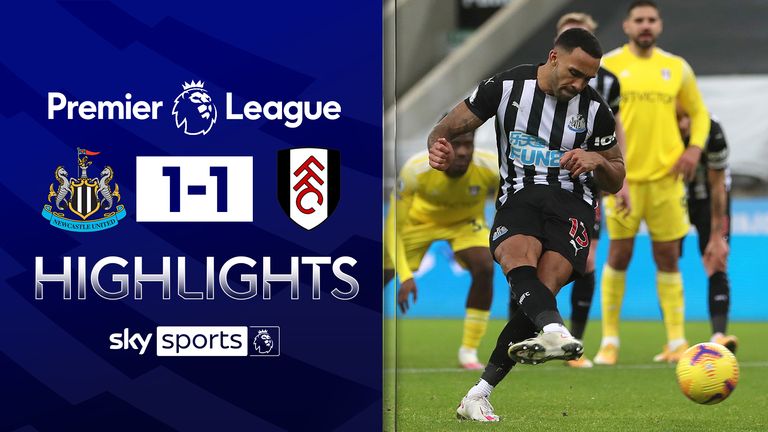 FREE TO WATCH: Highlights from Newcastle's draw with Fulham in the Premier League

The fact Fulham will have left St. James' Park disappointed with a point just goes to show how much progress Scott Parker's side have made since their shaky start to life back in the Premier League.

The play-off winners' hopes of avoiding an immediate return to the Championship were struck off after five defeats from their opening six games, but two wins and three draws from their next eight have given the Cottagers genuine hope.

For 45 minutes at Newcastle, Fulham were superior in every department and should have had more to show for their dominance than the one-goal lead gifted to them by Matt Ritchie's bizarre and unfortunate own goal. Fulham looked on course for another away victory that would have been as impressive and as important as their win at Leicester at the end of November, but the double jeopardy of Joachim Andersen's red card and Callum Wilson's penalty stopped them in their tracks.

Many sides would have crumbled under the pressure of a numerical disadvantage. Dare I say, Fulham would have at the start of the season. But Fulham's resolve was a testament to the momentum Parker's project is building, and it served as a timely reminder to the doubters this side is not going to go down without a fight.
Jack Wilkinson