Pierre-Emerick Aubameyang scored twice in Arsenal's 3-0 win over Newcastle. Has he put his struggles behind him? Plus: Newcastle's downward spiral continues under Steve Bruce and the key talking points from Sunday's game 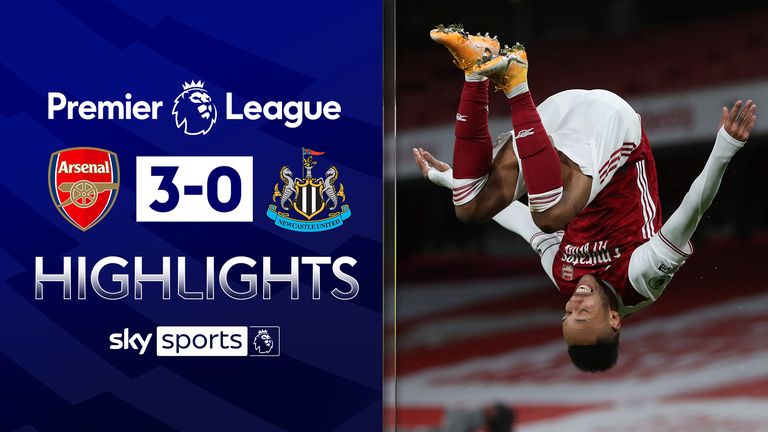 Pierre-Emerick Aubameyang's first-half performance against Newcastle felt like more of the same from a player struggling to rediscover his best form. The Aubameyang of last season would surely have converted at least one of the chances that fell his way before the break.

But thankfully for Arsenal, the second period brought a change of fortunes for the 31-year-old. Aubameyang took his first goal clinically, rifling home from Thomas Partey's pass following a swift counter-attack, and then converted his second from close range after fine work from Cedric Soares.

It was Aubameyang's first double since the FA Cup final win over Chelsea in August. Suddenly, a player who has appeared badly out of sorts for most of this season has netted four goals in his last six games in all competitions.

Arsenal will hope he is turning a corner. Aubameyang's struggles have been a major issue for Mikel Arteta this season. Even with their three goals at the Emirates Stadium on Monday night, his side have only managed 23 in 19 Premier League games overall.

But with Aubameyang's confidence restored, that number should be far higher across the next 19 games of the campaign - especially with so many positives elsewhere on the pitch too.

Emile Smith Rowe and Bukayo Saka continued their excellent form against Newcastle, combining superbly for the latter's goal, and there was also an impressive midfield display from the returning Partey on his first start since early December.

Arsenal look to have improved at the back end of the pitch too. The clean sheet against Newcastle was their fifth in a row - something they last managed way back in February 2006.

Aubameyang has Arsenal looking up - and he's not the only reason for cheer at the Emirates Stadium right now.
Nick Wright

Newcastle took a respectable total of 17 points from their first 11 Premier League games of the season but they have taken only two from the last seven following Monday's 3-0 loss to Arsenal. The worry is how exactly Steve Bruce will stop the slide.

He tried everything against Arsenal, making eight changes to the side that slumped to a 1-0 loss to bottom side Sheffield United and deploying Andy Carroll and Callum Wilson as twin strikers in what looked like an attack-minded team.

But the alterations ultimately made little difference. Bruce's side showed slightly more attacking intent but there was little in the way of effectiveness. They only mustered four shots on goal all night and had just 34 per cent of the possession. "They were more offensive but they still never looked like scoring," said Jamie Carragher.

It was just the latest in a long line of dismal showings and Newcastle fans are growing increasingly restless. Bruce talked about doing things "his way" after the Sheffield United game, but quite what that means is unclear. This Newcastle side do not have a discernible playing style and there was little evidence of improvement on Monday night.

Gary Neville talked about "failure and misery" being "embedded" at Newcastle after years of underachievement. But fans are surely entitled to expect more ambition than this. The pressure on Bruce - from the outside, at least - continues to rise.
Nick Wright

Even in the weeks before Luke Shaw's hamstring injury in November, he was United's best defender.

His man-of-the-match performance at Anfield summed up his progression this season: dominant and constantly harrying Mohamed Salah at one end - according to Graeme Souness, he handled the Egyptian better than any defender he's seen - and creating more than any other United player at the other.

His passing accuracy in the opposition half (81 per cent) was highest in the Manchester United side, and he won more fouls and made more key passes than any of his team-mates.

Alex Telles' arrival will have no doubt created much-needed competition, and Shaw looks to have reacted with a string of consistent performances.

To some, Shaw was the epitome of post-Fergie Manchester United - an expensive flop. But despite this being his seventh season at Old Trafford, he is barely at his peak at 25.

As we know, the modern full-back must attack and defend in equal measure. There is room for improvement in his delivery, but Shaw looks to have his power back, and is becoming the poster boy for this improved Manchester United.
Gerard Brand

Liverpool in touch, even at lowest ebb

Liverpool have problems. But for that reason, they should be satisfied with their point against Manchester United.

For all the issues emerging at Anfield - no goal in three games, the full-backs' drop in form, a lack of intensity in midfield, no recognised centre-backs - they aren't suffering in a points sense, relative to the rest of the Premier League.

Defence hasn't necessarily been their issue. The personnel jigsaw caused by a lack of centre-backs most definitely has. In filling in at the back, Liverpool have lost much of their midfield might.

When Matip returns - Jurgen Klopp says he should be ready in the coming days - Fabinho and/or Jordan Henderson will return to midfield, meaning the front three should have more to feast off. There is no doubt Mohamed Salah, Sadio Mane and Roberto Firmino have lost a degree of intensity and bite, but it is equally true that service hasn't been the same.

This may well be Liverpool's lowest ebb in a few years - the last time they went four without a win in the Premier League was early 2017, but Jurgen Klopp will be optimistic that even with that, they are well in touch.
Gerard Brand

Stones is the comeback kid John Stones is having a better comeback than Craig David. Not too long ago, he was the Manchester City outcast. Mistakes followed him around, he barely started and was linked with moves away from The Etihad.

But, as Stones told Sky Sports after the 4-0 win against Crystal Palace, he's gone back to basics and looked at himself, his game and has worked incredibly hard to put himself back into Pep Guardiola's good graces. In fact, Stones and Ruben Dias have started together in 10 games in all competitions this season, conceding only once.

Stones helped to keep another clean sheet on Sunday in his day job as a centre-back but it was his attacking contributions that grabbed the headlines. Defenders are known for their abilities in the air, but it was the Sergio Aguero-esque poachers goal for his second that was the most impressive. The goals represented his first Premier League strikes for Man City and his first double in the league.

Sky Sports pundit Micah Richards said on Super Sunday: "I think John Stones is playing some of the best football of his life. I think he needs to be in the next England squad because the form that he's showing is what we expected a couple of years ago. 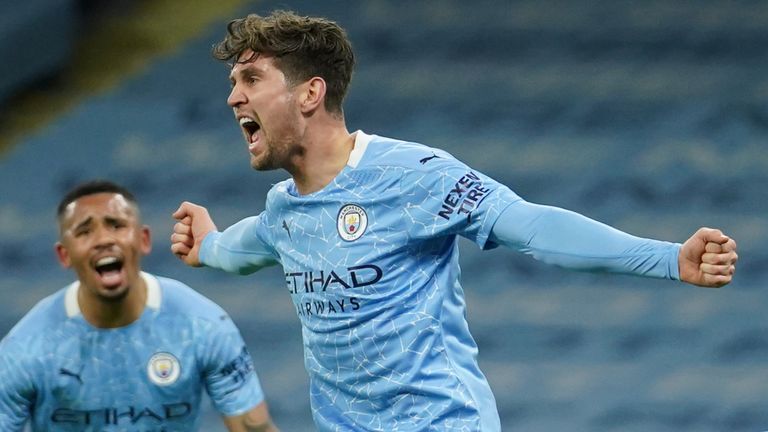 "We all said he could be one of the best defenders in the world and if he keeps this form up, there's no reason why he can't be."

Graeme Souness added: "If you get a bit of paper and write down a list of things you'd want from a player who is a top centre-half and he ticks every box. One of the things missing for me, and it is a big thing, was decision making at important times. He seems to be alert from the first to the last minute now. He's come back from the dead and he is a fabulous player."

Just to round things off, Stones also had the highest number of successful passes - 112 of his 117 made it at a rate of 95.7 per cent - and also led the way for touches (120). At 26, Stones is finally meeting those weighty expectations. Long may his renaissance continue.
Charlotte Marsh 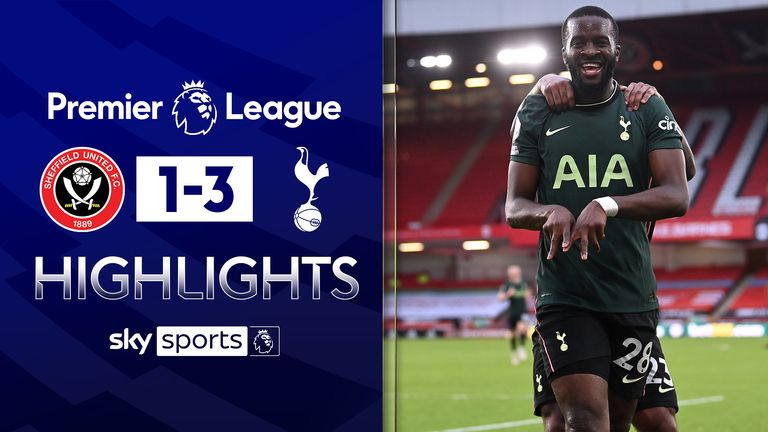 For three second-half minutes, the nerves were rankling for Tottenham.

Having dropped a league-high 10 points from winning positions this season, the sight of David McGoldrick halving the two-goal lead Spurs had earned so emphatically in the first half through Serge Aurier and Harry Kane threatened to lay the foundations for another costly Spurs collapse.

The Blades looked to have got an insipid first 45 minutes out of their system and appeared to have reached basecamp from which their quest for a third consecutive win on all competitions could begin.

But before they even had the chance to test the resolve of a stuttering Spurs side, the game was whisked emphatically out of reach by a moment of brilliance from Tanguy Ndombele.

Having looked like his days at Spurs were numbered when Jose Mourinho first arrived, the 24-year-old Frenchman's revival has come to typify the upturn Spurs have made under the Portuguese's watch, and his goal in South Yorkshire was the crowning moment of his personal transformation.

Running away from goal, surrounded by two Sheffield United defenders, Ndombele hooked an outrageous lob over Aaron Ramsdale to restore Spurs' two-goal cushion with a strike that was as sensational as it was audacious.

Mourinho labelled the moment "genius" and, given the trajectory of Ndombele currently, Spurs could be treated to many more performances of this kind before the season is up.
Jack Wilkinson