Cambridge stay top of League Two after 3-1 win over Crawley; Carlisle beat Exeter 1-0 in first match since January 2; Tranmere sneak a 1-0 win over 10-man Morecambe; Newport slip to seventh after 2-1 defeat to Harrogate

The U's took an 11th-minute lead when Joe Ironside touched home a Hoolahan free-kick, but their joy was short-lived as Crawley levelled three minutes later through Jake Hessenthaler's smart finish.

Cambridge regained the lead on the stroke of half-time when Kyle Knoyle let fly from distance and added a late third when Hoolahan curled in.

Carlisle returned to action with a 1-0 win over Exeter as Lewis Alessandra volleyed in the only goal of the game from Omari Patrick's cross in the ninth minute.

Morecambe slipped to a 1-0 defeat at home to Tranmere after playing the second half with 10 men.

The game burst into life in the 36th minute when the Shrimps were awarded a penalty after Peter Clarke was adjudged to have handled a Cole Stockton shot. Adam Phillips stepped up to take the kick and blazed the ball over the crossbar. 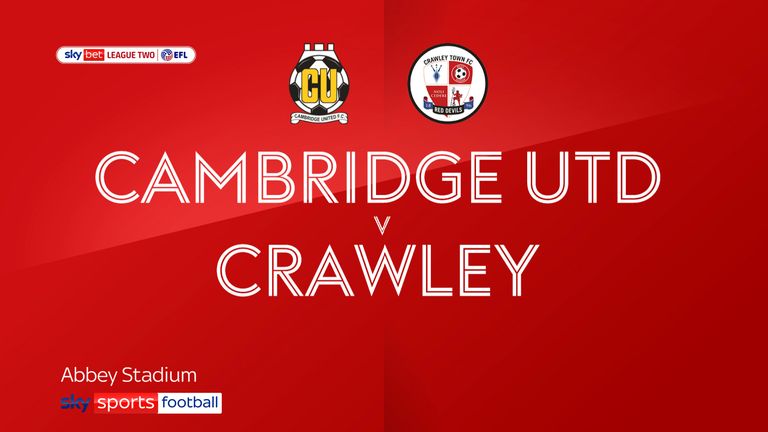 Highlights of the Sky Bet League Two match between Cambridge and Crawley.

There was more drama before the interval when Yann Songo'o was sent off for his part in an altercation during a stoppage in play.

Kaiyne Woolery snatched the winner for Tranmere with a neat header from Danny Lloyd's cross 15 minutes from time.

Forest Green and Cheltenham played out a goalless draw, with Rovers having Ebou Adams sent off for a second bookable offence after 68 minutes.

At the bottom, Stevenage snatched a valuable 2-1 victory over fellow strugglers Grimsby to ease their relegation concerns.

Boro took the lead shortly before half-time when Elliott List punished some slack defending to race through and slot home.

A debut strike from Stefan Payne looked set to snatch Grimsby a point in time added on, only for Matty Stevens to grab an even later winner for Stevenage.

Harrogate came from behind to beat Newport 2-1.

The Exiles took the lead in the 17th minute when a Matt Dolan corner fell to Luke Gambin and his shot went in off Exiles striker Jake Scrimshaw, who knew little about it.

Josh March equalised for Town after 34 minutes when Aaron Martin flicked on a James Belshaw punt upfield and the striker drilled home. 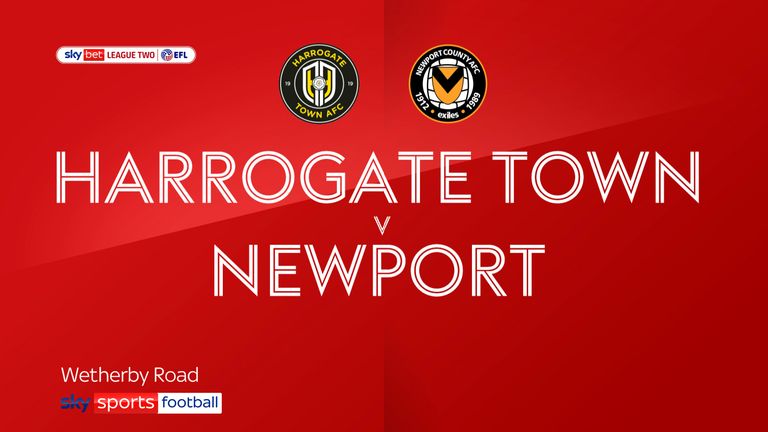 Highlights of the Sky Bet League Two match between Harrogate and Newport.

Harrogate went ahead after 66 minutes when Martin headed home from George Thomson's corner and held on comfortably after Newport defender Liam Shephard was sent off.

An own goal from James Brophy and an Eoin Doyle strike earned Bolton a 2-0 win over Leyton Orient, while Danny Rowe and Callum Cooke scored for Bradford as they beat Barrow 2-1, with Scott Quigley scoring from the penalty spot for the visitors.

Substitute Davis Keillor-Dunn's superb curling strike grabbed Oldham a 2-1 win over Salford, who had gone ahead through Ian Henderson, only for Dylan Bahamboula to level.

The Valiants got off to a flying start, with Devante Rodney lashing them in front inside 60 seconds.

They doubled their lead after 21 minutes when David Worrall's shot deflected in off Southend defender Tyler Cordner and added a third seven minutes later through Adam Crookes' close-range finish.

It was four in first-half stoppage time when Rodney grabbed his second of the game, and after Nathan Ferguson pulled one back, Manny Oyeleke sealed a convincing win for Port Vale.