Tottenham were knocked out of the Europa League by Dinamo Zagreb, losing 3-0 in Croatia and 3-2 on aggregate; another poor performance follows a bruising 2-1 defeat against Arsenal on Sunday; Jose Mourinho says he is more than sad and apologises to Tottenham fans 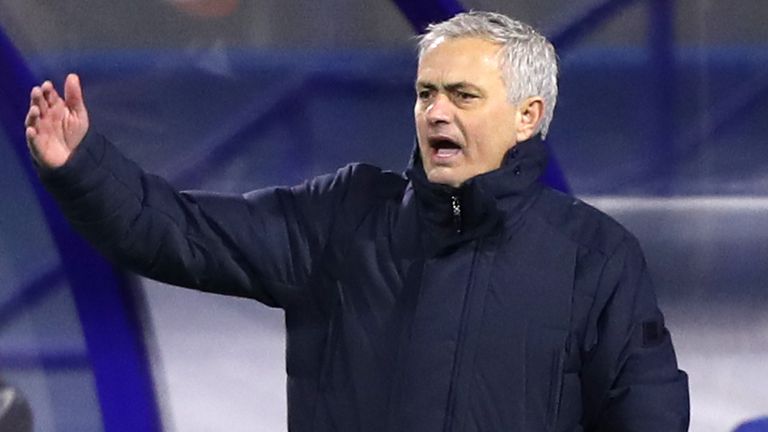 Jose Mourinho said Dinamo Zagreb won their Europa League last-16 tie against Tottenham on attitude, claiming his team "didn’t bring to the game, not just the basics of football, but the basics of life".

It was a horrible evening in Croatia, with Spurs throwing away a 2-0 first-leg lead to lose the last-16 tie 3-2 on aggregate in the second leg thanks to an inspired hat-trick from Mislav Orsic.

Spurs would have been wanting a reaction after a 2-1 defeat to Arsenal in the Premier League on Sunday, but only seemed to regress further and were deservedly dumped out of the Europa League in a shock defeat.

On behalf of my team, in spite of maybe some of them who don't share my feelings and my emotions, I can only apologise to the Tottenham supporters and I hope that the players feel the same as I feel.

After the game, Mourinho gave an honest assessment of Tottenham's performance, and apologised to the fans for another below-par showing.

He told BT Sport: "In the 90 minutes and in the first half of extra-time, there was one team that decided to leave everything on the pitch. They left everything there - they left sweat, energy, blood and at the end of the game, they had even tears of happiness. Very humble, very committed and I have to praise them.

"On the other side, my team didn't look they were playing an important match. But for me, it is for the respect I have for my own career and my own job. Every match is an important match for me and I believe that for every Tottenham fan at home, every match matters and another attitude is needed.

"To say that I feel sad is not enough because what I feel goes much further than sadness.

"I just left Dinamo's dressing room where I went there to praise the guys and I feel sorry that one team that is not my team won the game based on attitude, so I feel more than sad. Football is not just about players who think they have more quality than others. The basics of football go beyond that, the basics of football is the attitude and they beat us on that.

"Many times I fear my thoughts, my feelings but I don't blame myself in the sense that I always share them. Before the game, I told the players the risks of a bad attitude. I told them at half-time, even with 0-0, the risk of playing the way we were playing and it happened because I believe that the players only realised the game was in risk when they scored the second goal and it went to extra-time.

"I feel sorry that my team, I belong to that team, is the team that didn't bring to the game not just the basics of football, but the basics of life, which is to respect our jobs and to give everything.

"On behalf of my team, in spite of maybe some of them who don't share my feelings and my emotions, I can only apologise to the Tottenham supporters and I hope that the players feel the same as I feel."

Hugo Lloris said their shock exit on Thursday was a "disgrace" and a reflection of "what's going on in the club".

The France World Cup winner echoed Mourinho's concerns about his players lacking professionalism in their performance.

"Mentally we should be stronger, more competitive."

"I think we are more than disappointed, it is a disgrace," Lloris told BT Sport. "I hope everyone in the changing room feels responsible.

"The taste of defeat is more than painful. We are a club full of ambition, I just think at the moment it is a reflection of what is going on in the club.

"We have a lack of basics, fundamentals, our performances are just in relation of that. Mentally we should be stronger, more competitive."

The experienced goalkeeper said Spurs, who were also criticised for a poor performance in Sunday's north London derby loss at Arsenal, had underestimated the Croatian champions.

"When you are not ready at this level, you pay," he added. "There is quality everywhere and if you don't respect the opponent they can punish you, that's what happened."

Tottenham, who are eighth in the Premier League, visit Aston Villa on Sunday, live on Sky Sports.

"It is a huge body blow for Tottenham and the Tottenham fans."