Jose Mourinho sacked: Tottenham and manager left to count the cost of their failed gamble

Jose Mourinho has been sacked by Tottenham, with the club on course to finish a second season outside the top four and this week's Carabao Cup final their only hope of silverware. It was an unlikely marriage and, despite a few fleeting moments, has been costly for manager and club alike.

Daniel Levy and Jose Mourinho rolled the dice with the Portuguese's appointment as Tottenham manager. Seventeen months on, the gamble has emphatically failed to pay off for either side, with the manager stunningly sacked on Monday morning.

The shock was not in his departure but in the timing of it, coming just days before the club's Carabao Cup final with Manchester City at Wembley.

After all, Mourinho was brought to the club to turn Tottenham into silverware winners - but with Spurs on course to finish outside of the top four for the second season in a row, criticised for the negativity of their football, and with uncertainty surrounding the futures of numerous key players, Levy dramatically pulled the plug on the project.

It is a strikingly swift move from the Spurs chairman, given the fact that in November 2019 he took the big decision to trade Spurs' historical style and panache for a more ruthless edge under Mourinho, a manager he'd been targeting for a long time. The objective was to turn Mauricio Pochettino's too-nice nearly-men into battle-ready winners.

But it was a calculated risk from Mourinho's side, too. After the damage caused by his Manchester United tenure, he staked his reputation rebuild on a Spurs squad he first described as "very, very good" - but knowing he would not have the transformative spending power he had previously had at former clubs.

At the end of it all, Levy is facing Spurs supporters rebelling over two fruitless campaigns, in which only fleeting moments of individual brilliance lit up a risk-adverse, anti-ambition approach to the game. Still no major silverware and now no flair.

Throw in the scornful reaction of the club's supporters to Spurs signing up for the European Super League and Levy's popularity has plummeted.

Mourinho, meanwhile, is stepping into an uncertain future, certainly in terms of the Premier League.

In the wake of his Manchester United exit, he made interesting comments about how the experience had led him to change his approach, to look only internally among his coaching staff for the mistakes they had made and not use outside issues as an excuse.

But in recent weeks he had returned to the tactless tactics of pointing the finger of blame in each direction but his own while his shortcomings over the past two seasons have been clear to see.

Which club will now be willing to pay his hefty wages on the back of the recent failures, the falling win percentage, and the litter of divisions and negativity he leaves in his wake?

Mourinho has fought bitterly to defend his reputation - but his status as a top-level modern-day coach is diminishing.

It is not cynical to say the failure of these gambles could easily be foreseen. Certainly, few Spurs supporters would argue they didn't see this coming.

But perhaps the frustration is that, despite their underlying concerns, the majority of the fanbase - and neutrals alike - were swept up in the hype and excitement about Mourinho's arrival at Tottenham and the feeling that this unlikely partnership could pay off.

The encouraging early signs added to that sensation. Harry Kane scored seven goals in his first 10 games under Mourinho, a rejuvenated Dele Alli bagged four in four. Perhaps, indeed, Mourinho's tougher streak is what Spurs' players had been missing all along?

But results soon started to stutter, with injuries to Kane and Heung-min Son damaging blows. And then the facade of Mourinho's early positivity about the tools at his disposal began to fade. After Spurs' Champions League exit to RB Leipzig, he openly wished the rest of the season away.

"If I could move immediately to the first of July, I would," he said. A brutal reality? Perhaps. An inspirational, encouraging message for the rest of the squad to step up and seize their chance? Certainly not. And from there a negative slant on proceedings began to bubble below the surface.

The subsequent run of results only added to this gloom. There were defeats to Chelsea and Wolves, and a FA Cup exit at home to Norwich. Spurs did manage a point at Burnley but their last competitive action came in Leipzig, where a 4-0 aggregate rout was confirmed.

Lockdown brought a chance to refresh and with key players back fit Spurs eventually finished the season strongly, winning five and losing just one of their nine games after the restart.

Gareth Bale's sensational summer arrival then added to the re-found optimism - and a reminder that Levy has stumped up cash in the transfer market to back Mourinho.

While the returning hero was sidelined for much of the first half of the season, Spurs were fuelled by Kane and Son's record-breaking link-up play, as a counter-attack style synonymous with their manager delivered remarkable results at the start of this campaign.

There was the thrill of the comeback win at Southampton and the emphatic 6-1 thrashing of Manchester United at Old Trafford, and in November 2,000 Spurs supporters were present to watch their side win the north London derby with just 30 per cent of possession.

It was a new style for these fans to watch but Spurs were top of the league. The Special One was back. Or so it seemed for that brief period.

Instead, when the fine margins fell against Spurs at Anfield in mid-December, it began a period of realisation that Spurs' reliance on Kane and Son was too heavy and that, behind them, this defence was not strong enough to allow opposition sides so much of the ball week in, week out.

Five defeats in six Premier League games in January and February turned Tottenham from title contenders to a side trailing badly in the top-four race.

Five wins in a row against weak opposition had Mourinho bragging about the 100 goals his 'negative' team had scored this season but the abysmal collapse in the second leg of their Europa League tie with Dinamo Zagreb was one of the lowest moments in the club's recent history.

It completed a nightmare week after out-of-form Arsenal had avenged their derby defeat. Erik Lamela's Rabona goal in that game could have been one of the all-time great Spurs goals but instead his subsequent sending off capped a capitulation.

It summed up the approach: for Kane and Son to grasp rare attacking moments and then rely on a fragile, ever-changing personnel in defence to hold out against increasing pressure.

The eight defensive-minded players on the pitch against Everton in Mourinho's final game in charge epitomised it.

That bitter off-field mood would have been an atmosphere familiar to many involved at Manchester United, as Paul Pogba's remarkable recent interview with Sky Sports revealed. 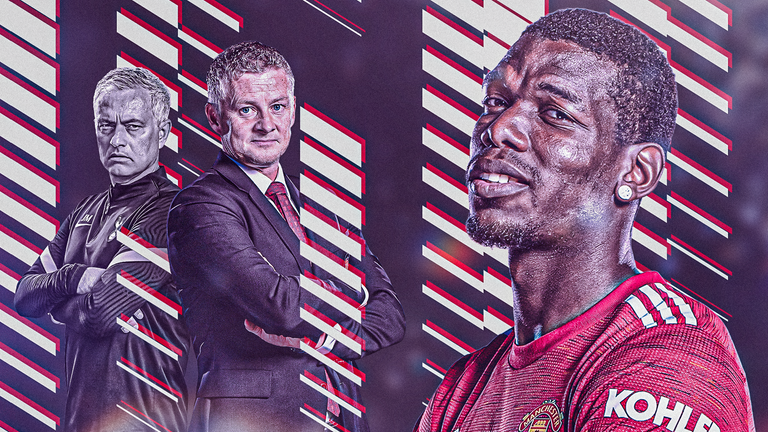 At Spurs, Mourinho fell out with Tanguy Ndombele last season but while that midfielder had responded positively, the manager's treatment of Dele Alli this term has had the opposite impact.

There were also his comments about Eric Dier's 'crisis of confidence' which raised eyebrows and led to the manager backtracking after the player rejected that view.

No manager, no problem?

Jose Mourinho has been sacked as Tottenham manager as they bid to win their first major trophy since 2008. They face Manchester City in the Carabao Cup final at Wembley, but you could land yourself £5,000 for free by simply predicting what

There were no apologies after a 2-2 draw at Newcastle, though, when Mourinho blamed his players for their mistakes, their lack of "profile, vision, balance, which belongs to the top players", and even the white hairs on his head.

"They come with things I'm not used to seeing in football matches at this level," he said, in a remark which would surely have not gone down well in the Spurs dressing room.

I have to be honest and say I saw things on the pitch, not in terms of attitude but in terms of profile, vision, balance, which belongs to the top players, I didn't see in every position.

Mourinho was attempting to distance himself from the quality he was now working with. It was a reaction as transparent as his distraction techniques after the 3-1 defeat at home to Manchester United earlier this month, when his post-match comments were mocked even by the son of Ole Gunnar Solskjaer.

But dangerously, the results and direction of the club were also in danger of alienating crown jewel Kane, who passed up the chance to commit his long-term future to Spurs when asked about his next steps during last month's international break.

Mourinho's treatment of another player of the highest quality also contributed to his downfall.

Bale's headline-grabbing return to the club last summer, on loan from Real Madrid, came with caveats. The Welshman was carrying an injury and had been starved of first-team football for much of the previous campaign. But his quality is not in doubt.

While the failure to maximise this expensive investment is shared between Mourinho, Spurs, and Bale himself, there was a sense the manager never trusted the forward.

A run of six goals in six games in February and March, when Bale was finally deemed fit, seemed to signal a long-awaited return to form, but a poor performance against Arsenal would be his last start under Mourinho.

Bale wasn't seen on the pitch again after he revealed on international duty his return to Spurs had been driven by a desire to be fit to play for Wales at this summer's Euros. The club's supporters could feel understandably annoyed by those comments but it is hard to escape the sense this once romantic return could have been far sweeter if managed differently.

Bale could still be a Spurs hero if he strikes a winning blow against Man City this weekend, though. And who knows, perhaps the team can still close that gap on the top four to salvage their season.

The odds are against them but sometimes unlikely things can be achieved in football. However, for Levy and Mourinho, their gamble to match-up at Spurs has proven to be a costly mistake.