Foden scores and stars in Villa win as City close on Premier League title; Guardiola: 'His influence is massive right now'; Redknapp: 'The way he is going, it looks like you cannot keep him out of this [England] team'

John McGinn had stunned City by opening the scoring after just 20 seconds but Foden finished a smart move to pull his level and was a menace all night as City completed the comeback win to move 11 points clear at the top.

Foden inspired City during their Champions League quarter-final win over Borussia Dortmund and has been increasingly influential in recent weeks.

"He is growing, this guy is growing," Guardiola told said after the game.

"He's making steps forward every time. His influence in our game is massive right now. He's so aggressive without the ball. He's becoming a serious player.

"Phil, right now, in the last games especially, is becoming such an important player. His influence in the final third is so important." 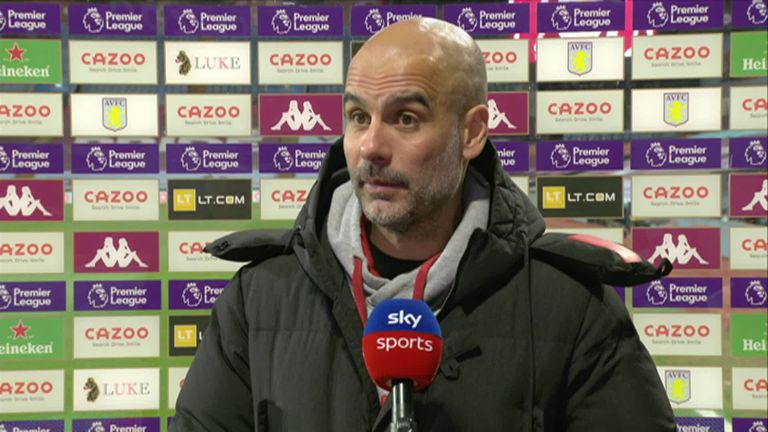 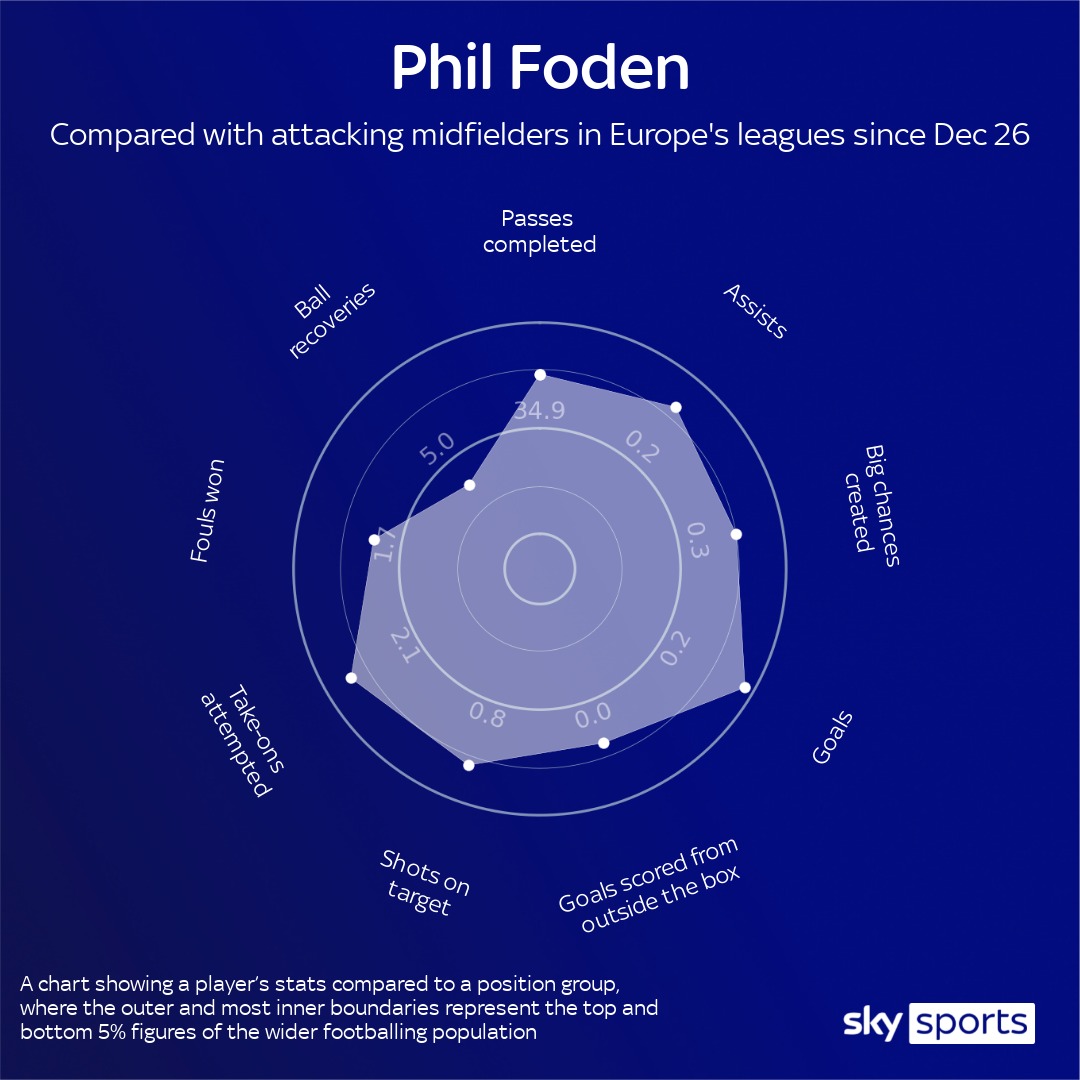 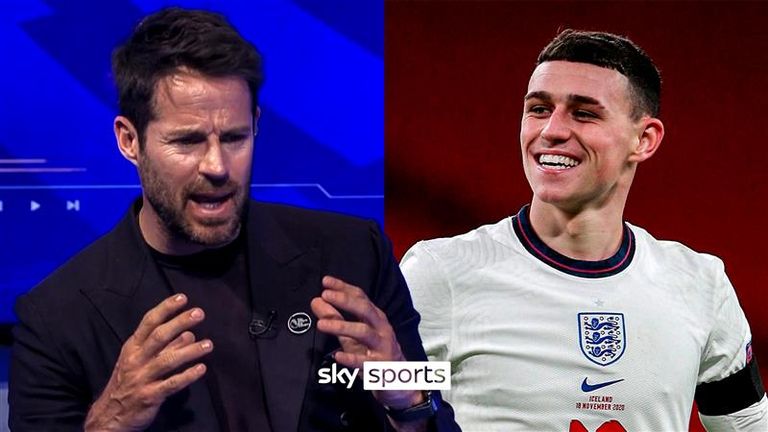 Sky Sports' Jamie Redknapp declared Foden the "real deal" after watching another starring performance in front of Gareth Southgate and backed him not just for the England squad but the starting XI.

Redknapp said: "Foden, Gundogan and Bernardo Silva were majestic tonight. It was incredible the way they moved the ball, chased, closed down - they are great examples to any young footballer.

"And Foden... I have got excited by young talents before but this kid is the real deal. For a young player to play with so much flair and aggression; he's incredible.

"Sometimes you worry when kids get too much, too early, are they going to lose that hunger and desire but if that kid keeps accelerating at this rate, anything is possible. He's frightening.

"He is effective, he gets into the box, he gets into danger areas. He is so versatile and that is what makes him such a beautiful player to watch.

"We all wondered about the development, whether it would stunt his growth staying at Man City and maybe not going out on loan, but the development has come through playing day in day out with Bernardo Silva and David Silva last year and Kevin De Bruyne. That is an education you cannot buy, playing with the best players in the world.

"I just think he can play anywhere and that is the modern game now, especially in that Manchester City team where they are total football at times. I remember when they played Liverpool last season and he turned up on the right tormenting the left-back.

"I think with players like that, the important thing is not to pin them down to a position because he is so good you just want to see him on the ball. He can work off either side, he is so naturally adept with either foot. He can score goals, make goals.

"It is hard not to get excited about this guy. Of course, he is going to make the [England] squad. I was thinking he might not start the tournament but I reckon he is going to finish it. At the moment, the way he is going, it looks like you cannot keep him out of this [England] team.

"We have got an abundance of talent. But the way he is playing right now he is forcing his way into the starting 11 with performances like that because he is taking games by the scruff of the neck at such an early age. Not many people can do that. He is playing in the best team in the Premier League, playing a brand of football we all want to see.

Pep: Premier League the most important 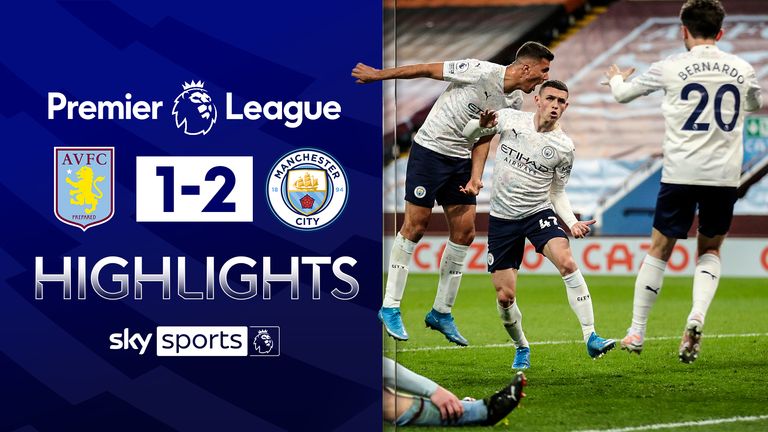 After two days dominated by the ill-fated Super League, Guardiola kept his focus on the Premier League and insisted City deserved a victory that leaves them just eight points from the title.

The City boss - whose side face Tottenham in the Carabao Cup final on Sunday, told Sky Sports: "It was not the best start that we imagined but we were incredible. We played so good after 10 against 11, then when Cash was sent off as well.

"The Premier League is the most important title. The next one is Crystal Palace and we are going to try to get it closer."

Guardiola was angered by the sending off of Stones at the time but asked about the incident, said: "I didn't see the action in the TV. He is late but the intention is not (there).

"But it is a good lesson for the final on Sunday. If you play a final 10 against 11 you have no chance, and the same against PSG." 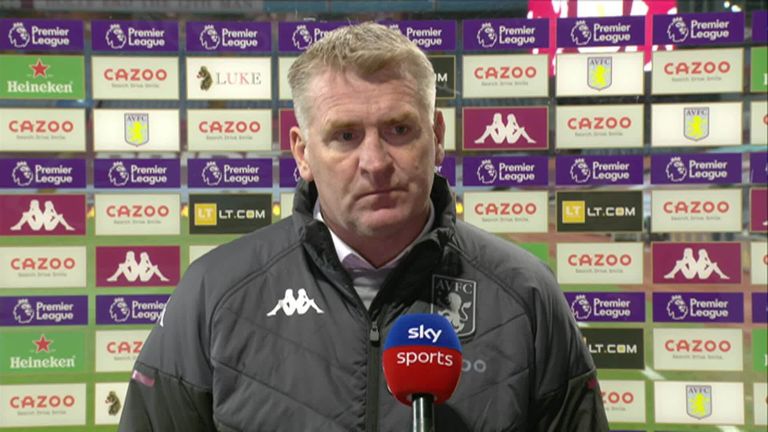 Villa boss Dean Smith was frustrated with the manner of the goals his side conceded and also felt the sending off of Cash was costly.

Smith told Sky Sports: "The disappointing part for me is the manner of the goals. If you lose to Manchester City you want them to be wonderfully executed goals rather than the goals we conceded.

Super 6 Extra is similar to the game we all know and love, but the beauty of our Sunday special lies in having to correctly predict the answers to six questions to scoop the £5,000 jackpot. Manchester City vs Tottenham is the featured game this week.