The Prime Minister announced that the country will proceed to step three of his roadmap for lifting restrictions from May 17; every PL club will be able to play one match in front of fans before the season ends; capacities will be capped at 4,000 or 50 per cent for smaller sports venues 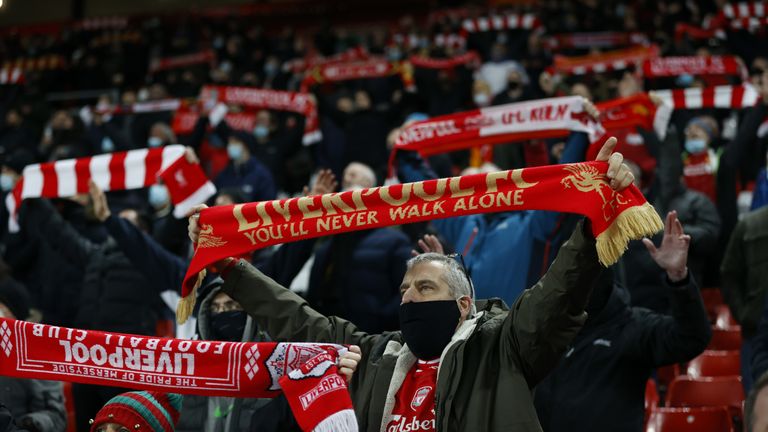 Paul Gilmour reports on the news that fans will be allowed to return to grounds from Monday, May 17 - in line with the government's roadmap out of lockdown

Sporting venues across England will be able to welcome back spectators from next Monday, Prime Minister Boris Johnson has confirmed.

Johnson said at a press conference on Monday afternoon that the Government was proceeding with its plan to take the third step in its coronavirus recovery road map, first set out on February 22.

"We'll unlock the turnstiles of our sports stadia subject to capacity limits," Johnson said in his opening speech as he detailed the further easing of lockdown in England.

It means larger seated outdoor venues will be able to admit up to 10,000 spectators from next week.

The Premier League pushed its penultimate round of matches back to May 18 and 19 so that every club would be able to play one game in front of supporters before the end of the season on May 23.

In a statement, the Premier League said that it welcomes the further easing of lockdown restrictions and the ramifications of the changes for professional football.

Premier League chief executive Richard Masters said: "It will be brilliant to see fans back. They have been hugely missed and the Premier League has not been the same without them. Their presence will ensure a fantastic finale to the end of our season.

"Although only a small number of home fans will be at our matches next week, this is an important step in our return to normality.

"We will continue to work with the Government and other authorities as our priority is to have full vibrant stadiums - including away supporters - from the start of next season. Only then will we get back to the real Premier League."

The statement added: "Clubs have a proven track record of delivering Covid-safe environments and have plans to ensure the safe return of their fans for fixtures played on Tuesday 18 and Wednesday 19 May, and the final day of the season on Sunday 23 May."

The league confirmed last week that the matches will be open to home supporters only.

The decision to ease restrictions comes as the country continues to benefit from an accelerating vaccination programme and a fall in deaths and hospitalisations related to Covid-19.

The Government hopes to allow venues to admit significantly higher numbers of spectators from June 21 onwards and it has set up an events research programme (ERP) to test out different safety measures at a range of sporting and cultural 'pilot' events in order to achieve that.

The first ERP sports event with spectators in attendance this year was day one of the World Snooker Championship on April 17, with crowds at the Crucible Theatre in Sheffield being increased as the tournament progressed, culminating in a full house for the final on May 2 and 3. Fans packed into the Crucible in Sheffield to watch the World Snooker Championships on Sunday in what was the first near-capacity crowd at any sports event in the UK for over a year.

The FA Cup semi-final between Leicester and Southampton at Wembley on April 18 was the first outdoor sports event to welcome back spectators, though it was limited to residents and key workers living locally to the stadium.

The following weekend's Carabao Cup final was the first outdoor event attended by fans of the clubs involved. Manchester City and Tottenham were each able to offer tickets to 2,000 supporters.

The ERP continues on Saturday when 21,000 people are due to go to the FA Cup final between Chelsea and Leicester at Wembley, where Prince William is set to be on hand to present the trophy to the winners.

It was confirmed on Monday the Duke of Cambridge and FA president will attend the game.

The Government's announcement is a key milestone for clubs and associations which rely on spectators attending live events for much of their revenue.

Prior to the ERP, the last time spectators attended live sports events was December 2020, when crowds were permitted in tiers one and two of the Government's regional approach to tackling the pandemic which was in place at the time.