John Terry was accused of racially abusing Anton Ferdinand during a game between QPR and Chelsea in 2011; Terry was cleared in court but found guilty by the FA; Ferdinand made a documentary last year, in which it was claimed Terry had declined to address the issue with him

John Terry insists he has reached out to Anton Ferdinand regarding the allegation that he racially abused his fellow defender in 2011, but says his efforts have been spurned.

Terry was accused of using racist language towards Ferdinand during a game between QPR and Chelsea at Loftus Road in October 2011, for which he received a four-game ban and a £220,000 fine from the Football Association (FA).

However, the former Chelsea and England captain was cleared in court after being charged over the incident, and has always denied abusing Ferdinand.

Ferdinand took part in a BBC documentary last year called Football, Racism and Me that looked back on his clash with Terry, in which it was said that the current Aston Villa assistant head coach had declined to speak to him or participate in the show.

However, Terry has now disputed that claim and, in an interview with The Times, states he has reached out to both Anton Ferdinand and his brother Rio, who labelled his former international team-mate an "idiot" in his 2014 autobiography.

"It's disappointing to read and hear that I've never reached out," said Terry. "I tried to phone Rio and Anton on numerous occasions, literally the same night [as the game], the day after, and that week after the incident.

"Then about three, four years ago, I see Rio on the beach in Dubai, so I approached him and said, 'Have you got five minutes? I'd like to talk to you.' He was like, 'I don't want to talk to you, JT.'

"I was prepared to address the issue. I tried to phone Anton, Rio and his agent [Jamie Moralee]. And in the lead-up to the programme, my legal team had contact with the producers with the view to communicate but they were very evasive with the content and what they were trying to achieve.

"It was a lot bigger than it should have been for me. We could have dealt with the issue. I was very keen to get that done."

Terry was stripped of the England captaincy for a second time by the FA after being charged by the Crown Prosecution Service - a move that led to the resignation of manager Fabio Capello.

While he was cleared in court, Terry then retired from international duty after the FA opened its case against him, although he continued playing for Chelsea and then Villa until ending his career in 2018.

Asked directly whether he was racist during the interview, Terry said: "No, I'm not - racism is unacceptable," and appeared to suggest his portrayal in Ferdinand's documentary has ended any hope of talks between the two parties.

"It's been 10 years now, then to see the documentary and being made to look the bad guy in there... it's done. There's a line in the sand drawn.

"Anton can have his opinion. My opinion is very clear, I was not guilty in the court of law which is the biggest form of our law in our country. No higher."

Following the publication of Terry's interview on Saturday, Ferdinand hit back at his comments on Twitter, writing: "I never received a call personally from JT prior to the documentary or during the process.

"As I stated on the doc, the door is still open to have a conversation if he's serious about racism in football & wanting to create positive change. Call me then JT?"

Ferdinand: I was scared to speak out over Terry case

Anton Ferdinand says he was scared to speak out during his high-profile racism case against John Terry in 2011. 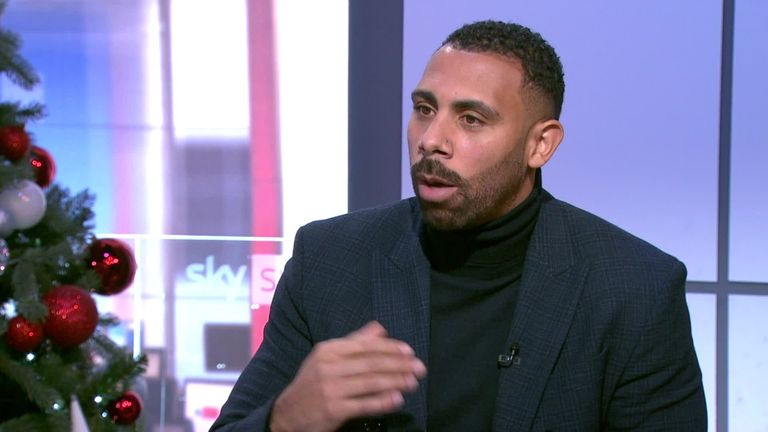 In an SSN interview in December 2020, Anton Ferdinand said he did not speak out during his high-profile racism case against Terry because he was scared for his career

Ferdinand said his silence was in part because that was what he had been advised, but also because he was afraid of the 'whirlwind' his comments would cause.

"I didn't feel like I was the right representation of our community in terms of speaking out and I don't think that I could have at the time anyway," he told Sky Sports News in 2020.

"I was scared to speak out and I see that now. I was scared of the whirlwind of what happened, the abuse on social media, I couldn't get away from it, it was always there.

"I felt like I just couldn't speak, not just because it would harm the court case, which was being drummed into me a lot at the time.

"I did something that I wish I hadn't done, which was I left it in the hands of the authorities and they failed me."