Marcus Rashford, currently on international duty with England at Euro 2020, is considering having an operation after playing through the pain barrier with a shoulder injury since November; Man United's opening Premier League game is on August 14 at home to Leeds

Marcus Rashford will wait until the end of Euro 2020 to decide whether to undergo an operation on his shoulder.

The 23-year-old, who is currently on international duty with England at Euro 2020, is considering going under the knife after playing through the pain barrier with the injury since November.

At the time, the forward tore a muscle in his left shoulder, but put off a decision on whether to undergo surgery until after the tournament.

The forward, who hasn't started a game for England at the tournament yet, could miss the start of Manchester United's Premier League season should he decide to have surgery.

"I'm not 100 per cent sure if I need it yet, so I'll just take it as it comes. I'll finish strong here and I've got a few weeks off to just relax and decide what I'm going to do."

Any operation and subsequent rehabilitation following England's participation in this summer's tournament could make him doubtful for Man United's opening Premier League game at home to Leeds United on August 14. 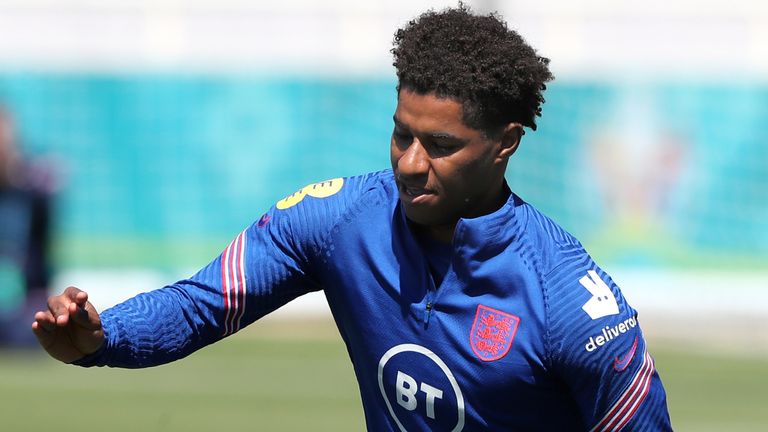 Speaking after England's Group D opener against Croatia, Rashford said he had no qualms with being left out of the starting XI, believing the whole squad will be used at some point in order to be successful at the tournament

On potential timeframes, Rashford added: "The doctors have not said yet. The reason I don't know is that when the season was going, and before I came here, I knew there was no chance I was going to be getting the operation, so I did not know how long the operation would put me out for.

"I am fully concentrated on here. When the tournament is finished, then I will ask the question."

Rashford went on to admit he hasn't been at his best for England so far this tournament but stopped short of blaming his injury problems for his current form.

"Obviously I am not performing at my best and what I know I can perform to," Rashford said.

"Whatever that is down to, it doesn't really matter because it has been going on since early on in the season. I managed to get through the season with United.

"I think I had 36 goal involvements so I can't look back at the year and say 'mmm, I should have taken time off to do this and do that'. That's just not the way I look at things. I just want to be available for every game." 'England do not feel pressure of past Germany defeats'

Rashford says this England squad is unburdened by disappointments of the past and fully focused on making history of their own against Germany.

Anticipation is already building ahead of Tuesday's Euro 2020 last-16 tie, with more than 40,000 due at Wembley as the Three Lions look to keep hopes alive of this being a summer to remember.

Standing in their way are a side with a history of breaking English hearts, from the 1990 World Cup and Euro 96 semi-finals to the 2010 World Cup round of 16.

The Frank Lampard ghost goal in Bloemfontein is Rashford's first memory of England matches against Germany, which goes some way to explaining why this group is not dealing with any baggage from previous meetings.

"We are being put in a position where we are blessed to be part of that history," Rashford said.

"Our main focus is to win the game, but if we do it gets put in history. That's how great teams are remembered for many, many years.

"There is no point fearing the past. You can't go back and change it.

"What we can change is the result of the next game and put ourselves in the best possible position to win the game." 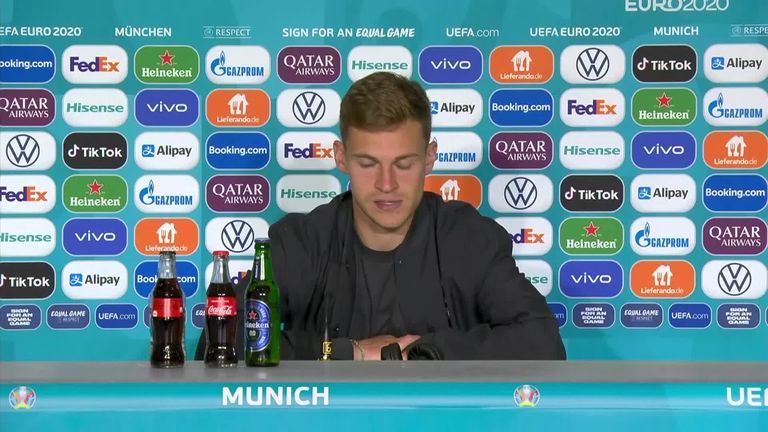 Joshua Kimmich reacts after Germany set up a Euro 2020 round-of-16 meeting with England, as they twice came back from a goal down to draw 2-2 with Hungary on Wednesday. (Pictures: ©UEFA 2021)

While next week's match will bring a sense of dread to some onlookers, Rashford made the point that "some of the players weren't even born" when some of the previous galling losses to Germany took place.

He also pointed to England's improved approach playing against top nations under Southgate, whose squad will not be getting caught up in the brouhaha surrounding the last-16 tie.

"Anyone who is a fan of football, you get built up for these types of games and rightly so," Rashford added. "In camp, it is different because as a player you have to be focused.

"You don't have time to get involved in that build-up because there's just too much emotion in the game and if you go on the pitch with all that build-up, we could end up with eight men on the pitch.

"So, yeah, we're just concentrated. We are going to have a proper training week and hopefully be at our best come the game."