Emi Martinez and Emi Buendia could return for Aston Villa in Saturday's Premier League game against Everton after completing their 10-day quarantine in Croatia.

The Argentina internationals are due to arrive back into the UK on Saturday morning, just hours before Everton visit Villa Park, and will be assessed before being considered for selection.

They have been training in Croatia since returning from South America following following the farcical scenes which saw Argentina's game against Brazil suspended.

Croatia is a green list country, meaning Martinez and Buendia are able to avoid having to quarantine in a UK hotel on their return.

Villa boss Dean Smith said: "We are expecting them to join us tomorrow (Saturday) morning and I'll assess it then and decide if they'll be involved or not.

"We have got their numbers of what they have been doing each day. That gets sent straight to the performance department and passed onto the coaches.

"They are in a good place physically which is what we need to know. I'll assess that in the morning and wait until tomorrow." 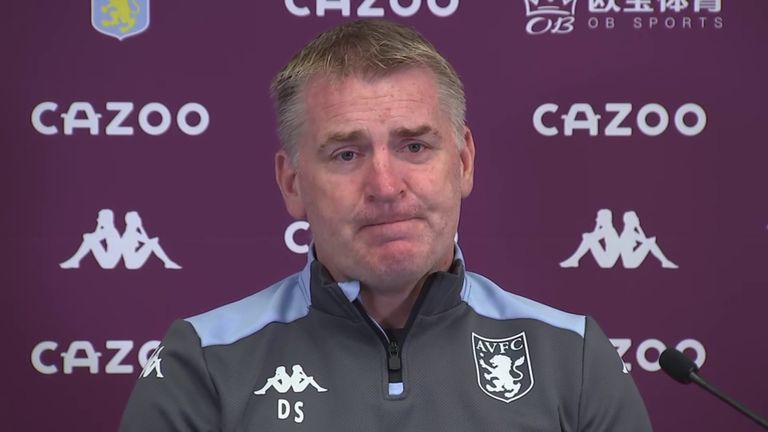 Last week Aston Villa boss Dean Smith said the club were in a difficult position with Martinez and Buendia isolating after joining up with the Argentina national team.

Without their two Argentines, Villa lost 3-0 to Chelsea last weekend with Tyrone Mings at fault for the second goal when Mateo Kovacic pounced on his poor backpass to score.

But Smith defended the England international and insisted he has responded.

He said: "I've not had to help him, I thought he dealt with it really well. He owned the mistake and held his hands up to the players and owned it on social media as well. He made a mistake, they happen in football.

"He has probably saved us 20-odd times before he made a mistake. As long as he keeps learning, and from what I have seen in training this week he has, he will keep getting better as a player."

FREE TO WATCH: Highlights from Chelsea's win over Aston Villa in the Premier League

Everton are unbeaten having won three of their opening four games under Rafael Benitez and Smith knows the next target for his improving side is to surpass the likes of the Toffees this season.

"After getting promoted, our remit was to stay up and we have progressed from 17th to 11th," said Smith, who is without youngsters Jaden Philogene-Bidace and Carney Chukwuemeka.

"The next step is the hardest because you have to try to go past established Premier League teams.

"Some of those teams have been top-four teams in the last decade as well, Arsenal, Tottenham and Everton come into that category.

"West Ham did brilliantly last season and we want to emulate that this season if we can.

"We haven't made as good a start as we would have liked but it's important the confidence we built up in the Chelsea game, despite the scoreline, is taken into the home game."