Celtic brought in 12 new players in the summer; Ange Postecoglou's side are four points behind leaders Rangers in the Scottish Premiership; they failed to win any silverware last season; watch Dundee United v Celtic live on Sky Sports on Sunday; kick off is at midday

Celtic manager Ange Postecoglou says he knows he has to bring silverware to the club even while rebuilding the squad for long-term success.

Celtic failed to win a trophy last season, conceding the Scottish Premiership title for the first time in 10 years and failing to reach the final of either cup competition.

Postecoglou, who brought in 12 players after taking charge in June, has already rectified the latter, guiding Celtic to the League Cup final where they will face Hibernian on December 19.

Postecoglou: I won't get three years to win a trophy

And the Australian is aware that achieving success is an essential part of the job.

"You take on the role of manager of this football club and you're not going to be given three years to win a trophy," he said.

"You've got to do that as soon as you arrive and at the same time as building.

"For us the challenge this year is we didn't inherit a settled squad, it was a squad that needed rebuilding for a number of reasons. It's not like we just went out and brought in players to complement what we had."

After an opening day defeat at Hearts, Celtic were stunned by Livingston as they struggled to find a run of form.

But they are now undefeated in the Scottish Premiership since that game in West Lothian in September and trail leaders Rangers by just four points.

But Postecoglou admits he still has work to do.

"We won't be able to have the squad I think we need, to have the quality to play consistently the high levels I want, until we get into another year of football.

"That's all in the background. What we need to do is make sure we keep improving our football in the meantime and giving opportunities for the guys we have to develop." 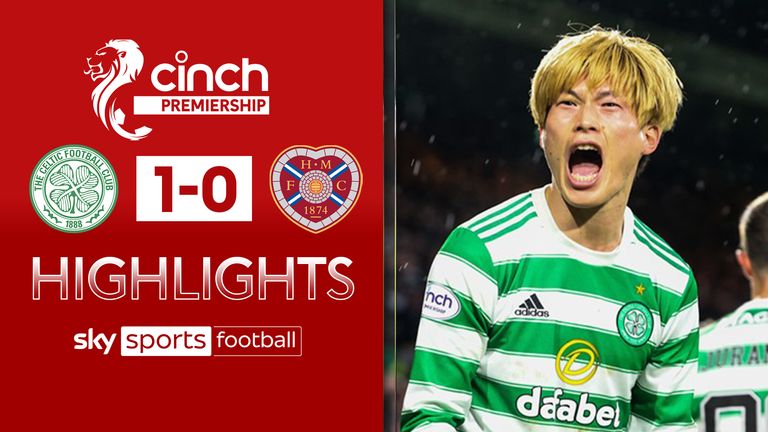 Highlights of Celtic's 1-0 victory over Hearts in the Scottish Premiership.

The manager feels the character and resilience his team showed against Hearts on Thursday night will be crucial during a hectic month.

Celtic lost three players to injury but held on for a 1-0 victory, their third consecutive one-goal win at home in the league, thanks to Kyogo Furuhashi's disputed first-half goal which looked marginally offside.

And with nine more matches to play until the winter break starts in early January, Postecoglou knows they will have to keep digging deep to maintain their momentum.

"It's important, especially the way we want to play our football," the former Australia head coach said.

"It's very hard to keep energy levels that high all the time for 90 minutes.

"In the context of a game, when a team is 1-0 down, they are going to take more risks and throw more bodies forward. Just naturally you are going to have to defend a little bit more.

"But I thought some of our football on Thursday was outstanding. I know what the headlines will be but I watch football differently, I look at what's actually happening, not just the outcome."

Celtic now face Dundee United at Tannadice on Sunday, live on Sky Sports, having drawn at home to Thomas Courts' side in September.

"So I am expecting a tough game but our away form has been really strong and we just need to continue.

Anthony Ralston, Jota and Stephen Welsh all went off injured against Hearts, although Cameron Carter-Vickers will return after a personal issue kept him out.

On the injuries, Postecoglou said: "It's always a worry but that's why we try and get players up and running. We have got a little bit more depth now than we had.

"We coped well with Carl (Starfelt) and Tommy (Rogic) being out for such a period. You don't want it to add up obviously but I think the squad is in a better position to cover absences at the moment.

"I'm hoping they are not significant but if they are missing for a couple of games then we have got players who can come in and do a job for us."