Kidderminster defender Geraldo Bajrami: “Yeah, 100% and I take pride in it. My Mum and Dad try to motivate me as much as they can but everyone has ups and downs in their careers and everyone’s journey to the top is different.” 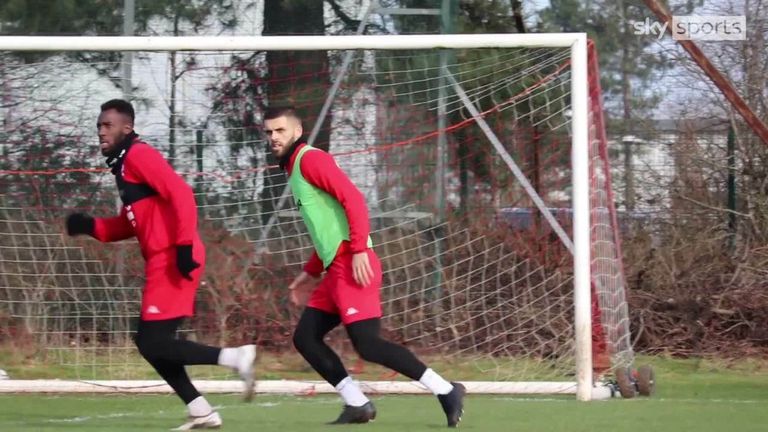 Kidderminster defender Geraldo Bajrami says he owes his career to his parents, who fled war-torn Kosovo in 1999 to provide him with opportunities.

Kidderminster defender Geraldo Bajrami is someone who never gives up. His family fled the Kosovo war in 1999 and he was born just two weeks after they arrived in the UK. Now he will be playing against West Ham in the FA Cup fourth round this Saturday.

"Yeah, 100% [I'm someone who never gives up]," he says with a smile. "And I take pride in it. My Mum and Dad try to motivate me as much as they can but everyone has ups and downs in their careers and everyone's journey to the top is different."

Different is certainly one way to describe Bajrami's path to the FA Cup fourth round tie against Premier League West Ham this weekend.

The 22-year-old Kidderminster defender was part of one of the upsets of this season's competition as the National League North side overcame Championship Reading in the third round. It was the result of a career of perseverance for Bajrami, which is now bearing fruit.

He was released by boyhood club Birmingham City last summer, but despite being brought up in Quinton, it's Albania that Bajrami calls home. His mother was heavily pregnant when his parents fled the Kosovo war in 1999.

"They came over here in order to give me an opportunity in life," he said.

"It's down to me now to try and make them proud. I thank them for everything, they've done a lot for me."

Bajrami was turned down twice by Birmingham City after trials at U10 and U11 but rather than it being the end, it was the thing that spurred him on.

My parents came over here in order to give me an opportunity in life. It's down to me now to try and make them proud. I thank them for everything, they've done a lot for me.

He added: "The first time they said 'not good enough', so I went back a year later and they said, 'you've improved but not quite enough.' At U14s I came back and they said 'he's not going to give up!' so I signed, then later went pro but ended up getting released last season and signing for Kidderminster."

There's no doubt the pandemic impacted Bajrami's fledgling Birmingham career. He made a first team breakthrough at the start of the 2019/20 season, making his debut in the same game as another youth graduate, Jude Bellingham.

He said: "We lost 3-0 at Portsmouth in the EFL Cup. It was the first time I'd played in front of a big crowd. I just enjoyed it. I didn't think I did too badly and neither did Jude to be fair."

A Championship debut followed but minutes dried up once the pandemic struck during a loan spell at Solihull Moors.

In contrast, it's been an unstoppable career trajectory for Bellingham and Bajrami is pleased for his former team-mate.

"He was always special, playing up against older players. It would be so easy for him. When he was 16 that's when he shot off. The Championship is a hard league to do it in and I'm not surprised he's doing what he's doing now in the Bundesliga."

Saturday will be a special occasion for the defender and his family.

He's captained Albania at under-21 level and this weekend against West Ham is another opportunity to prove people wrong.

"I was very emotional on my international debut for Albania because it was a big thing back home, in front of a big crowd and all my family but this is above that one now. I just need to enjoy the moment.

"It's not every day a non-league team goes into the fourth round playing against Premier League opposition and maybe cause, I'd say, one of the biggest upsets in FA Cup history."

Kidderminster manager Russ Penn is dreaming of history as his side prepare to host West Ham in the FA Cup fourth round on Saturday and knows the omens are good for the non-league side.

The impressive 2-1 win over Championship Reading last month earned Harriers a shot at a high-flying Hammers team in the hunt for Champions League qualification.

West Ham boss David Moyes will be in no mood to take this weekend's opponents lightly, given he was dumped out of the competition by Kidderminster as a player at Preston in 1994.

That victory was part of the Aggborough club's best ever run to the fifth round, where they lost to the Hammers, with Birmingham also beaten along the way when Blues were owned by David Gold and David Sullivan, the current co-owners of West Ham.

Penn said: "I said to the lads in the changing room after we beat Leamington that we have to believe history can be made one day, so let's hope it could be Saturday. We've given ourselves an opportunity to do that.

"We are in an empty book to be scripted and we will give it our best shot.

"I knew about the David Moyes link, but I completely forgot about Gold and Sullivan. This is what I mean, it is history. How many years ago are we talking? Twenty-eight years. It is unbelievable and these people are still in the game, which is why I have the utmost respect for David Moyes.

"What a manager to come to the place. I know he will respect us, respect the football club and respect the competition with the team he will put out." Non-league Kidderminster Harriers were understandably delighted after knocking Championship club Reading out of the FA Cup.

Former Harriers midfielder Penn wants Moyes to put out his strongest XI and talked about the importance of starting well.

The National League North team have played seven times since they stunned Reading on January 8 and their 36-year-old boss said West Ham coaches Alan Irvine and Stuart Pearce had been in attendance on four occasions.

"We would rather see the best out there to be honest, but I think even if they play their second team it will be a tough afternoon," Penn added.

"You would rather get the best of the best. This is our cup final. We have played seven games to get to this situation and if they want to shuffle the pack, so be it, but I believe they will play a strong side.

"What we don't want is to be embarrassed, that's a big thing for me.

"On the flipside, can we turn it into a positive and have a real good game? Can we start well, because all of a sudden as the minutes tick by the confidence around the whole place starts to lift. That is how you have to approach it."