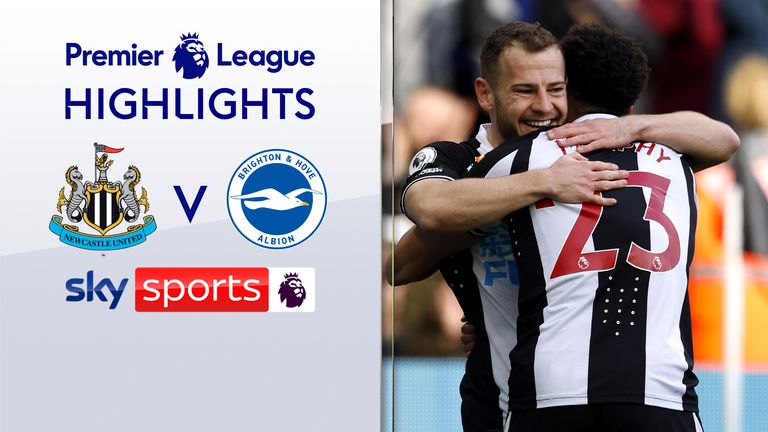 Newcastle extended their unbeaten run in the Premier League to eight matches with a hard-fought 2-1 win over Brighton at St James' Park.

Two first-half goals in quick succession from Ryan Fraser (12) and Fabian Schar (14) saw the hosts take a comfortable 2-0 lead, before the visitors responded through Lewis Dunk's header (55) early in the second half.

Despite Brighton's dominance after the break, Newcastle - buoyed by substitute Allan Saint-Maximin's return from a calf injury - held on to move seven points clear of the relegation zone. They stay 14th.

"I still think we're in a relegation battle and it's very important the players feel that because we can't let up, we can't stop," Newcastle head coach Eddie Howe said after the match.

"It's lifted us in terms of the points, but we haven't achieved anything."

Brighton had lost none of the previous nine Premier League meetings between the sides, but the result on Tyneside sees them slip to 13th. They have lost four league games in a row for the first time since April 2019.

Man of the match: Ryan Fraser.

Brighton dominated the early exchanges and central defender Shane Duffy was twice unable to hit the target from Pascal Gross set-pieces, with Joel Veltman firing high over in the meantime.

However, Newcastle took the game by the scruff of the neck inside three devastating minutes.

First, Chris Wood played the ball into Jacob Murphy's path and saw him leave defender Marc Cucurella trailing in his wake before lifting a shot over Robert Sanchez, and although his attempt came back off the upright, Fraser was on hand to finish on the follow-up.

Only two more minutes had elapsed when the Seagulls were hit again, this time when Schar climbed highest to head Fraser's right-wing free-kick firmly past the keeper.

With Gross repeatedly finding space between the Newcastle lines to link with Danny Welbeck and Tariq Lamptey, Brighton continued to cause problems, and goalkeeper Martin Dubravka had to be at his best to prevent the former Arsenal striker from reducing the deficit after Lamptey had intercepted Joelinton's ill-judged 29th-minute pass to Jonjo Shelvey.

However, they were unable to trouble Dubravka further and Eddie Howe's men went in at the break with their healthy lead intact and with Dan Burn and Murphy both having passed up opportunities to add to it as time ran down.

The visitors prospered on the ball once again after the restart and Shelvey had to get in an important 49th-minute block to prevent Leandro Trossard's shot from requiring Dubravka's attention.

They got their reward with 10 minutes of the second half played when Dunk met another Gross corner unopposed to head home from close range, and head coach Graham Potter responded by sending on Solly March and Neal Maupay for Lamptey and Jakub Moder.

Howe swiftly introduced the fit-again Saint-Maximin in a bid to introduce fresh forward thrust, but with the Seagulls using full-back Cucurella to target Emil Krafth, it was they who continued to pose the greater threat.

Dubravka had to turn away Dunk's looping 71st-minute header and field Trossard's snapshot with 10 minutes remaining as he and his defenders found themselves under siege, but managed to hold out.

Fraser's recent fine form continued against Brighton. The winger caused the away side problems all afternoon with his direct running and precise crossing before his eventual substitution on 79 minutes.

He was in the right place at the right time to score the opener after Murphy's initial effort hit the post. He then delivered an inch-perfect delivery from a free-kick two minutes later to give Schar the chance to head home.

It is the first time Fraser has scored and assisted a goal in the same Premier League match since April 2019. He now has two goals in his most recent five league appearances.

Nominated for February's Premier League player of the month award after scoring against Everton and providing an assist at Brentford, the 28-year-old shows no sign of letting up.

Howe: Difficult run of games ahead

Despite the result and moving seven points clear of the drop zone, Newcastle head coach Eddie Howe is taking nothing for granted with four away games at Southampton, Chelsea, Everton and Tottenham up next.

"We've got a really difficult run of games - we've got four away games, which I think for any team in the Premier League is very difficult, and also they are four difficult opponents, so today was very important," he said.

"I saw the players in the dressing room afterwards and it's a good sign. They're pleased, but they're not over the top in how they are feeling. They know we are still in the midst of a very important spell.

"We've come from a long way back and we had a lot of work to do. I remember sitting here after the Watford game at home and we realised we needed to win matches, draws weren't going to be good enough for us.

"But the players have committed to everything - again today physically, the shift they put in out of possession was huge, so the spirit and the resolve needed is there.

"There could have been improvements in our performance today, but at the moment, it's all about the results for us and it was another good one."

Brighton head coach Graham Potter was disappointed with a fourth defeat in a row but admitted his side got what they deserved despite a performance of some merit.

Asked if the Seagulls had deserved more, Potter said: "Performance-wise we did a lot well, I would say, but football is about scoring one more goal than the opponent and that's what Newcastle did, so in that respect, no. We deserve what we get.

"From our perspective, it was a blow to go 2-0 down so quickly after starting the game well, the better team and then 2-0, we have to recover, which we did.

"We weren't great in the first half overall, but I thought we were probably the better team, and then second half we improved again and scored a good goal, pushed and pushed. But it wasn't to be."

Howe working his magic on Tyneside

"Surely Newcastle are safe now," said Jeff Stelling on Soccer Saturday. It is hard to disagree.

No side is on a longer current unbeaten run in the Premier League than Newcastle, who are now without defeat in eight matches.

They have opened up a seven-point lead on 18th-placed Burnley and, though he won't admit it, deep down Howe will surely now be confident of guiding his team to safety.

On January 15, Newcastle were 19th on 12 points. They are now 14th on 28 and behind only Liverpool in the Premier League form table. St James' Park is beginning to feel like a fortress.

Some shrewd January signings, coupled with a real work ethic under the former Bournemouth boss, has the club dreaming again.

Newcastle's new owners will hope this brilliant run of form is just the start of an upward trajectory.

Newcastle travel to Southampton next in the Premier League on Thursday, March 10; kick-off 7.30pm.