Steven Gerrard exclusive interview: Aston Villa boss striving to close the gap to the elite ahead of Liverpool showdown

Steven Gerrard tells Sky Sports how he plans to take Aston Villa to the next level as he prepares to welcome his former club Liverpool to Villa Park; watch Aston Villa vs Liverpool live on Sky Sports Premier League from 7pm on Tuesday; kick-off 8pm

Steven Gerrard is preparing to face the club he represented more than 700 times as a player, led by the manager who gave him his break in coaching, in the knowledge that anything other than victory could be terminal to their Premier League title hopes.

The stakes could hardly be higher for Liverpool. But for Gerrard, speaking to Sky Sports at Aston Villa's Bodymoor Heath training ground straight after his press conference, there is no room for sentiment. "My job is to get the three points," he says.

Such an outcome would have a seismic impact on the title race but it would be significant for the home side too. Aston Villa sat 16th, only two points above the drop zone, when Gerrard arrived in November. A win over Liverpool would lift them into the top half.

Villa have not finished as high as that in over a decade and while Gerrard has more ambitious aims for the club in the long-term, bringing the run to an end this season would be a satisfying way to cap six months of steady progress since his appointment. 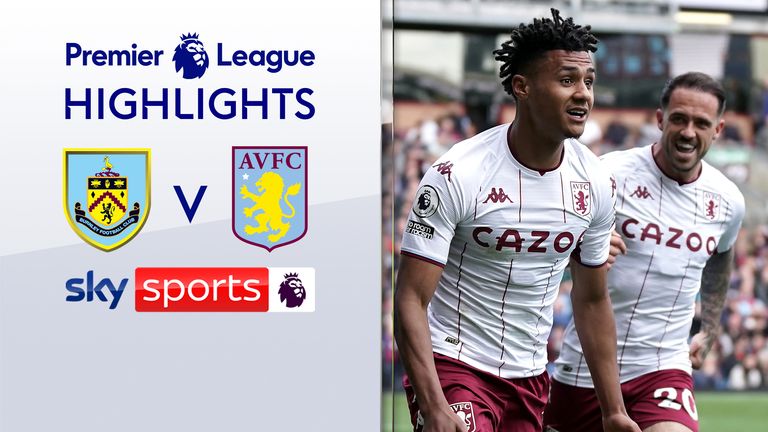 FREE TO WATCH: Highlights from Aston Villa’s win against Burnley

"I think the main positive is that the players are really happy and they have bought into our identity and our style," he tells Sky Sports.

"We have had a lot of success in a lot of games from how we set up and I think we are getting the best out of a lot of people.

"We still see a lot of areas where we can get better and improve. We've had patches of games where we've been very inconsistent. But I think that's down to individual moments or individual errors rather than how we set up or how we play.

"I feel the players are on board with the things we are trying to put in place and we are feeling more comfortable game by game."

Gerrard has had to do things on the fly having arrived from Rangers to replace Dean Smith three months into the season but efforts have been made to improve things off the pitch as well as on it.

"We have had to try to manoeuvre the team away from danger and get into a positive position in the table but alongside that we have analysed all of the players, all of the players we have on loan, and some of the staff," adds Gerrard.

"We have made some alterations around the building in terms of rules and other things, but this summer will give us a chance to breathe, reflect and reset. It will also give us the luxury of a pre-season, where you can really nail down your identity and style.

"To do that when you're playing every six or seven days is a real challenge because you get limited time on the training pitch, but overall it's been positive.

"I'm content with where we are and I see signs of progress."

The progress is most apparent in defence. Villa are compact and organised under Gerrard. Only four sides have conceded fewer goals or kept more clean sheets in the Premier League since his appointment while only three have faced fewer shots on goal or performed better in terms of expected goals against.

There have been 10 defeats - more than Gerrard would have liked - but only two by a margin of more than one goal. Villa are "a work-in progress", in his words, but they are already more difficult to beat.

"I think it's down to how we set up out of possession, our distances and our shape, but also a massive effort from the players in terms of their application and commitment, because they're the ones who are going out there and carrying it out," says Gerrard.

"When you come into a new job and you are bringing your style and your way, it's important you get buy-in from the players and these players have gone out and put their bodies on the line.

"They have really bought into our shape out of possession and that's helping us to defend better." They will need to continue in the same vein against Liverpool.

Villa had just 38 per cent of the possession during their 1-0 loss at Anfield in December and Liverpool's quality is such that the figure is likely to be similar at Villa Park.

For Gerrard, so accustomed to dominating opponents both as a player at Liverpool and as a manager in his previous role at Rangers, that change of dynamic has required some adaptation.

"It's different," he says with a smile. "But listen, you can still win football matches like that. A lot of the success we had at Rangers was in Europe, when we had less of the ball.

"There have got to be certain situations where you're prepared to counter-attack, to play a transition game, or counter press and steal the ball high up the pitch.

"Of course, in an ideal world, everyone wants the ball, and I think with time, and if we recruit well enough, we will improve our possession numbers because, ultimately, in the big picture, we do want to be a possession-based team that controls larger parts of games.

"But a lot of our top performances this season have come when having less possession and I'm OK with that. When you're playing against world-class players and world-class teams, at times you have got to be pragmatic.

"I don't think it works to be gung-ho and careless."

Least of all when you are coming up against players as deadly as Mohamed Salah, Sadio Mane and Luis Diaz.

"Of course, those three players have been a big part of our preparations," says Gerrard.

"In a game of this magnitude, you've got to try to stifle and limit those talented players because if you give them time and space and neglect them, they are very capable of hurting you.

"But they're not the only three. When you're talking about the top teams at the top end of the Premier League, normally they are littered with top international players.

"That's the size of the challenge, but at the same time, if you can manage to get the best out of your team, if your top players can step up and everyone can go above and beyond, nothing is impossible."

Gerrard wants his players to approach Tuesday's game with that idea in mind but in the longer term, he hopes Villa will go into meetings with the Premier League's elite as more of a match for them.

He began the process of strengthening his squad towards that aim with the additions of Philippe Coutinho, Lucas Digne and Calum Chambers in January and sees this summer's transfer window as an opportunity to continue fine-tuning his personnel.

"We have got a lot of volume here, so I see it as more about quality than quantity," he says of the summer ahead. "I don't think we need to go and rip everything up and start again.

"We had a positive window in January where we tried to add players who could enhance what we already had and now it's a case of adding quality to take the team to the next level.

"I don't think we need numbers. We've already got a lot of options. But there are areas of the team where we would like to add some quality because we think that can help us take huge strides."

He hopes Coutinho will be part of it. The Brazil international had to settle for a place on the bench in Saturday's 3-1 win over Burnley, with Emiliano Buendia shining in his place, but Gerrard is eager to make his loan permanent and sees competition for places as healthy.

"When we decide to play with one number 10, it may be that only one of them can play, but I've shown many times that we can play with two number 10s in the team and I think they are both capable of playing as eights as well in certain situations," he says.

"Ultimately, they are two great players and I'm lucky to have them at my disposal. We rested Phil on Saturday and Emi was fantastic, but that was Burnley. Liverpool is a different game and I'll pick the team that I think is going to do the best job.

"Of course, my job is to manage the situation when players don't play, but I'll always be honest and authentic with them. I'll never blank them and. I'll always explain my reasons. Not everyone can play every game, but at the same time the squad is really important over the course of the season."

Liverpool's visit to Villa Park is a formidable test of their progress so far this season. Does Gerrard, who spent the first year of his coaching career working in his former club's academy, see any lessons for Villa in their rise under Klopp?

"I'm not sure lessons is the right word, but what I will say is that he's obviously had fantastic support from the owners," he says. "He's been given time to build and time for the progress to happen.

"When you go into these clubs, it does take a certain amount of time. It's very difficult to change everything overnight. But I'm also aware that it's a results business and I'm not neglecting that.

"We just have to make sure we make the right decisions and everyone is pulling in the right direction. When everyone is aligned and connected in how to take things forward, I think that is when you get to the end destination quicker."

That alignment is clear to see at Liverpool and Gerrard believes the same applies at Villa, where he is working closely with chief executive Christian Purslow and sporting director Johan Lange. "We have owners who have invested in the team and shown incredible support," he says. "We are all on the same page and we are really ambitious."

It will certainly require some ambition if Villa are to take points off Liverpool but Gerrard's determination to do just that is obvious.

"We know there is still a gap to teams like Liverpool but it's our job to do everything we can to close it," he says.

"That is what we're striving for."