Newcastle 2-0 Arsenal: Mikel Arteta admits his side 'had nothing' as Granit Xhaka questions team-mates

Arsenal must beat Everton on final day and hope Spurs lose at Norwich to reach Champions League; Gunners had top-four spot in their hands, but lost 2-0 at Newcastle after defeat at Spurs last week; Arsenal "nowhere near the level if we want to play Champions League," said Mikel Arteta 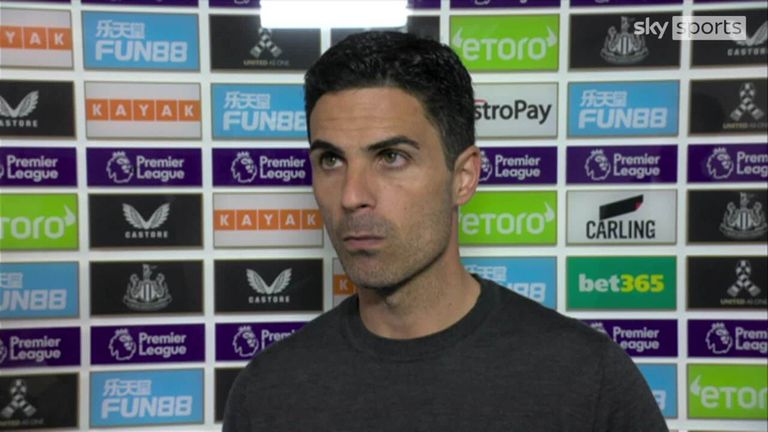 Arsenal manager Mikel Arteta says his side were beaten by the better team in their 2-0 defeat to Newcastle, which leaves them struggling to finish in the Premier League top four

Mikel Arteta admitted Arsenal had "nothing in the game" as they slipped to a 2-0 defeat at Newcastle that could prove terminal for their chances of qualifying for the Champions League.

The Gunners knew a win at St James' Park followed by victory at home to Everton on Sunday would secure their return to Europe's top club competition for the first time since the 2016/17 season, but were second-best throughout as Ben White's own goal and Bruno Guimaraes' late strike saw the Magpies earn a deserved win.

Arsenal's defeat came on the back of their 3-0 loss at north London rivals Tottenham, who will guarantee a place in the top four at the Gunners' expense if they avoid defeat at Norwich on the final day of the Premier League season.

Arteta's side had a four-point lead over Spurs with just three matches to play, but now face missing out on the top four for a sixth successive season, and the manager said he was "extremely disappointed" after witnessing a performance he admitted was "nowhere near the level if we want to play Champions League football".

"It was a really difficult night to swallow," Arteta told Sky Sports. "Newcastle deserved to win the match comfortably, they were much better than us from the beginning to the last minute. We had nothing in the game.

"They were much better in every department. We were poor with the ball. A lot of things happened during the night, with the substitutions we had to make through injuries, but it's not an excuse. Newcastle deserved to win the match."

Asked what he told his players in the dressing room following their damaging defeat, Arteta said: "I'm extremely disappointed. That Newcastle were 10 times better than us and fully deserved the match.

"The performance was nowhere near the level if we want to play in the Champions League.

"When you see the team we have at the moment there are a lot of question marks in a lot of different positions, because of the injuries and suspensions we had. But it is not an excuse. Today we weren't at the races." Arteta admitted he was concerned as soon as the game began with his side's performance, adding: "We tried to change some things, but the execution was so poor and the goals we gave away were extremely poor."

The manager also conceded the side he put out at Newcastle, which featured just two players over the age of 24, may have lacked the necessary experience for such a crucial fixture in front of 50,000 raucous Newcastle supporters.

"That's what we have to think about," he said. "It's true that we could not cope with the game we had to play here."

But despite his obvious frustration at the way Champions League football has slipped from his side's grasp, Arteta urged his side not to give up ahead of their final game of the season at home to Everton on Sunday.

"There is always a chance in football and you have to be there just in case that chance appears," Arteta said.

Xhaka: If you're not ready, stay at home 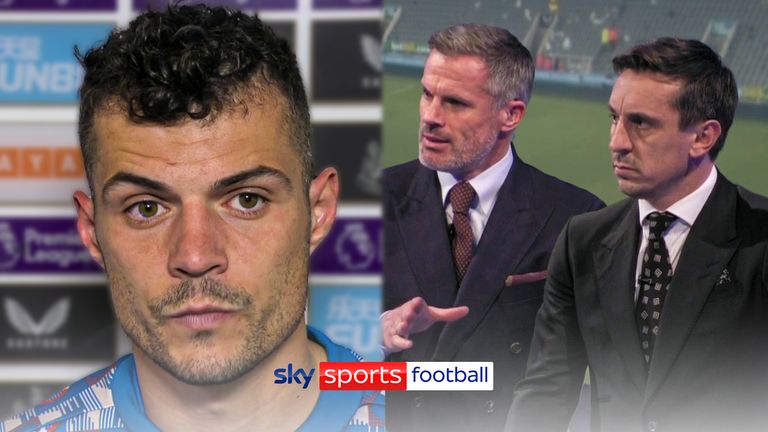 Granit Xhaka was one of just two players aged over 24 to start for Arsenal at Newcastle, and he did not hold back in his assessment of his team-mates' performance when asked why they had failed to step up in such a pivotal match.

"We need people to have the balls to come here and play because we knew this game is one of the most important for us. To perform like this is not acceptable. It's very, very sad for us, very disappointing and I feel very sorry for the people who came here to support us.

"This is not the way we wanted to go. This is all I can say, to say sorry to them. I don't have any other words."

Xhaka admitted he was unsure why his team failed to match a Newcastle side who have nothing to play for other than their final placing, adding he and his team-mates had failed to carry out Arteta's instructions as St James' Park.

"We didn't do what the game plan was, not listening to the coach and doing our own things and these games happen," he said.

"I don't know why we are not doing what the coach is asking of us."

Jamie Carragher questioned what he saw as Granit Xhaka's criticism of the young players in Arsenal's team after their damaging loss at Newcastle.

Carragher told Monday Night Football: "He's come out really strong and we like players to be honest. He's having a go at his own team-mates really and saying they weren't ready.

"But I know from my own experience it's easy to come out and be really strong with your words at a time like that, and maybe he'll get a little bit of credit for it. But do it on the pitch.

"I think he's putting it on some of the younger players - maybe he didn't feel they were ready or maybe I've got the wrong gist of the interview. But it was almost like an experienced player saying, 'some of these people weren't ready, they weren't up for the fight'.

"I love players being honest and straight, but he was part of that. It's not like two or three players have let them down. That was everybody."